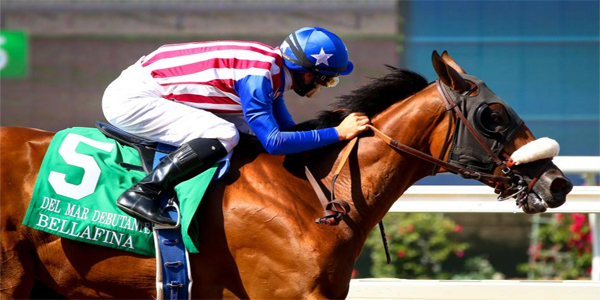 A fine race card at Oaklawn Park on Saturday features two terrific sprints, including the Carousel Stakes. This race for fillies and mares of four or more years old is the 10th race of 11 on the schedule for April 25.

The $125,000 guaranteed six-furlong sprint features some really big names and a ton of stakes experience. Eight horses are entered into the race that immediately follows the Bachelor Stakes, which we’ve also previewed here at BangTheBook.com.

There are 43 combined victories in this field and a whole lot of money earned. This race also features the return of Bellafina, who drew the rail post and will be the favorite for Saturday’s Carousel Stakes.

Here are the post positions for the field and the trainer and jockey combos with the morning line odds from the racing form:

If things go as I hope (spoiler alert), there could be the opportunity for back-to-back wins for the Asmussen/Santana tandem if Echo Town and Mia Mischief can cross the finish line first on Saturday. Both would have to overcome favorites, as Bellafina is the clear 8/5 favorite here, but prices are pretty spread out for the field otherwise.

Mia Mischief’s nine wins are the most of any horse in the field, but her 20 races are also tied for the second-most of the eight in the field.

Bellafina has gone off as the favorite in seven of her last nine races, but this is her first visit to Oaklawn Park, so we’ll see how that goes. In fact, this is a rare track for a lot of these horses. Amy’s Challenge has seven career starts at Oaklawn with six finishes on the board. What A Fox has six Oaklawn races and three wins, including two here in 2020. Mia Mischief has three wins and two places in five tries at Oaklawn.

This is a strong field and a tough handicap, so let’s break it down and see what we come up with:

Bellafina has the most impressive set of races of any of these horses. Joe Talamo draws a very accomplished four-year-old for his first ride atop the daughter of Quality Road. Bellafina has not won in her last five efforts, but she won the Santa Anita Oaks last year after wins in the Las Virgenes Stakes and the Santa Ynez. She was actually a disappointing fifth as the favorite in the Kentucky Oaks and then finished third to Covfefe and Serengeti Empress next time out in the Test Stakes at Saratoga. She has powerhouse speed numbers and has run against some of the best, but she’s also come up short five straight times.

The distance is interesting here for her. She hasn’t run just six furlongs in a very long time and she’s been a closer at times and a pacesetter at other times. Talamo will need to use his inside position to get out fast and attempt to pace the field here so that her speed can shine for the duration of the race. When she’s been good, she’s been great. When she’s been okay, she’s been very good, in the sense that some of her second-place finishes have been well ahead of the third-place finisher. She’ll have to be great here.

Midnight Fantasy is one of two Joe Sharp horses in the race. Martin Garcia draws the mount here for a horse that has had some extremely good speed figures lately, including a win last time out in the Spring Fever Stakes at Oaklawn Park back on February 29. She won by a neck over Amy’s Challenge at 5.5 furlongs at 8/1.

Midnight Fantasy is a true sprinter, as she hasn’t run a mile in over a year. She’s had some outstanding workout times in the lead-up to this one as well. Had the race gone another half-furlong, Amy’s Challenge would have won. Midnight Fantasy had big speed from the outside on the last turn and it seemed to tire her out over the last dozen strides. She’ll get caught in a race like this if that happens again.

Sunny Dale could be really interesting in this race. She doesn’t have some of the raw speed figures of some of the other horses, but she’s won three straight and Jerry Hollendorfer has gotten Joel Rosario to jump on the daughter of Medaglia d’Oro. This is the first stakes race for Sunny Dale after finally breaking her maiden back in February. Three races, three wins at Oaklawn Park.

Sunny Dale has been the favorite in four of her last five races. They have all been with Martin Garcia, who now rides Midnight Fantasy. With some strong workouts and a world-class jockey in Sunny Dale, this is a horse likely to see a price decrease as Race 10 approaches on Saturday.

What A Fox for Robertino Diodoro and David Cohen doesn’t have enough high-end efforts to feel like a big threat here. This is her second stakes race and she gave a game effort last time out in the Spring Fever, but she wasn’t particularly close to Midnight Fantasy and Amy’s Challenge.

Interestingly, Orlando Mojica is on hand and is riding Sir Rick in the previous race, but Diodoro and owner Lawrence Roman are going back to Cohen, who won with What A Fox at Keeneland back in October. The workout times haven’t been great and her closing style looks unlikely to work with a field of this caliber.

Classy Act is the second longest shot of the field for Sharp’s other entry. Jockey Adam Beschizza is really familiar with the five-year-old daughter of Into Mischief, having raced several stakes event with her in 2019 and one in 2020. Most of her stakes races have been on turf, but she enters into this race anyway. The workouts have been strong of late, but she doesn’t have the top-end speed or the ceiling to really factor in this race in all likelihood.

Amy’s Challenge would have won the Spring Fever with another half-furlong in length, but she had to settle for second. She’s hit the board in six of seven starts at Oaklawn, all with Alex Canchari in the irons. Canchari is a low-percentage jockey, so it seems unlikely that Amy’s Challenge will get a lot of love heading into this race.

Her 4/1 price is a nod to her stakes races of the past and some big speed figures that she has had in those efforts. Maybe that will be enough, but Canchari squandered a big speed figure in the Spring Fever. But, he does get that extra half-furlong here. Something to keep in mind here is that Amy’s Challenge is typically a pacesetter. In that race, she came from off the pace to make up some ground. Perhaps Canchari has a better ride here?

Lady Suebee is the long shot of the field at 20/1. She’s run plenty of stakes races, but only won once in nine tries in 2019 and is 0-for-2 in 2020. She’s finished off the board in both Oaklawn races this year. She’s gotten out front and faded later in the race, but now she is running a sprint instead of a distance race.

Lady Suebee has not run under a mile on dirt since last April. She’s had three turf sprints, but nothing on dirt. In the dirt races, she’s been ahead at the midway point in all four of them. With a shorter race now, Lady Suebee all of the sudden becomes a horse that could run up front and then have enough to hang on. Of course, she’s also facing a really good field.

Mia Mischief is only topped in career earnings by Bellafina as far as the Carousel Stakes field goes. She draws the far outside post for Ricardo Santana Jr. and Steve Asmussen in this one. Santana was back in the mount for Mia Mischief last month when she came off the shelf to win an allowance optional claiming by 2 1/4 lengths over Shanghai Tariff. It was her first race since November and she looked pretty good in the process.

The five-year-old mare has had some really big speed numbers and her lower-end performances of late are at the higher end of the spectrum for some of the entries in this field. She is a stalker with a closer’s attitude and that is the right type of style for a spring like this. Furthermore, Santana knows here and has run her at a variety of different tracks at the behest of Asmussen. Santana’s been the best sprint jockey at Oaklawn this year, which doesn’t hurt one bit.

Once again, give me the Asmussen/Santana connection and Mia Mischief. She’s hit the board in 16-of-20 lifetime and been either first or second at Oaklawn in all five. She came up short in the two races at Saratoga, but has been money just about everywhere else.

Bellafina puts up speed numbers that are impossible to ignore, even if she doesn’t like winning for some reason. She doesn’t have Guarana or Covfefe or Serengeti Empress in this race. She’s very likely to hit the board and finish in the top two.

An exacta box with 1/8 is my favorite bet of this race, but what’s the fun in that? I think Sunny Dale just might be a late bloomer. She ran a lot as a three-year-old, but it never fully came together. Now she’s at Oaklawn, where she’s 3-for-3 and draws one hell of a rider in Rosario.

I don’t think Amy’s Challenge can pace the field here and I don’t love her closing ability. She’s the one cut off from the exacta box.