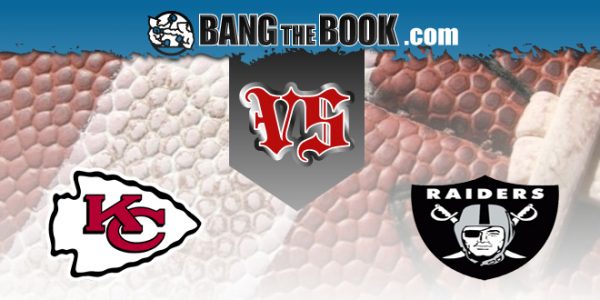 One of the reasons the Chiefs are favored by so much in this matchup is that the Raiders got hit pretty hard this past week by COVID-19, or to put it more specifically, they were hit by positive tests and / or contact with people who had been tested positive. As a result, ten members of the defensive rotation had to go into self-isolation, and we’re not sure how effective Zoom meetings are in combating a quarterback who may just be on his way to setting the one-season record for best touchdown-interception ratio.

Right now Patrick Mahomes, coming off an MVP season, followed by a world championship season, has thrown 25 TD passes with just ONE interception. So it is safe to say that when you’re facing a possible rookie of the year at running back (Clyde Edwards-Helaire, at 4.7 ypc), along with possibly the best group of receivers in all of football (with apologies to the Buccaneers), you might want to have all hands on deck.

One of the operative factors in this game involves how the Chiefs are going to deal with Derek Carr, or more specifically, how they are going to deal with Carr differently. When a guy like Carr lines up, you know you’re not going to get a lot of attack down the field. That’s okay with Jon Gruden, as long as he can get some support from the running game. The Raiders had 144 rushing yards on the way to their highest yardage total of the season in the first meeting, when they scored 40 points.

And then they made a mistake…… maybe.

The way the story goes, the Raiders got into their team bus after that game and took what was referred to as a “victory lap” around Arrowhead Stadium. Andy Reid wasn’t happy about it; we’re sure the KC players have been talking about it.

That is something that might have a bearing on the pointspread outcome, even if it doesn’t fit into your analytics.

But hey – let’s talk about some trends. Anyone who follows the NFL to any degree is well-acquainted with the fact that Andy Reid is always incredibly tough when he comes back after a bye week. This was a topic of conversation before the Super Bowl. Reid’s teams have gone 18-3 in those situations.

What might be even more significant is that the Chiefs have won their last eight games when taking their act on the road, covering seven of those games.

Is this number out of line? Yeah, it might be. It might not line up with your power ratings. But remember that if a “home field advantage” exists at all here, it is negligible. The Raiders hardly even know their new home. And there is no “Raider Nation” to cheer them on. So should you even figure that into the formula?

And how do you factor in the notion that the Chiefs – a team that is perfectly capable of doing it – might run it up if they get the chance? At Allegiant Stadium, this Las Vegas team lost by a touchdown to Buffalo and was blown away by Tampa Bay.

Needless to say, the Chiefs won’t have to take a bus ride around the new ballpark. But they could go play a few slot games, or get their own victory lapdance, wherever they’re letting people in on the Strip these days. Lay it with KANSAS CITY.

BetAnySports brings you a lot of different ways to enjoy Sunday night action with a load of props….. Reduced juice gives you more value in the odds, and when you access Sports Betting Prime, you can make real-time wagers while the game is in progress……. Open up your account using a debit card, credit card, person-to-person transfers and the virtual currency of Bitcoin, which never incurs a transaction fee!