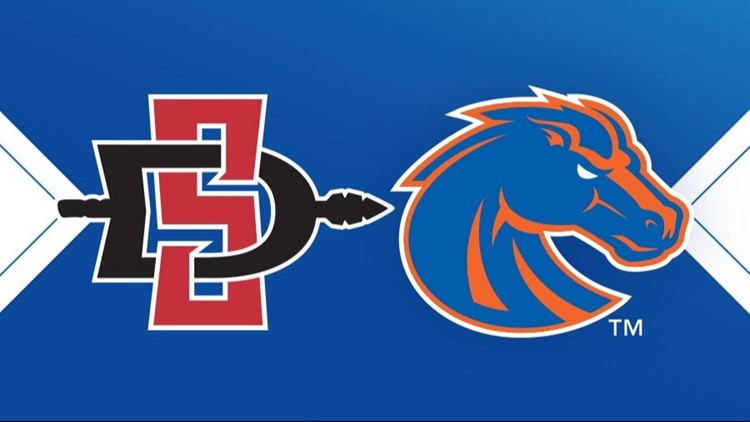 The 2021-22 college basketball season continues Tuesday, February 22, with the Mountain West Conference battle from ExtraMile Arena in Boise, Idaho, so we bring you the best San Diego State vs. Boise State betting pick and odds.

The Aztecs meet the Broncos for the second time this term. Back on January 22, Boise State outlasted San Diego State 42-37 as a 4.5-point road underdog. This time around, the Broncos are small 2.5-point home favorites with a total of 121.0 points on BetOnline Sportsbook.

The San Diego State Aztecs improved to 17-6 straight up and 12-11 ATS on the season following a 61-44 thrashing of the Fresno State Bulldogs this past Saturday. It was their fifth consecutive victory, as the Aztecs easily covered a 2.5-point spread away from home.

San Diego State shut down the Bulldogs, holding them to 34.1% shooting from the field. On the other side of the ball, the Aztecs made 47.9% of their field goals and 45.0% of their triples (9-for-20), while sophomore guard Chad Baker-Mazara led the way with 20 points and three rebounds.

The Aztecs are now sitting at the third spot of the MWC standings with a 9-3 record. They are No. 32 in the latest NCAA NET Rankings and No. 23 in the KenPom rankings. San Diego State boasts the best defensive rating in the country, allowing only 85.8 points per 100 possessions.

Boise State is No. 1 seed in the MWC

The Boise State Broncos (21-6; 14-12 ATS) improved to 12-2 in the conference play following a 68-57 victory to the Utah State Aggies this past Saturday. They covered as 3.5-point home favorites, recording their second straight win and fourth in the last five games overall.

The Broncos outlasted the Aggies thanks to their excellent defensive performance in the final three minutes of the second half when they allowed only a couple of points. Senior guard Marcus Shaver led the way with 20 points, three steals, and a pair of dishes, while freshman forward Tyson Degenhart added 12 points, seven rebounds, and a couple of steals and blocks.

Boise State is topping the Mountain West Conference at the moment, half a game ahead of Wyoming. The Broncos are No. 30 in the NCAA NET Rankings and No. 26 in the KenPom rankings. They own the 11th-best defensive rating in the nation, yielding 90.3 points per 100 possessions.

Defense shined in that first meeting of the season between the Aztecs and Broncos. San Diego State shot 31.1% from the field, while Boise State made 28.1% of its field goals. The Broncos nearly blew a double-digit lead, but they managed to keep the Aztecs scoreless through the final 2:48 of the second half.

This one could easily go either way, as both teams lean on a stout D and love to play at a slow pace. Also, they rely on a bunch of upperclassmen, so I’m expecting a thrilling battle down the stretch. Betting on Any Team to Win by 5 or Fewer Points at +170 seems like a way to go if you want to take a risk.

Over the last few years, the Aztecs have dominated the Broncos, going 6-1 SU and 5-2 ATS in their previous seven encounters.

The only reasonable bet in this game is the under even though the line has been set pretty low. I’ve mentioned how good these two schools have been defensively thus far. Furthermore, the Aztecs average 65.9 possessions per 40 minutes (275th in the country), while the Broncos register 65.4 (303rd). The under is 3-2 in the last five meetings between the Aztecs and Broncos, and it is 6-3 in their previous nine encounters in Idaho.