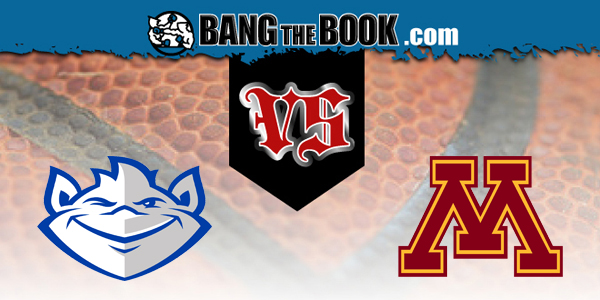 We’ve got quite a fun Sunday lined up in college hoops with a ton of games and some really interesting matchups. We’ve got a handful of conference clashes on the docket as well, as teams position themselves for what they hope will be some meaningful games in February and March.

We’ve also got a non-conference game of interest in the primetime window tonight. That will be the spotlight game for us here at BangTheBook in Game 741/742 between the Saint Louis Billikens and the Minnesota Golden Gophers.

BetOnline Sportsbook lists Saint Louis at -2.5 with a total of 146. There hasn’t been much movement on the side from the overnights, but the total has gone up a point. This one starts at 8:30 p.m. ET and can be found on FS1 from Williams Arena in Minneapolis.

We’ll preview the game and break it all down with a free pick at the end.

A Billiken is said to be a “good luck figure” and was a creation of art teacher and illustrator Florence Pretz back in the early 1900s. So far, Travis Ford’s team has found lots of good fortune this season, though the Billikens have made their own breaks as well.

Saint Louis is off to a 6-0 start, including impressive wins over LSU and North Carolina State. This will be the team’s first appearance outside of Chaifetz Arena on the SLU campus, so we’ll see if the travel has any impact. It certainly could, as Saint Louis is third in the nation at 44.6% from 3 and 42nd in the nation at 56.3% from 2. Shooting numbers tend to be lower in road and neutral settings, simply because the sightlines and the shooting backdrops are a lot different.

Saint Louis is eighth in eFG% on offense at 59.5% and also 15th in OReb% at 37.9%. They haven’t missed many shots and they’ve gotten back a lot of their misses. Against NC State last time out, Saint Louis had 15 offensive rebounds and a 53-26 edge on the glass overall.

Minnesota will look to rebound from the first setback of the season. It was a pretty big setback, a 91-65 loss to Illinois in Champaign. Like Saint Louis in this spot, that was the first road game for Minnesota and it looked like it, as they scored a season-low .802 points per possession. The Golden Gophers were just 19-of-69 from the floor, while Illinois shot 34-of-64 from the field.

Prior to that, it hadn’t been the most impressive start to the season for Richard Pitino’s team anyway. In a second consecutive game against Loyola Marymount following a 15-point win, the Golden Gophers only won by three. They needed overtime to beat Boston College at home. It is a bottom-line business, but lackluster shooting numbers have hurt in the early going.

Minnesota has taken terrific care of the basketball and ranks 14th in TO% on offense. The Gophers have also gotten to the line a ton thus far, but that usually requires a lead, something that they may not have in this game. Minnesota is only shooting 28.5% from 3, which is how this game could get away from them. Saint Louis has been a sharp-shooting team from distance to this point.

This is an extremely experienced Minnesota team, but how much does experience matter when the team finished 15-16 with an 8-12 record last season? Interestingly enough, though, when everything came crashing down for the 2019-20 season, Minnesota was the 27th-ranked team by Bart Torvik, despite the losing record.

We are going to find out a lot about both teams here. Saint Louis is leaving home for the first time and Minnesota has a crack against a high-quality foe. My play here is on the under. Both SLU and Minnesota are playing faster than they previously did, which I don’t think is a big tempo change, rather a commentary on who the teams have played.

Saint Louis’s shooting numbers should regress hitting the road and Minnesota’s tempo should slow down as they keep going forward. Wait on this one, though, as it seems like the total is going to rise. I have to take the under at 146, but I think you can do better by being patient.