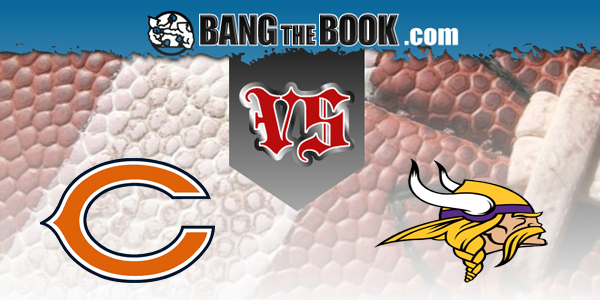 The Chicago Bears finally got a breakout game from their offense last week, but as far as sustained results are concerned, we’re not sure they’re ready for that yet.

The Minnesota Vikings may have some issues to sort out on special teams if they are going to keep their hopes for a wild card berth alive.

The Bears and Vikings both have 7-6 records as they head into Sunday’s game at U.S. Bank Stadium in Minneapolis.

Don’t look now, but the Bears showed a real offense last week, in a rather unexpected 36-7 win over Houston. They had the numbers – an 80-yard run by David Montgomery, 267 passing yards from Mitchell Trubisky and 123 yards in catches from Allen Robinson.

So how much of that can be duplicated? We have seen way too much disappointment from this Chicago offense, which has been depressign on far too many occasions to think that suddenly it is coming around with Bill Lazor making play calls. If you remember, Matt Nagy, perhaps looking to take some pressure off himself, turned those responsibilities over to Lazor before the last meeting with Minnesota.

That didn’t turn out too well, as the Bears managed just 165 yards. Nick Foles had absolutely no time to throw. And let’s not forget why Trubisky was replaced by Foles in the first place. He was way too inconsistent and didn’t have enough time to make plays.

Minnesota’s defense has not necessarily been a stellar unit, but it is in no way as bad as they have in Houston. So don’t get overly excited about last week’s result.

The Vikings also hope that last week’s result wasn’t a harbinger of things to come. In their 26-14 loss to Tampa Bay, they could not protect Kirk Cousins, allowing him to be sacked six times. And while Minnesota had 27 first downs, they averaged only 4.4 yards per play. To top things off (or bottom them, as it were), kicker Dan Bailey missed three field goals – from 36, 46 and 54 yards. In the last two games, he’s missed four field goals and three extra points. But head coach Mike Zimmer says he is sticking with Bailey, so he did not cut him.

The way we see it, the real battle in this game is between Minnesota’s offensive line and Chicago’s defensive front. And we’re thinking the Vikings could conceivably win that battle, since they have the most dynamic force on the field in running back Dalvin Cook. But last time against the bears they averaged only three yards per carry. This team, which has run the ball 47.6% of the time, has reduced that to just 41% over the last three games.

Few teams run the ball as seldom as Chicago (just 34%), and this was the case even before Montgomery got injured. So expect that the Vikes will tee off on Trubisky or whoever else takes snaps for the Bears.

We’re just not big Bears believers. It’s not such a big matter of execution, but instead involves the offensive concept. And Minnesota seems to have a lot of that figured out. But Chicago may be able to force the Vikings into what they don’t do best. These last three meetings have totaled 94 points. We’ll go UNDER the total here.

BetAnySports knows how to add to the excitement of pro football betting. It starts with how easy it is to open an account, with debit card, credit card and person-to-person transfer options, as well as Bitcoin…… Then there is reduced juice, which gives you a better break on the odds, and then if you want to stay with the action even after the kickoff, you’ve got Sports Betting Prime for real-time wagering!