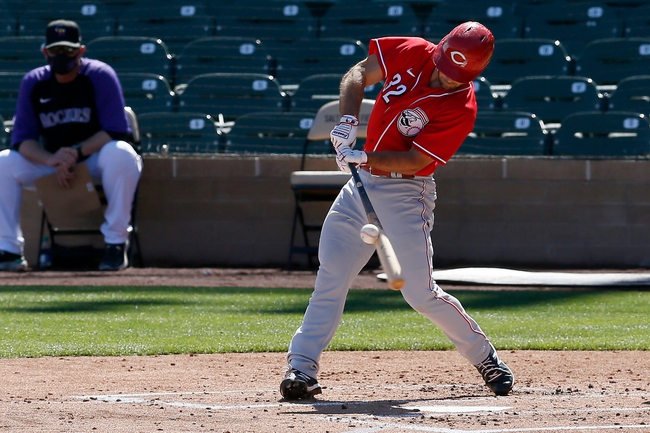 Wade Miley will be the second pitcher to make a start following a no-hitter against the Cleveland Indians this season. Miley seemingly has a lineup on the same level to face, but he’ll be forced to do so at Coors FIeld, which is quite challenging for any and all pitchers. The Reds and Rockies are lined pretty evenly for this one at BetUS Sportsbook with a total of 10.5.

It will be German Marquez for the Rockies, who have looked like a Little League team on the road, but have been quite good, at least by their standards, at home this season. As a result, we see the Rockies as a favorite, but only a small one.

Let’s look at this Friday matchup and see if we can find a good play.

However, after that hot start to the season and the offensive onslaught that was unexpected to say the least, the Reds find themselves around .500 during this series with the Rockies.

This start was supposed to go to Luis Castillo, but Miley was pushed back a day to get some extra rest after his complete game masterpiece against the Indians. Miley only faced two over the minimum in that May 7 start with eight strikeouts and a lot of weak contact. Miley heads into this start with a 2.00 ERA and a 3.35 FIP in his 36 innings of work. It certainly looks as though the reunion with former Brewers pitching coach Derek Johnson is a success this season after a bumpy ride last season.

While Miley’s body of work is very impressive, he is a major regression candidate as well. With a 58.8% GB%, Miley has only allowed 19 hits with a .162 BABIP against. Nothing against Miley, who may just be having a career year, but guys with ground ball rates of that magnitude are never going to post a BABIP that low. Miley’s 83.3% LOB% is also subject to some regression.

We’ve all known about the Coors Field Effect for a very long time. The Rockies are taking it to the extreme this season. In 16 road games, Colorado has only scored 52 runs and is just 2-14. Going into Thursday’s series opener against the Reds, Colorado was 10-9 at home with 108 runs scored in 19 games. The baseball is playing differently, as we all know, but the Rockies seem completely lost on the road and comfortable in their natural surroundings.

Being 10 games out a week and a half before Memorial Day is a demoralizing feeling, though not an unexpected one for the Rockies, who knew that this season would be a challenging one in a lot of ways. Still, the harshness of that home/road dichotomy really stands out in a lot of ways.

Marquez has a career ERA of 5.17 at home and 3.55 on the road, even though his FIP is identical at 3.87. It speaks to how many challenges Coors Field possesses, not just because of the extra carry to the baseball, but also because of the spacious outfield. Coors Field annually has the highest batting average on balls in play of any ballpark.

To me, I think Marquez has a better feel for Coors Field. He allowed eight runs in two-thirds of an inning against the Giants to totally blow up all of his stats on May 4. Otherwise, Marquez has not allowed more than three runs in a start. Miley has regression signs in the profile, even if his ground ball style should be conducive to pitching in Denver. That’s good enough for me to look at the Rockies on Friday.