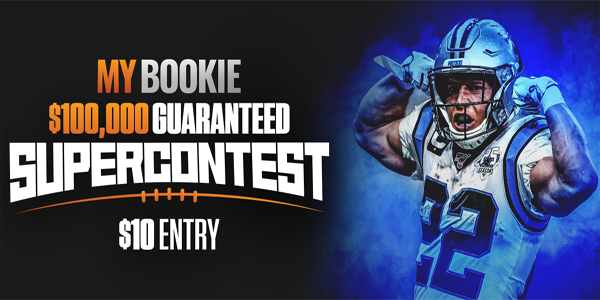 There is still time to enter the MyBookie SuperContest. The NFL season may have started, but there are quarter prizes to give out and you still have a chance at the full-season prize pool if you pick really well and overcome the fact that you missed Week 1.

Regardless of which contest you enter, you have a chance at winning some very nice cash prizes based on your picking ability for the full season or for the four quarters of the season.

You’ll have a smaller margin for error by not signing up prior to Week 1, but those quarterly prizes are very much in play no matter when you sign up.

MyBookie Sportsbook also regularly runs Squares Contests with a $15,000 prize pool. You’ll have to be on the lookout for those as well, as MyBookie runs the Squares Contests for NFL, college football, NBA, and college basketball, which is now scheduled to start on November 24.

If you’ve never played Super Bowl Squares, there isn’t really any skill involved, but everybody has a chance to win. Numbers 0 through 9 are randomly placed across the top row for one team and vertically in the first row for the other team and the intersection of the last digit of the final score is the winner. Those have a $10 entry fee and with 100 squares, that means some big potential prizes.

For football and NBA, the first quarter, second quarter, and third quarter pay 20% of the prize pool. The final score pays 40%.

For college basketball, the first half pays 40% and the second half pays 60%.

These won’t be the only contests running at MyBookie Sportsbook, so be sure to check on them regularly and also give them some consideration if you want to sign up with a new sportsbook. They have a lot of great bonus offers right now and if you sign up through us at BangTheBook, you’ll double your deposit with a bonus and also get a free futures bet.