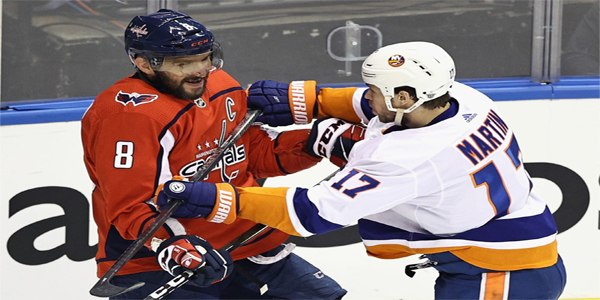 The New York Islanders had a gameplan and they executed it to perfection in Game 1. Now the Washington Capitals will have to figure out how to make adjustments against a head coach that knows them about as well as they know themselves.

Early money has come in on the underdog Islanders for Game 2 of the best-of-seven Eastern Conference series to drive the pup price to +105 at BetDSI Sportsbook. The Capitals are -125 the day before Friday night’s Game 2 in Toronto.

The Islanders and Capitals had a little bit of a feeling-out process in the first period of Game 1, but apparently Barry Trotz saw what he needed to see. His Islanders fell behind 2-0 on a couple of TJ Oshie power play goals and then scored four unanswered to come away with a 4-2 victory. The Islanders were aggressive and they were physical in the series, as Trotz put out a message to make life uncomfortable for guys like Nicklas Backstrom and John Carlson.

It worked. Capitals players called the blatant interference by Anders Lee “predatory”, but Lee will not face any supplemental discipline from the league. Backstrom, however, will miss Game 2. The Capitals spent most of the game trying to exact revenge on Lee and the Islanders instead of worrying about scoring goals. They were clearly thrown off by what transpired and how they had to shuffle the lineup to account for the loss of their star playmaker.

Braden Holtby is really under the microscope in this series. Holtby had a poor regular season and then backup goaltender Ilya Samsonov was deemed unfit to play in the postseason after suffering an injury before the restart. Holtby only stopped 23 of 27 shots. He allowed six goals on 70 shots in the three Round Robin games.

If it was just a blip on the radar coming back from the long layoff, that would be one thing. It isn’t. Holtby had a 3.11 GAA and an .897 SV% during the regular season. His -16.76 goals saved above average mark was far and away the worst of his career. He also struggled during the 2017-18 season to a similar degree, but took over in the playoffs for Philipp Grubauer and backstopped the Capitals to the first Stanley Cup win in franchise history.

The hope is there that Holtby can right the ship based on his career track record and some of his past playoff history, but he better find it soon, otherwise the Capitals are going to find themselves in quite a predicament.

Semyon Varlamov stopped 24 of 26 shots thrown his way, but the Capitals were not their usual offensive selves. They really missed Backstrom and couldn’t find a rhythm. This is a Capitals team that was fifth in 5-v-5 goals in the regular season and 11th in high-danger chances. They looked nothing like that team in Game 1. It stands to reason that Trotz would know what to do against his former employer. It also stands to reason that the Capitals should be better in Game 2. How much better is the question.

Varlamov has been inconsistent throughout his career, but he had one of his better seasons in his first year in an Islanders uniform. He had a 2.62 GAA, his lowest since the 2014-15 season, and a .914 SV%, which was right in line with his career average. The Islanders did not allow a lot of goals this season and he and backup Thomas Greiss were benefactors of the efforts of the guys in front of them.

If the Islanders can limit the chances for Washington again in Game 2, Varlamov won’t have to be superhuman, like we’ve seen other goaltenders have to do in the playoffs already. If the Capitals make the right adjustments and put some additional pressure on Varlamov and the Islanders, it could be a different story.

This is a tough game to bet. The under 5.5 makes sense with Backstrom out and a limited number of shots and scoring chances in Game 1, but it is heavily juiced in the -135 range. The side has moved down a bit, likely with the news that Backstrom won’t play. He is a major cog and facilitator for that Washington attack.

With how poorly Washington played 5-v-5, it is hard to lay a price with them in this spot, so the Islanders are the play for a smaller bet size than normal.

BET THE NEW YORK ISLANDERS IN GAME 2 AT BETDSI!