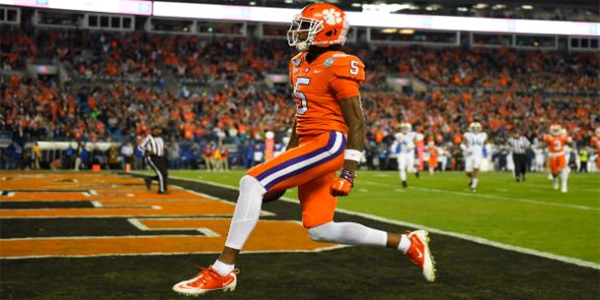 The LSU Tigers have been recognized for their crew of wide receivers who have connected with Heisman Trophy winner Joe Burrow. But you know, those other Tigers – the ones at Clemson – have some guys who can go out and pull down passes with the best of them as well.

Among them is Tee Higgins, who has a chance in this game to break the all-time career record for most touchdown catches at the school. He is currently tied with Sammy Watkins and DeAndre Hopkins, who both played in Sunday’s Kansas City-Houston NFL playoff game.

Higgins fits what Dabo Swinney’s offense wants to do, in that he is a great downfield target for Trevor Lawrence, who may be the best quarterback prospect in the country (with apologies to Joe Burrow, of course).

He caught 56 passes for 1115 yards. That’s a 19.9-yard average, and along with teammate Justyn Ross, he’ll wind up being a first-round NFL draft choice.

But trouble reared its ugly head (pardon the pun) in the Fiesta Bowl a couple of weeks ago. It affected his play in the game and might continue to have an effect.

Here are the odds on two of his receiving props, as they are posted for Monday night’s national championship game:

The game kicks off at 8 PM ET at the Superdome in New Orleans, and BetAnySports not only has a boatload of props you can take advantage of, they also have “reduced juice” to give you a better price on the pointspread, total and money line. Sign up and take advantage of it!

Against Ohio State, Higgins apparently suffered a head-to-head hit after his helmet had gotten knocked off, as he collided with Jeff Okudah of the Buckeyes. This happened on Clemson’s first possession, and he sat things out until the second half. He did not have a major impact when he returned, winding up with four receptions for 33 yards. He was denying a head injury, or the possibility of a concussion, in interviews this week, claiming it was actually his ankle that was injured, and I felt this conflict in stories was kind of strange. At any rate, he has been pronounced “good to go” by Swinney.

The Fiesta Bowl game did not constitute a banner evening for the Clemson receivers in general; between Higgins, Ross and Amari Rodgers, none of them reached the 50-yard mark, and that might scare off some of the team’s potential backers in this game.

Can he reach the threshold that would make the “over” bettors in this prop happy? Well, much is going to depend on who will be responsible for covering him.

Because Higgins looms as Lawrence’s most dangerous outlet (Ross went from a 21.7-yard average to 12.9 this year), we imagine that much of that task will be handled by Derek Stingley Jr., who came to Baton Rouge with much in the way of ballyhoo and has proven to be “all that.”

Stingley, whose grandfather Daryl Stingley was infamously paralyzed by a hit by Jack Tatum of the Oakland Raiders in 1978, got off to a quick start at LSU, as he had graduated early and was able to actually engage in practices with the team for last year’s Fiesta Bowl. It is said that the first time he took the field, he picked off Burrow.

According to head coach Ed Orgeron, Stingley is “one of the best cornerbacks I have seen.” The frosh intercepted six passes and was named a first-team All-American. It sounds as if he already deserves to be placed in the “shutdown” category; worthy of being a first-round draft pick if he were only able to come out (of course, he can’t yet).

He gives us enough confidence that we’ll go UNDER on Higgins’ receiving yards prop, and NO on the TD prop. Clemson can beat LSU, but they’ll probably have to do it with other people.

BetAnySports affords you the opportunity to get better odds with reduced juice, and then, after the game kicks off, you can keep the action going with Sports Betting Ultra…..And of course, there are all the props you could ever hope for… There are plenty of ways to open up an account; use your debit or credit card, person-to-person transfers or the virtual currency of Bitcoin, which is fast and easy with their automated system, and NEVER incurs a transaction fee!