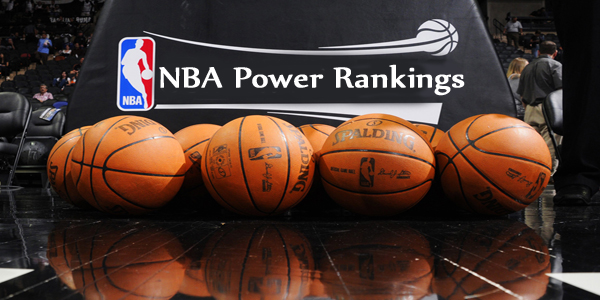 Happy March! Despite all the fuss over teenagers and 20somethings the NBA continues to get better and better. The Lakers and Clippers gave us a taste of what to expect in the Western Conference finals. Giannis is out a few games with a knee sprain. Will the Bucks shut him down for the rest of the regular season? The Heat, Raptors, and the Celtics are preparing for the playoffs and the Pacers & 76ers have about six weeks to get healthy and find an identity if they want to meet their preseason expectations. Meanwhile the Grizzlies are watching their lead for the eighth seed tighten as the Pelicans look terrifying and the Kings, yes, the Sacramento Kings, are playing great basketball. As Kevin Garnett said, “ANYTHING IS POSSIBLE!”, but for now, here’s some data and thoughts on the week to come. Below you’ll find each team’s pace and net ratings (total, home, & away) for the season in total, the last ten games, and then my own ratings. Pace shows us how many possessions are averaged per 48 minutes and net rating shows us the difference in offensive & defensive efficiency for each team. The season totals give a larger sample size, last 10 games a look at current form, and finally are Noops’s Numbers, my own view of things. I take the first 2 sets of data along with other cuts of time, other points of data, and adjustments for opponents faced. Without further ado, here’s my ranking of teams for the upcoming week:

To be clear, these are specifically how I’m ranking teams for the next week. The NBA season is long and always changing so it’s important to make adjustments regularly. This is a reference tool you can use throughout the week to value teams. The arrows help us see which teams are trending above or below their season averages. I look for discrepancies in lines and my rankings. For example, if the Houston Rockets were visiting the Los Angeles Lakers season long data would set the Lakers as favorites, but I would love to take the Rockets in that spot. On to the week ahead:

Everyone, even me, has been talking about the Pelicans and Kings. Will Zion be able to lead New Orleans to even one win in the first round? Can the Kings complete the miracle playoff run to end the longest active playoff drought? Screw all that. The Grizzlies have a four game lead on the final playoff spot and Jaren Jackson Jr. & Branbon Clarke should be back this week. On top of the improving roster, Memphis has been playing good ball after bad five game losing streak which makes the L10 data little murky. The lost to the Kings, Lakers, Clippers, Rockets, and Kings again before beating the Lakers, then going 2-1 on a three game roadie against Atlanta, Brooklyn, and Dallas finishing up the week with a second victory over the Hawks. They are beating the teams they should soundly and losing to some of the league’s best teams and the Kings. I think we have a chance to buy low here. The host Orlando Tuesday and then visit Portland and Utah to finish a short week. I’m going to be looking to bet the Grizzlies in all three games, especially if both Jackson Jr. & Clarke return.

The Raptors have overachieved all season in my opinion and I think things are starting to cool off just a little bit. They’re still winning games, but the margins are shrinking and a loss at home to Charlotte is embarrassing. Some injuries are starting to creep in again and Lowry looks like he’s feeling the 36 minutes a night for 51 games. Toronto is 5-4 in their last nine games after winning almost 75% of their games to start the year. Now could be the time to start fading the Raptors, but they have a bizarre schedule this week. They visit Utah Monday night and then don’t play until Saturday when they host the Pistons. I’m betting on the Jazz Monday night. This is the last game of a five game road trip for Toronto and a back to back so the Jazz have a big rest advantage. Lay the points with Utah Monday. As for Saturday, maybe a Pistons first half bet? I’ve covered the tanking Pistons, but maybe the Raptors are rusty off the long break after a long road trip. Tanking teams tend to play well to start and fade in the second half so look at the first quarter or first half and avoid betting Detroit full game.

My numbers are down on the Celtics, but this is a perfect example of needing to put context around what data is telling you. Their numbers are down and they lost four of their last fives games, but are we sure the Celtics are actually any worse? Looking at their four losses I’m actually not too concerned going forward. They lost overtime games against Houston & Brooklyn and very close games to Utah & OKC. They shot 40% from the field and 31% from 3 in those games despite shooting 46% and 34% respectively for the entire season. I think this stretch was more regression to the mean after an 11-2 run than an indication to be concerned going forward. They visit Indiana then it’s onto Milwaukee where they may miss Giannis with the week ending against Washington & Chicago. I’m not going to be afraid to bet Boston early in the week and selling points at the week’s end could be a great idea.

Did you notice earlier how I missed them when talking about the race for the final playoff spot in the West? I did it twice. They’re five games out now behind three other teams after a 4-10 run. Demar DeRozan is back and that is not a good thing. The Spurs’ net rating improves 3.9 points with Demar off the court. The offense steps back 3.5 points, but defense gets a whopping 7.4 points without him. His younger replacements are much better suited to defend in today’s NBA. If DeRozan continues to get minutes we should look to fade San Antonio. They host Dallas, Denver, and Minnesota this week. I’m ready to bet on Dallas, Denver, and maybe even Minnesota this week. Ok, probably not Minnesota, but we’ll see.

This team is perplexing. At certain points Jokic looks like an MVP candidate and they beat the Bucks in Milwaukee by a dozen. Then, just last Tuesday, they lost by 16 to Golden State at home. It really fries my noodle and the numbers lead me to believe they are more mediocre than they are good. They have a stroke of luck on Monday as they host the Bucks sans Giannis, but then they head on the road where they’ve been downright awful this season. They visit Dallas, San Antonio, and the Lakers. I already mentioned the spot in San Antonio and despite what I just said, they should be able to take care of business. The other two games are great spots to bet against Denver. The game in Dallas is particularly enticing. The Mavericks should be focused on moving up in the seeds to avoid a Los Angeles team and ready to avenge a loss to Denver in Dallas earlier this season. Look to fade the Nuggets against good teams until further notice.

Fade the Pistons. I’ve covered this enough the past few weeks. They stink and they’re only incentivized to stink even worse.

Golden State with Curry is going to be funky. They lost, but were competitive when he played against Toronto and actually beat the 76ers without him. They have the worst record in the league by a few games, so they could win a game or two for the season ticket holders if they want. Be careful here.

San Antonio, Portland, Sacramento, and New Orleans are all competing for the playoffs so there is no tank in sight.

That leaves us Phoenix, Minnesota, Washington, Charlotte, Chicago, New York, Cleveland, and Atlanta. All of these teams for various reasons, good, bad, or otherwise, continue to compete every night. I would actively be trying to lose games if I were these teams. Giving it your best is always admirable, but pride is often foolish. It’s time to extend injury recovery times, test out young players & free agents to see what you’ve got, and maybe do your best to use all your timeouts before the end of the game. I can’t condone blindly fading these teams yet.

Thanks for reading! You can reach me on Twitter @_Noops with any thoughts or questions. Feel free to let me know what I could be doing better or what else you might be interested to know. Have a great week and good luck!