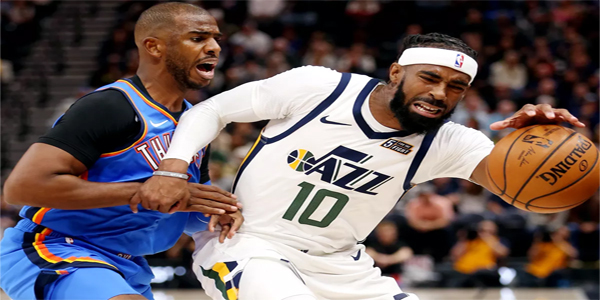 Those BetAnySports patrons who figured the Oklahoma City Thunder were going to be nothing but also-rans after dealing away Russell Westbrook and losing Paul George as well have had to think again. And maybe that’s a lesson to be learned about analyzing and handicapping NBA games.

When you look at the four top scorers on this club, they have Usage figures of 23.2 to 27.2. That is a stark contrast to last season, when Westbrook and Paul George had Usage numbers of 30.9 and 29.5, respectively. In other words, there is more sharing of the scoring responsibility now, although only two teams have had fewer assists.

Chris Paul has come in and steadied things; he has a three-to-one ratio of turnovers to assists and is anchoring a lineup that consists of three guards,. Danilo Galinari, a power forward who shoots 41% from three-point range, and center Steven Adams, a bruiser.

Then there are key subs like Dennis Schroder, who brings high energy into the proceedings and tallies 19 points per game, as well as Nerlens Noel, who is getting a chance to show what he can do up front after being hampered by injuries all too often in his NBA career. On a per-100 possession basis, Noel is averaging 13 rebounds and 3.9 blocks, so perhaps he is functioning in much the same capacity as Serge Ibaka did for this team.

The restart gets underway for them on Saturday against the Utah Jazz. They’ll be laying a single point, with a total of 212 points posted, according to the NBA betting odds posted at BetAnySports.

Now the great news is that Andre Roberson, long known as one of the best defenders in the NBA, is past his knee injuries – which robbed him of a couple of seasons, and is back to do whatever is needed. Roberson returned to the floor in the first scrimmage game and drilled two triples to beat Philadelphia. Everybody went wild.

You can’t say enough about the job Donovan – who won two national titles at Florida – has done. His team is last in the league in offensive rebounding, and we mentioned the dearth of assist. And they do not launch a whole lot of threes either (27th in the league). But they have kept teams off the free throw line and limited turnovers.

And they are mentally tough. How tough?

Well, OKC has come back sixteen times from a fourth quarter deficit to win a game. If they do that three more times, they will set a new NBA record for the shot-clock era.

And they have reversed their fortunes after a rough 6-11 start, going 34-13 since. Their 40-24 straight-up record, tying them for fifth place with Houston in the Western Conference. There won’t be any home court advantages, so seeding won’t matter much where they are. It is worth noting that they also have a 40-24 record against the basketball pointspread, which is the best in the NBA.

While this team has been all about chemistry, Utah’s has come into question. So we don’t mind laying a point with the Thunder. As for the team’s chances through the bubble, we can see them winning more than 3.5 games, but not enough to make it all that attractive at the price of -185.

In terms of the NBA title, they are priced at +8000 at BetAnySports, where you can get more props on the NBA restart than anyone else. Don’t forget about reduced juice, which provides more value, and Sports Betting Prime, which allows you to participate in wagers while contests are in progress….. Make a deposit using your debit card, credit card, person-to-person transfer or the virtual currency of Bitcoin, which is fast and easy with their automated system, and NEVER incurs a transaction fee!