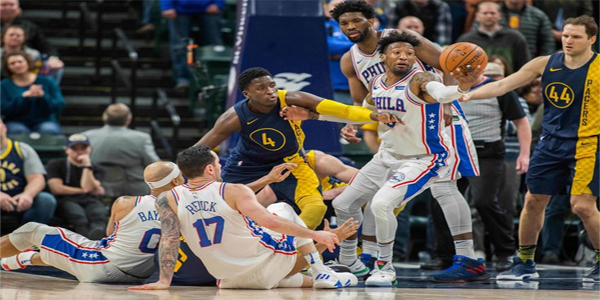 Do you remember once upon a time, when the Philadelphia 76ers, with their dominant center and army of top draft picks, were going to be a force to be reckoned with in the Eastern Conference for years to come? Surely there are plenty of BetAnySports customers who recall that. It really wasn’t long ago.

So when we see that the Sixers, at this point before the restart, have a 39-26 straight-up record (28-33-4 against the spread), it actually may be kind of disappointing.

We don’t know who is to blame. But the head coach usually gets the brunt of it. And so there will be something of a microscope on Brett Brown as we move through the seeding games.

Those games might be important to this squad, if the objective is to move past the first round of playoff action. They are tied with Indiana for fifth place in the East; they wouldn’t mind being fourth or fifth, because that would mean a matchup with Miami or Indiana in the opening round, but Boston would be a more dangerous opponent.

The Sixers are embarking on some bold steps with regard to adjusting their lineup as we get ready to start again. They will see action on Saturday, August 1 with a game against the Pacers (scheduled for 7 PM ET).

Philly is a 5.5-point favorite with a total of 213 points, according to the numbers posted at BetAnySports.

It is kind of unusual to have a 6-10 player as a point guard, but that is what the Sixers have had with Ben Simmons, the former #1 pick out of LSU who is an All-Star, but one that is rather incomplete. He knows how to get into passing lanes and disrupt things a little, as his league lead in steals would indicate. And he can be difficult to deal with when able to drive to the hoop.

But he is no threat with his outside shot; certainly not from three-point range. He has made only two triples in his career, and even though we saw some footage of him doing that in practice in the bubble, we’ll believe it when we see it in game situations.

Opponents who know he can’t burn them from the outside can take more liberties in collapsing on him, and that is what the Sixers don’t really want.

So they are taking Simmons and moving him to forward, where he can continue to make plays but without all the ball-handling responsibility. At the point will be Shake Milton, who has come from the G-League. Milton is more of a pure point guard, but he supplies the ability to stretch the defense out because of his shot. In fact, he is 45% from the arc, and that will present problems for opponents.

It might also give Joel Embiid more room. Embiid has missed some time, but he is as good as any big man in the NBA when healthy. The numbers (23.4 ppg, 11.8 rpg) bear that out.

We’ll see how all this affects Al Horford, who will have to accept a role coming off the bench.

When people like Simmons and Matisse Thybulle are on the floor together, Philadelphia can be a pesky team on defense. As it is, they already limited opponents to fewer three-pointers than any other club and are second in the NBA in Defensive Rebounding Percentage.

They hold a talent edge over Indiana, but what must be taken into account is that they seem to get lost when they are away from home. The Sixers are just 10-24 as a road team this season, and a woeful 9-23-2 against the spread.

In terms of the over-under, we don’t know if they are going to catch fire right away or if they have to get used to the adjustments at first. To ask them to go at least 6-2 in the seeding games might be too much, so we’ll side with the -160 on the “Under 5.5” win total at BetAnySports, where you can get more props on the NBA restart than anyone else. Don’t forget about reduced juice, which provides more value, and Sports Betting Prime, which allows you to participate in wagers while contests are in progress….. Make a deposit using your debit card, credit card, person-to-person transfer or the virtual currency of Bitcoin, which is fast and easy with their automated system, and NEVER incurs a transaction fee!