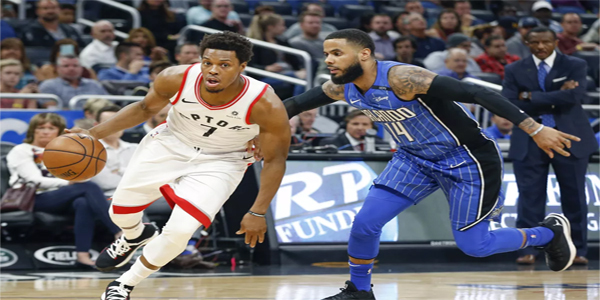 It has been an interesting time for all of the NBA teams while they are in the “bubble,” but perhaps no team has had a more bizarre time of it than the Orlando Magic – if for no other reason than from a geographical standpoint. That’s because they are so close to home, yet so far. The NBA has designated a neutral location at which friends and family members can leave items for players, and maybe that affords some kind of edge for the Magic. On the floor, this is a team that came into the seeding games with the primary objective of securing the seventh-place spot in the Eastern Conference, which enables them to avoid having to endure the two-game “play-in” series, in which, as BetAnySports patrons know, anything can happen.

They accomplished some of that objective in their opener, as they defeated the Brooklyn Nets 128-118 and overtook them for the #7 slot. But their work is hardly done. After a 132-116 win over Sacramento, they fell 120-109 to Indiana on Tuesday, breaking a five-game win streak, and they have fallen back behind the Nets, currently sitting in eighth position with a 32-36 record (33-33-2 ATS).

On top of that, there is no turnaround, as they have to play again on Wednesday night against the defending champion Toronto Raptors.

It’s going to take a lot to bring Orlando around to where it could be a legitimate contender in the East. Steve Clifford has helped them take the first steps. He is a coach who stresses fundamentals, less mistakes, defense, and has had a certain degree of success in the past with Charlotte.

This is a team that is anonymous to most, because they don’t get much of the national spotlight. But it’s a nice little ensemble. Aaron Gordon has a chance to become their best all-around player. That’s because he can get the job done on defense, and can do a little bit of everything on the offensive end, recording 15.4 points and 6.8 assists per game after the All-Star break.

In Wednesday’s game against the Raptors, the Magic are a 6.5-point underdog, with a total of 223.5 points as posted at BetAnySports. Game time is 8:05 PM ET at the Visa Athletic Center, and remember that not only is reduced juice available, but also Sports Betting Prime, which allows for real-time wagering while the action is in progress.

It remains to be seen whether Markelle Fultz is ever going to be the kind of star some thought he might be when he went first in the NBA Draft. he has great athletic ability, and can attack the basket, but he has a limited outside shot. For now, veteran DJ Augustin can provide on-court leadership. No system confounds him, as he’s with his eighth different NBA team. Terrence Ross has been valuable off the bench with 20-point efforts in each of his last two games.

Evan Fournier may not be with the Magic beyond this season, but he is a very dangerous marksman in the here and now, hitting 41o% from three-point range., although he has gone cold in the last two, making just four of 16 from the field. He makes for a nice forward combo with Gordon in a smaller lineup. Orlando has some big people who appear to be able to alter what opponents do in the lane. Mo Bamba is a born shot-blocker, and he has a lot of potential that hasn’t necessarily been fully developed. But he has gotten very few minutes.

There WAS Jonathan Isaac, a jumping jack who needs to bulk up a little more but who’s swatted away 2.4 shots per game. Isaac, as you have probably seen, caused a bit of a stir before the restart opener when he elected to stand for the national anthem, doing so on religious grounds. And then he promptly injured his knee, taking him out of any further action.

Nikola Vucevic, who is in his eighth season with the Magic, has been cruising along with 19.5 points and eleven rebounds a game. He’s a fixture.

But this Orlando squad still isn’t operating at full capacity. Even though the offense seems to be there, Toronto, which beat Miami 107-103 the other day on the strength of Fred VanVleet’s 36 points, is the best defensive club they will have faced. The Raptors have gotten the money all season (37-28-1 against the basketball pointspread) and with the ability to operate inside, they can do that again here.

At BetAnySports, you can get more props on the NBA restart than anyone else. Don’t forget about reduced juice, which provides more value, and Sports Betting Prime, which allows you to participate in wagers while contests are in progress….. Make a deposit using your debit card, credit card, person-to-person transfer or the virtual currency of Bitcoin, which is fast and easy with their automated system, and NEVER incurs a transaction fee!