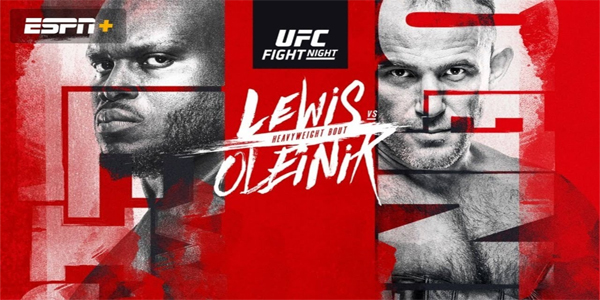 UFC has been one of the betting constants throughout the last few months and we have another fight card this weekend. Derrick Lewis and Alexey Oleinik will meet in the main event of UFC on ESPN+ 32, the last event before the massive main event with Stipe Miocic and Daniel Cormier at UFC 252.

We want to keep the focus on this week’s fight card at the UFC APEX, but it is really, really hard not to look ahead to the end of that trilogy. But, we’ve got betting opportunities to hone in on for this week, so we’ll do that.

We’ll pull our odds from BetOnline Sportsbook this week for this UFC event, but encourage you to shop around for the best prices on the sides and totals on this card.

Action begins in the bantamweight division between Irwin Rivera and Ali Qaisi. This will be the second fight for the -182 favorite Rivera, who lost back on May 16 to Giga Chikadze by unanimous decision. It was very much unanimous, as Chikadze won 30-27 on two cards and 30-26 on another. Rivera, though, who was the champion in Titan FC, is a huge favorite here against Qaisi, a newcomer making his debut after some time with Brave CF. Qaisi hasn’t fought since November and the long odds suggest that this is a good bounce back spot for Rivera.

The biggest favorite on this card is Youssef Zalal, a -465 favorite to improve to 3-0 in UFC and 10-2 overall. Zalal has two unanimous decision wins in 2020 and he’ll be back for what looks to be his third. Peter Barrett was on Dana White’s Contender Series last August and won by unanimous decision with a good performance over Sang Hoon Yoo, but he was just 2-2 in Cage Titans FC prior to that appearance. Zalal is a parlay piece with some of the other fighters on the card, maybe even Rivera.

Gavin Tucker and Justin Jaynes meet in what should be a good bout at 145 pounds. Tucker is the slight -130 favorite with +110 on the takeback for Jaynes. Tucker is 2-1 in his UFC career. He won on July 27, 2019 in his first fight back in 15 months and got quite emotional in his post-fight interview. Tucker is 11-1 in his MMA career, with nine stoppage wins. The 30-year-old Jaynes needed just 41 seconds to beat Frank Camacho back on June 20. Jaynes came out firing with vicious left hands and won his fifth fight in a row and 10th in his last 11. The underdog looks like a really scrappy one here.

Jaynes has five straight first-round stoppages. Tucker has gone into the third round in each of his last three fights. We have to wonder how Jaynes can do as the fight goes along. Jaynes by stoppage or first-round KO and Tucker by decision are options here to increase your profit potential.

Three straight decisions for Andrew Sanchez seem to be having an impact on the total for this right. Wellington Turman is a -156 favorite, but the total is the focal point here juiced to -270 on the over 2.5. Turman is also playing a role there. Four of his last five fights have gone to a decision, including both UFC tries. Sanchez, who dominated Khalil Rountree Jr. in the TUF 23 Finale, only has two wins in his last five fights. Turman’s price might be a little bit light here. Sanchez is probably still living off of his name value. The results haven’t been there.

Nasrat Haqparast is another one of the bigger favorites on the card at -230 as he takes on Alex Munoz. Munoz fought and won in the Dana White Contender Series in the summer of 2018, but did not immediately join the UFC. He will now for this fight against Haqparast, who lost last time out to Drew Dober. That loss snapped a three-fight winning streak for the 24-year-old and it looks like a good time to start a new one, as Munoz is really stepping up in class. He beat Nick Newell in that DWTNCS fight and Newell has not taken the next step since.

Kevin Holland is another big favorite on the card at -450. He’ll take on Joaquin Buckley. This is a very fast turnaround for Buckley, who just beat Jackie Gosh in LFA on July 31. Holland is the far more accomplished fighter and he’s got quite a bit of size on his opponent here as well. Holland is a good parlay piece with Zalal to cut into the juice.

Laureano Staropoli is -135 for this fight against Tim Means as he shakes off a long layoff following just the second loss of his career. Staropoli lost to Muslim Salikhov in decisive fashion, as two judges had the fight 30-26 and one somehow had 29-28 back on October 26. Will he bounce back against Means? Means has lost three of his last five fights, the two most recent ones by stoppage. The 36-year-old is on the backside of his career and Staropoli should be the quicker, more athletic fighter. That should be enough to win at this price.

Beneil Dariush showed a lot in his last fight against Drakkar Klose. Dariush and Klose traded blows for a while before Dariush won via knockout one minute into the second round. It was the fourth straight win and third by stoppage for Dariush. It is entirely possible that he is really starting to show that promise that was expected of him as a prospect.

Scott Holtzman is far from a prospect at 36, but he’s won two straight and four of his last five heading into this fight with Dariush. Holtzman has never been stopped, all three of his losses have been by decision. He also only has two knockouts in the last seven years and only one submission. Dariush has been knocked out three times, but Holtzman isn’t that prodigious of a striker.

Submission expert Julija Stoliarenko will make her UFC return to take on Yana Kunitskaya. Stoliarenko was on the TUF 28 cycle, but lost her semifinal and finale matchups. She went to King of Kings and then got an Invicta FC shot against Lisa Verzosa and won. Now she gets a more official UFC shot and she’ll look to lock in her signature armbar against Kunitskaya.

Kunitskaya goes from fighting Ketlen Vieira to fighting Stoliarenko, which is a big difference, given that the new challenger has such a terrific ground game. The 30-year-old Kunitskaya is a striker through and through. The two never crossed paths and Kunitskaya has had a much more impressive career and a more impressive list of opponents, which is why this price is big. Kunitskaya’s loss to Aspen Ladd was not an impressive effort and she may be ripe for an upset here. We know the underdog can lock in submissions with the best of them.

Darren Stewart returns to UFC after losing to Bartosz Fabinski in his CW 113 fight just as the pandemic was taking hold. Stewart was training to fight Marvin Vettori and then got moved to the CW card because COVID-19 stopped UFC in its tracks. It was a weird spot for Stewart and should probably not be considered at all in the handicap of this fight. Based on the price, it has not been.

Maki Pitolo scored a nice win over Charles Byrd last time out, but the loss to Callan Potter last October still stands out in the minds of most UFC fans. Byrd is a fringe MMA fighter, so a knockout win there wasn’t a big surprise. Potter is on the back side of his career, but his cage IQ and smarts were enough to beat the much younger Pitolo. Potter also showcased a really strong chin in that fight at UFC 243. Stewart isn’t as old as Pitolo, but he also has a great chin and a ton of fight IQ. These look like the types of opponents that Pitolo will struggle with and he gets another here.

Omari Akhmedov is not Dominick Reyes, Jacare Souza, or Yoel Romero, three of the last four guys that Chris Weidman has lost to. He is, however, putting together a nice run in the UFC and looks like a guy that could make some moves in the middleweight division sooner rather than later. He’ll get a chance here against a name opponent in Weidman.

Weidman actually has one win in his last five fights. The chin isn’t what it used to be, as all five have ended in knockouts. The 36-year-old has stared down the best in the division and has had his title wins and defenses, but those days appear to be long gone at this point. Maybe Weidman has refocused during the pandemic and has been able to train more effectively, but Akhmedov is a guy that seems to be getting better. He doesn’t have the striking power of Weidman’s recent opponents, but Weidman isn’t the type that wins decisions. It looks like the slight dog here.

Maybe Alexey Oleinik wants to get to 60 wins. If he gets his 60th career win here, then maybe he’ll call it quits. If he doesn’t, we’ll see. What we do know is that he’s an underdog against Derrick Lewis in this heavyweight scrap. The 43-year-old Oleinik has won his last two fights after getting knocked out in just 12 seconds against Walt Harris.

That is how it goes for Oleinik these days. He wins late or he gets caught early. Lewis by first-round knockout isn’t a bad bet here in this one, as it has happened twice in Oleinik’s last two losses. He went the full 15 with Fabricio Werdum last time out at UFC 249 and won by split decision. That performance was made a little more impressive by what Werdum did to Alexander Gustafsson on July 25, but Gustafsson didn’t seem to be fully invested in the fight.

Lewis has actually gone the distance in each of his last two fights himself, but he fought two guys with big gas tanks. I’m not sure Lewis wants to draw this one out with Oleinik.