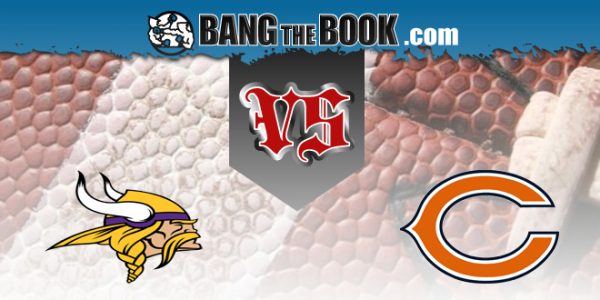 The struggle is real.

If this was baseball, you could say that the Chicago Bears’ offensive attack hasn’t “dented the dish” much. And customers at BetOnline can see this.

Let’s summarize a little. They have gained just 29.7 yards per drive. That’s 29th in the league. They have outscored only the New York Jets on a per-drive basis. They are scoring touchdowns on only 50% of their red zone trips, and only two teams have done worse than that. They have punted 42.6% of the time, so obviously this offense is getting plenty of rest.

Need we really go on?

The only thing that has kept the Bears’ heads above water is that they have played some outstanding defense, or at least good enough to have them at 5-4 straight-up (and against the spread as well). The problem is that there is so little production that things may be catching up to them. They are on a three-game losing streak as they encounter the Minnesota Vikings on Monday Night Football (8:15 PM ET, ESPN) at Soldier Field.

The Vikings are a sexy selection for a lot of people because they have seen Dalvin Cook dazzle defenses as he came into this week leading the league in rushing at 858 yards.

So I guess head coach Matt Nagy had to do something.

And don’t get me wrong; I think he probably did this to get some of the heat off of him. But he has turned over the play-calling duties to Bill Lazor, his offensive coordinator. maybe he’s looking for a scapegoat. Maybe there was a mutiny about to happen. Who knows.

Does something fresh or different get brought to the table here? Hmm, let’s explore it.

At BetOnline, the Vikings are laying points on the road:

And don’t forget that with Odds Booster, you can get greatly-enhanced payouts on pre-selected parlays, every day!

It should be noted that Lazor’s tenure as a coordinator in Miami was checkered; although Ryan Tannehill gives him high praise now, mentioning his “quarterback-friendly system,” it was said that the relationship between the two was tense, as Lazor refused to give him any input into the offense and wouldn’t let him audible. Another factor as to why he was fired by interim coach Dan Campbell in 2015 was that he, in the words of an anonymous source, “refused to establish the running game.’

Well, if that’s the case, he’s come to the right place, because the Bears are running out of running backs. David Montgomery (472 yards) never got out of concussion protocol, and that means the team is left without any available backs who have had a carry for them in the 2020 season. As it is, Chicago has a run play percentage of just 33.7%, the lowest in the NFL, under Lazor’s watch.

But it does appear that Nick Foles trusts him. After all, Lazor was right there – as Foles’ QB coach – in 2013, when the U. of Arizona product threw for 27 TD’s with only two interceptions, setting an NFL record for best ratio (which could be broken this year by Patrick Mahomes).

It is true that Lazor, a former quarterback at Cornell who has big fans and big critics around the league, doesn’t have a lot to work with here.

But sometimes players say things. They can’t help it.

If you recall in preparation for the Sunday night game, we mentioned Lamar Jackson’s complaints about Baltimore’s offense being “predictable.” And indeed they were, in a loss to the Patriots.

What Foles has been saying, in identifying problems within the Chicago offense, is that Nagy has continued to call plays he doesn’t have time to execute. That sounds strange, but maybe it’s true, because we think Nagy might be certifiably nuts. Remember that insane kicker audition he conducted a couple of seasons ago?

The ironic thing here is that Nagy got the Chicago gig in the first place acquiring a “guru” reputation by calling Andy Reid’s offense in Kansas City. And now his play-calling may be the source of the team’s ills. If there is a lot of truth to that, it is quite possible that Foles and Lazor have worked on a way to solve it.

This is no bargain, mind you, but maybe, with no ground game, the NFL prop that has Foles’ passing yardage at over-under 265.5 yards is worth taking a look at. We would caution you, however, that when you are using an RPO-based offense, if you can’t ‘R’ (run) it’s more difficult to ‘P’ (pass).

Small details. IF Foles has time to operate (we hear center Cody Whitehair might be taken off COVID reserve in time to play), the insertion of Lazor, where Minnesota Mike Zimmer doesn’t know exactly what’s coming, could be a good one-off maneuver. Fundamentally you’d have to favor Minnesota, but the +153 money line price on the defensively-stout Bears may be worth exploring.

BetOnline has plenty of props you can enjoy when you bet the NFL games….. Remember that you can also place wagers in real time with live betting, and with Odds Booster you get nice surprises, as you can receive greatly enhanced payouts on pre-selected parlays……… No matter what method you want to use, you can open up an account easily. That includes cryptocurrencies like Bitcoin!

Freerolls and Poker Promotions at BetOnline