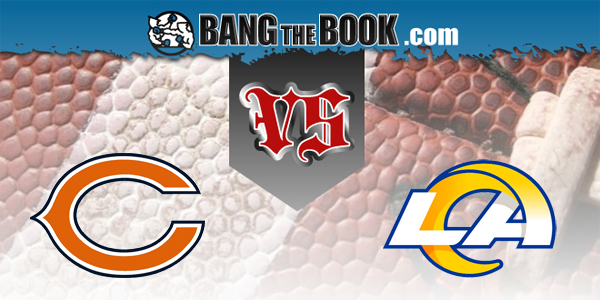 The Chicago Bears are, at this moment, tied for the NFC North lead with a 5-1 record (4-2 against the points). And they can inch ahead of the Green Bay Packers with a victory in ESPN’s Monday Night Football matchup against the Los Angeles Rams. Game time for this encounter is 8:15 PM ET at SoFi Stadium, the Rams’ new palace that is still not accommodating any fans.

And if you are a BetAnySports customer, you can enjoy reduced juice for better odds, and access to Sports Betting Prime, which enables real-time wagering while the contest is in progress.

When you look at this game, you have to consider whether making Nick Foles the starting quarterback has been a real spark for the Bears. It really seems as though while we know what he has been capable of in the past, there is nothing particularly explosive in what he’s been doing.

Foles’ average yards per attempt is negligible at 5.8, and the Bears have not been able to get a lot of mileage even out of their completions, as Foles’ receivers have averaged 3.6 yards after the catch. That is the worst mark in the NFL.

Jimmie Graham has four touchdown receptions, but Allen Robinson is by far the top target (40 catches, 474 yards). But the weapons are few and far between. The injured Tarik Cohen is a notable absence, which is why the Bears were said to be interested in Le’Veon Bell.

In the Monday Night Football odds posted on this game at BetAnySports, the Rams are favored at home:

The best unit on the field in this one is most probably the Chicago defense. They are atop the NFL in a number of different categories, including: completion percentage allowed (57%), touchdowns allowed per drive, TD percentage in the red zone (36.4%). They created a real nightmare for Carolina’s Teddy Bridgewater a couple of weeks ago, picking him off twice, sacking him four times, and limiting him to 16 completions and a 50.4 QB rating.

Over the last couple of seasons the Bears have kept the Rams’ defense very much off-balance, especially QB Jared Goff. In 2018 the Rams came into their game with the Bears averaging 34.9 points a game and were muffled, compiling just 214 yards and intercepting Goff four times. Todd Gurley was held to 28 rushing yards and Chicago won 15-6. Eddie Goldman was a dominant figure in that game, but he’s not available to the Bears because he opted out of the season.

Gurley came back last year and had a strong game, with 133 yards from scrimmage. The Rams were unable to move smoothly through the air again, with Goff going just 11 for 18 for 173 yards. So it is safe to say that Chicago, whether they were working either Vic Fangio or Chuck Pagano’s scheme, has what it takes to upset what coach Sean McVay wants to do, which is to use play action. Goff has thrown off play action on 45% of his pass attempts, so they like to do this extensively.

Let’s not lose sight of the fact that the Rams have done a heck of a job on defense thus far. They’ve only allowed 5.9 yards per pass, and with Jalen Ramsey, they have a shutdown corner. The Rams are fifth best in the NFL in terms of yards allowed per drive. And they have forced their opponents to punt 44% of the time, and that’s best in the league. By the way, Chicago punts on 42.6% of its drives.

I just don’t know if there is any reason to believe that this game is going to produce a lot of points. So the most judicious move would be to go UNDER the total.

BetAnySports gives you a lot of tools to enjoy the NFL with. Access reduced juice and get a better deal on the pointspread, as well as the total, and then after the kickoff, you can keep the action going with Sports Betting Prime…… They make it very convenient for you to open up an account; simply use your debit card or credit card, person-to-person transfers or the virtual currency of Bitcoin, which NEVER incurs a transaction fee!

Deposit with Zelle, Bitcoin, CashApp, or Gift Card & Get An Exclusive Bonus from USDice Sportsbook