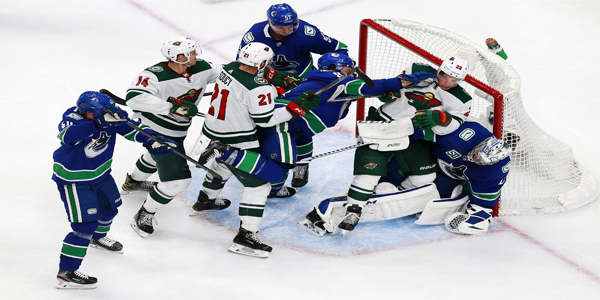 The path back to the playoffs has probably not gone as the Minnesota Wild envisioned. They missed the postseason for the first time in six seasons last year and did so with 83 points in the hardest division in hockey. They actually finished last for the first time since the 2005-06 season.

The Vancouver Canucks probably didn’t expect to get shut out in Game 1 either. Putting Dubnyk on the bench was the right call by Evason, as Stalock outshined Dubynk in their timeshare. There was even some speculation that maybe Minnesota would just plan for the future and give Kaapo Kakhonen the experience.

Stalock did get the start and did get a shutout in Game 1, as the Wild prevailed 3-0. There isn’t any panic for the Canucks as of yet, however, they are lined as an underdog for Game 2 on Tuesday night after closing the favorite at most books for Game 1. BetDSI Sportsbook has Minnesota at -115 and Vancouver at -105 for the all-important swing game on August 4.

A 1-1 series looks a lot different than a 2-0 series, especially because these Qualifying Round matchups are a best-of-five. It was a workmanlike effort for the Wild in Game 1. They scored two goals on the power play and added a third one late on an empty-netter. Jared Spurgeon had two goals and an assist to lead the charge.

The Wild were 2-for-4 on the power play and the Canucks were 0-for-1. Minnesota just played a clean, crisp puck control style by limiting giveaways and controlling the pace and tempo of the game. The Canucks fared well in the dot, but seemed frustrated for much of the game. They’re lucky that Micheal Ferland was not suspended for his spearing incident at the Minnesota bench. He’s just $5,000 lighter in the bank account.

The fact of the matter is that the Canucks were not a great team during the regular season. They just put together more good streaks than bad ones. The Canucks started 9-3-2 to open the season and then had a seven-game winning streak around the holidays. They also had a five-game winning streak in late January. They followed that up with four separate two-game losing streaks.

Streaky teams can have postseason trouble. It is up to Jacob Markstrom to be that stabilizing force. There was a lot more good than bad from Markstrom, whose 11.40 GSAA was much better than Stalock’s and one of the best marks in the Western Conference. He had a .918 SV% and a 2.75 GAA, but Markstrom got offensive support some nights and didn’t on others. For whatever reason, he was much stronger at home than he was on the road. All games are technically on the road now.

Markstrom wasn’t the issue in Game 1, but his position was thought to be the best asset for the Canucks in this series. They’ll still need to generate a whole lot more offense. The Wild had the better scoring chances. The Wild capitalized on their power play opportunities. They were just better in every facet.

With Markstrom and a better look at the Wild and how they’ve transformed their team going from Boudreau to Evason, the Canucks are in a good bounce back spot on Tuesday night. Everything is very strange right now because of coronavirus, but that was the first playoff game for a lot of Canucks players. This is their first playoff appearance as an organization since 2014-15 and just their second in the last seven seasons. This was old hat for most of the Wild players.

Look for Vancouver to get back into the series with a win on Tuesday night.

TAKE THE CANUCKS TO EVEN THE SERIES AT BETDSI!