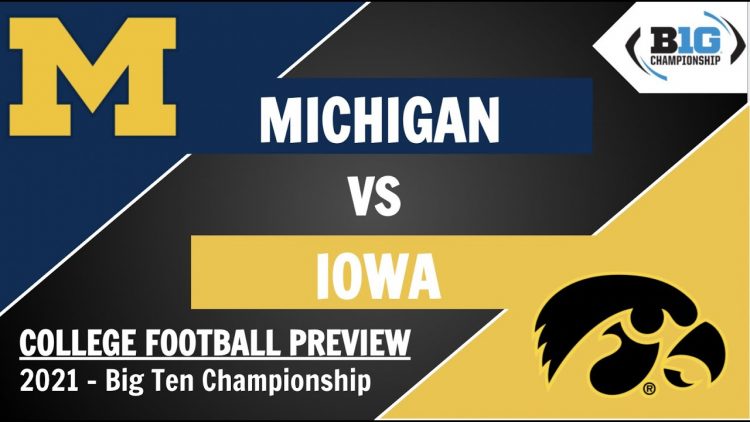 The college football betting action goes on Saturday, December 4, 2021, with the Big Ten Championship Game at Lucas Oil Stadium in Indianapolis, so we bring you the best Michigan vs. Iowa betting pick and odds.

The Wolverines meet the Hawkeyes for the first time since 2019 when Michigan outlasted Iowa 10-3 as a 4-point home favorite. According to MyBookie Sportsbook, the Wolverines are 10.5-point favorites for Saturday’s clash at the neutral site, while the totals are listed at 43.5 points.

The No. 2 Michigan Wolverines improved to 11-1 SU and 10-2 ATS on the season following an impressive 42-27 victory to the Ohio State Buckeyes this past Saturday. Playing as 6.5-point home underdogs, the Wolverines overcame a one-point deficit from halftime and eliminated the Buckeyes from both the playoff race and the Big Ten championship game.

Senior RB Hassan Haskins had a huge game in Week 13. He went off for 28 carries, 169 rushing yards, and a whopping five touchdowns. Junior QB Cade McNamara tossed for 159 yards and an interception, while the Wolverines ran 41 times for 297 yards (7.2 per carry).

Michigan’s run D did a tremendous job against the Buckeyes, holding them to 2.1 yards per rush. The Wolverines lean on their sturdy defense that surrenders only 17.2 points per game (8th in the country) on 122.5 rushing yards (21st) and 196.3 passing yards (23rd).

The Iowa Hawkeyes (10-2; 7-5 ATS) made it to the Big Ten championship game after topping the West Division with a 7-2 record, one game ahead of Minnesota, Wisconsin, and Purdue. They clinched the divisional title last Saturday, outlasting the Nebraska Cornhuskers as 1.5-point road underdogs, 28-21.

The Hawkeyes overcame a 15-point third-quarter deficit at Nebraska. They scored 22 unanswered points, including a safety and Kyler Fisher’s TD punt return, while junior QB Spencer Petras scored the winning touchdown on his own. Petras went 7-of-13 for 102 yards, whilst junior RB Tyler Goodson carried the pigskin 23 times for 156 yards.

Both Michigan and Iowa aim for their first Big Ten Conference title, so we should see a great battle between a couple of top-notch defensive teams. I’m backing the Wolverines to win and cover because they look like a much better offensive team than Iowa. Also, the Wolverines are fighting for the CFB Playoffs, and that’s another massive motive to win this game.

The Hawkeyes’ offense has struggled for most of the season. Iowa averages only 3.3 yards per rush, while Michigan tallies 5.3 yards per carry. The Wolverines’ offense should make the difference, and I hope Michigan will manage to cover a double-digit spread.

The under is 4-1 in Iowa’s last five outings as an underdog, and it is 8-3 in the Hawkeyes’ previous 11 games played on Saturday. Also, four of the last five encounters between the Hawkeyes and Wolverines have gone under the total.

I would ride those betting trends, looking for both teams to put on a strong defensive performance. They should try to run the ball as much as possible, too, trying to control the clock, so give me the under on the totals.