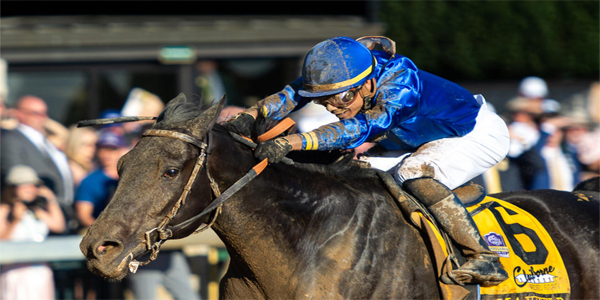 It isn’t a full points race, as only 50 points will go to the winner, but it will still be top race featuring some Triple Crown-caliber three-year-olds in this Grade 3 event. The race is 1 1/16 miles and has 12 entries.

Here are the post positions, horses, trainers, jockeys, and the morning line odds:

The $150,000 purse for the Matt Winn isn’t why Triple Crown hopefuls like Ny Traffic, Maxfield, and Major Fed are listed in this race. It is the Kentucky Derby points. It is the chance to win what is a pretty solid three-year-old event. The $150,000 is fine, but trainers are going to be looking for worthy prep races to put their horses in. Some may also use the 1 1/16 miles here as a springboard to jump into the Belmont Stakes on June 20.

It isn’t a big surprise that Maxfield is the favorite coming off of a win in the Breeders’ Cup Futurity at Keeneland back in November. Maxfield was then sidelined with an ankle injury, but returns here. This race used to be run in June, but the altered calendar pushed it up into May to serve as a prep race and a tune-up for those that want to use it as that.

A lot of the top contenders have drawn outside posts here, which is why Pneumatic from Steve Asmussen draws a short 4/1 price close to the rail. Asmussen has also won this race four times in the past, with his most recent in 2016 with Gun Runner.

Let’s check out the 12 horses and then put together a bet slip:

Mystic Guide (15/1) is actually fairly interesting with the rail post. The son of Ghostzapper is owned by Godolphin and they’ve held on to this colt, which is kind of a sign in and of itself. Mystic Guide won his maiden putting up a 99 Equibase Speed Figure at Fair Grounds back in March. Dam Music Note was a five-time Grade 1 stakes winner, so this is a horse with a strong bloodline that just hasn’t had much of a chance to show it for trainer Michael Stidham.

Mystic Guide was a closer in his 1 1/16 mile race at Fair Grounds and could very well do the same here against some more proven competition. Underneath, he’s not a bad idea, but if Brian Hernandez Jr. has a good enough trip, this colt could be a surprise winner.

Pneumatic (4/1) is getting a lot of buzz in advance of this race. Winchell Thoroughbreds has bred three winners in this race and could have a fourth here with the son of Uncle Mo. He is unbeaten in two tries with a maiden and an allowance at Oaklawn Park. He closed with big speed at one mile in that allowance, but we’ll have to see how the extra 1/8 treats him and rider Ricardo Santana Jr. Santana has been a money rider for Asmussen already this season and will look to be here.

Pneumatic is bred for longer distances, but we haven’t seen it yet. We will on Saturday.

Informative (20/1) is a good story for trainer Uriah St. Lewis with a win two races ago at Aqueduct, but he’s finished seventh, fourth, and second in his stakes career with speed figures that wouldn’t be good enough in this race. That will likely be the case here, especially with how long it took to win a maiden.

Celtic Striker (20/1) is a similar type of story. Manny Franco draws the mount here for trainer Ray Handal. A maiden win at Monmouth Park came over a weak field and the stakes debut at the Gotham in early March did not go well at all. He may be in the way as a pacesetter with a quick burst early, but he’ll fall to the back of the back.

Flap Jack (20/1) falls into the same category as the #3 and #4. A poor result in the Gotham Stakes may be a sign of what to expect here. Flap Jack has had his best performances on the synthetic track. This will be dirt and with some Triple Crown contenders. He won’t be a factor.

Here, he goes from Joe Bravo down at Fair Grounds in March to Paco Lopez. Javier Castellano was in the mount for the Risen Star. The Louisiana Derby was 1 3/16 and the Risen Star was 1 1/18. Now he runs 1 1/16. It was the last little bit that allowed Wells Bayou and Modernist to put some distance into the final numbers. Running at a shorter distance, you kind of have to like his chances, even in a race with good outside speed.

Necker Island (15/1) ran admirably in the Gotham Stakes and then ran well again at Gulfstream on April 25 to finish fourth. He’ll be a horse to watch for wins as the summer progresses on undercards prior to the main event across the country, but he doesn’t, in all likelihood, have enough here unless he can tap into that 99 Equibase speed figure he used to win an allowance in November. Odds are, he doesn’t, but he’ll probably pass some tiring horses.

Crypto Cash (20/1) is an afterthought for Ken McPeek and he seems to like those types of horses, as seen by a horse like Swiss Skydriver on the filly side. He draws popular Churchill rider Corey Lanerie in the mount here. He isn’t going up against Charlatan, as he did in the Arkansas Derby, but he also wasn’t a factor against the second-tier speed in finishing sixth. He won’t be a factor here either.

Shake Some Action (12/1) is yet another compelling three-year-old from Brad Cox. It will be Javier Castellano in the irons here on the son of Into Mischief. The speed figures haven’t really been there to be a factor in this race, but keep him in mind down the line in longer races on undercards. He’s more of an endurance and distance horse than a sprinter it would seem. The workouts have been pretty solid and Castellano was the jockey for Shake Some Action’s only career dirt win. It doesn’t seem like he’ll have enough, but the connections are really good here.

Maxfield (5/2) is so interesting in this race. He was dominant in the Breeders’ Cup Futurity last year. Simply stellar. But, he was hurt and now shakes off the rust to run the Matt Winn Stakes. Jose Ortiz draws the ride and trainer Brendan Walsh feels confident enough to send the prized son of Street Sense back out there. The breeding is excellent and we saw the potential.

The biggest question is what we see here off of the shelf. It has been a long time. Over 6.5 months to be exact. We know he’s good. We know the connections are good. We know Ortiz is a very capable rider and had a masterful trip in the Futurity, where he beat Gouverneur Morris, Enforceable, and Ajaaweed. All of those horses, though, have struggled to some degree since. Obviously Maxfield could win, but it isn’t hard to see a path to skirting the favorite here.

Attachment Rate (4/1) has the gaudy connections, but what about the actual numbers? Trainer Dale Romans has watched the son of Hard Spun hit the board four times in four tries in 2020, including one victory. The speed figures have been big in the Gotham Stakes and the Unbridled Stakes. Has it been the rider? Will John Velazquez be the difference maker for Romans and the connections.

As a stalker, Attachment Rate will be in contention. How is the closing speed? He was bested by Dr. Post in the Unbridled. That is a good horse, but it isn’t Major Fed, Maxfield, or even Ny Traffic in all likelihood. Can Attachment Rate win a sprint to the finish? That seems unlikely.

Major Fed (5/1) has the longest trip and needs to keep from making it longer. In other races, including the Risen Star Stakes and the Louisiana Derby, he has wandered out to the middle of the track to make a tall task even taller. With Joel Rosario back on the mount for a second straight race, improvements seem to have been made during the workouts for Greg Foley’s three-year-old.

He is a closer, but has fallen too far off the pace to close in first. If Major Fed holds the pace and Rosario can push him early in the race to stay on the heels of the leaders, things get very interesting. If he can’t, he’ll finish third or fourth by passing tired competitors. There is moderate risk here, but a high reward if Major Fed can come through.

I cannot get Ny Traffic out of my mind here. The return of Maxfield is the big story, but several other horses have run in pretty good stakes races to this point already and have impressed. If Maxfield comes back no worse for the wear and wins, it won’t be shocking, but I won’t have a ticket on that.

In fact, I’m going to get a little wild with this race because the top contenders are mostly to the outside. Mystic Guide looks like a really good three-year-old. The bloodline is exceptional and the unraced two-year-old is sitting on a lot of untapped potential. A second race at 1 1/16 miles interests me greatly.

Finally, Pneumatic also looks really good. Santana is having a really good year and he definitely has a colt born to run in Pneumatic. His maiden and allowance runs have been great. Even though he doesn’t have the Stakes background of some of the others, he’s still a fun contender to watch.

We’ll keep Maxfield and Major Fed in mind here and use them, almost as a hedge against the higher payouts.