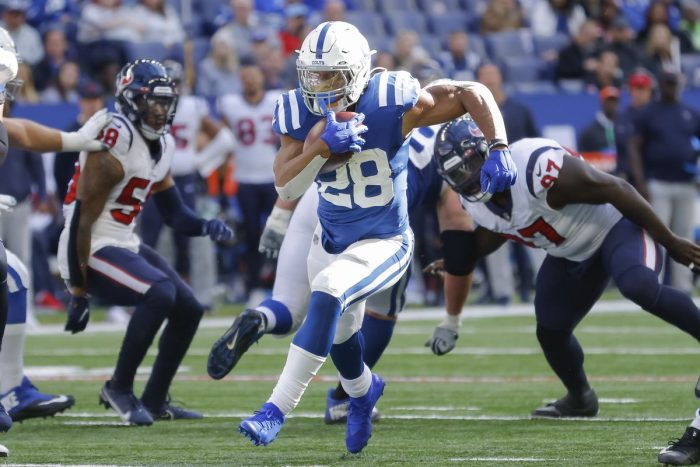 Week 7 Sunday Night Football will see the Indianapolis Colts and San Francisco 49ers lock horns for the first time since 2017. Indy searches for its fifth consecutive victory over San Francisco, so we’re taking a closer look at this interconference showdown to get you the best Colts vs. 49ers betting pick and odds.

The Colts head to Levi’s Stadium as 4-point underdogs on Bookmaker Sportsbook. The Niners are -195 moneyline favorites with a total of 43.0 runs.

Indianapolis trounced Houston to get back on the right track

The Indianapolis Colts (2-4; 4-2 ATS) are coming off a 31-3 home victory to the Houston Texans this past Sunday. It was their second win in the last three outings along with a heart-breaking 31-25 overtime loss at the Baltimore Ravens.

The Colts had an easy job against the hapless Texans. They picked off Davis Mills twice while racking up 174 rushing yards (6.7 per carry). Jonathan Taylor went off for 145 yards and a couple of touchdowns on just 14 carries, whilst Carson Wentz completed 11 of his 20 passing attempts for 223 yards and two scores.

The San Francisco 49ers (2-3; 1-4 ATS) are coming off a bye and will start Jimmy Garoppolo under center. Garoppolo sat out Week 5 and a 17-10 defeat at the Arizona Cardinals, while rookie Trey Lance went 15-of-29 for 192 yards and an interception in his first start.

Lance also had 16 carries for 89 yards, leading the way for the injury-depleted San Francisco backfield. RB JaMycal Hasty will return for Sunday’s clash against the Colts, but Lance won’t be available due to a knee injury. Tackle Trent Williams is doubtful to play which is another problem for the Niners’ offense that already misses TE George Kittle, RB Raheem Mostert, and RB Jeff Wilson.

San Francisco ranks 17th in the league in points scored per game (23.4) and 12th in rushing yards (12th). Garoppolo hasn’t impressed through his four appearances this season, tossing for 925 yards, five touchdowns, and a couple of picks.

This is a big game for both teams, so I’m expecting a hard-fought battle. Hereof, with four points on the table, I have to take the underdogs. I would feel more comfortable with a 7-point spread, so if you’re satisfied with slightly lower wages, buy a few points and go with the Colts.

We should see a back-and-forth battle between a couple of run-heavy teams. I would be surprised if someone wins by a comfortable margin. Four points are a tricky spread, and we all saw what happened with the Colts in Baltimore.

I’ve mentioned the Colts’ defensive stats, and the Niners’ numbers are similar. San Francisco allows 23.8 points on 113.2 rushing yards and 216.6 passing yards. Both teams are capable of playing tough defense and love to run the ball, so we shouldn’t see a firecracker.

On the other hand, the line is set pretty low, and I can see this clash finishing 24-21 or 23-20. The totals look like a tricky wager, and I’ll take the over only because of a possible dramatic finish. The over is 5-1 in the Colts’ last six outings on the road, and it is 4-2 in the Niners’ last six showings at home.