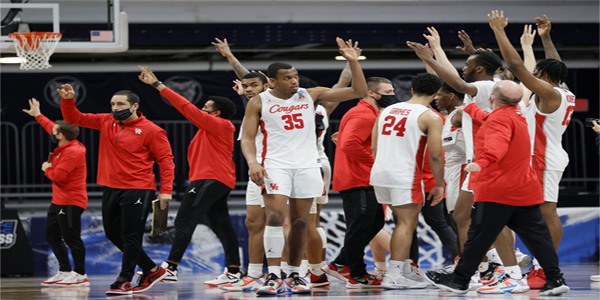 The difference in Monday night’s game between the Houston Cougars and Oregon State Beavers is that while a lot of people suspected that Houston, the #2 seed in the Midwest region, might be in this spot, relatively few thought that Oregon State would get past one round of this NCAA Tournament, much less advance to the Elite Eight.

Yet here they are, and we have an intriguing matchup that is set to get underway at 7:15 PM ET at Lucas Oil Stadium.

And remember that BetAnySports offers you ways to get value, like reduced juice, which offers better odds, and Sports Betting Prime, which enables real-time wagering while the game is in progress.

Whatever sparked the transformation, this is the best this team is playing all season long. We are not so sure they have the kind of marquee talent some of the other remaining teams have, but it is clear that Ethan Thompson is making his case for the all-tournament team.

The 6-5 swingman has made only 27 field goals in this current six-game winning streak. But in these last two games against Oklahoma State and Loyola-Chicago, he has been the main man on offense,with 48 points. And we are going to get back to that in a moment.

We have to admit that Oregon State did not have a banner day shooting the ball against Loyola, as they hit only 41% from the field. The overall offensive numbers haven’t been all that sensational for them. And maybe that is what gives Houston backers the idea that their team can apply a vice grip.

The Cougars are now in the top ten when it comes to defending both two-pointers AND three-pointers, which is unusual, because it presents a real dilemma for opponents who are perplexed about how to attack them. And if you aren’t a dead-eye shooting team, you can’t exploit them.

But all this doesn’t necessarily mean OSU can’t stay in this contest.

Houston is not a dead-eye shooting team themselves. Certainly they put Quentin Grimes on the floor, and he has made 48% of his three-point attempts over his last twelve games. But on an overall basis, they are not the kind of team that is going to be hitting at a high percentage. They look to get offensive rebounds, which they do at a tremendous rate (39.5%). And that helps generate second-chance points.

But 42% of their field goal attempts come from downtown. It was right around that percentage against Syracuse, and they went 7-for-26. So BetAnySports patrons should know that they can be neutralized from that standpoint.

And that is exactly what the Beavers have been doing to people. Over the last six games, OSU has surrendered just 24% from beyond the three-point line. They’ve been pretty consistent in that regard. And these were good teams they went against – UCLA, Oregon and Colorado in the Pac-12 tournament, as well as Tennessee, Oklahoma State and Loyola-Chicago in the Big Dance.

So they are fully equipped to keep Houston’s three-point shooters under control.

Houston coach Kelvin Sampson’s strategy was to shut down Syracuse’s hottest shooter and let someone else beat him. As a result, Buddy Boeheim made just one out of nine three-point attempts in the Orange’s 46-point effort.

We absolutely concede that Thompson is going to be the focus of Houston’s defensive efforts. But it is critical to point out that Thompson did the most damage in these last two games not from the field but from the free throw line, where he hit 23 of 24 shots.

Because of OSU’s defensive emergence, we are not expecting Houston to pick up and run away with this one, so the Beavers offer some value plus the points. But the better play here might be the UNDER, since neither team “minds the grind” and both figure to be low-octane.

Remember that with BetAnySports you can get reduced juice on these NCAA Tournament games, all the way through the Final Four……. And with Sports Betting Prime, you can make real-time wagers while the game is in progress….. Make your deposits with a debit card, credit card, person-to-person transfer or the virtual currency of Bitcoin, which is fast and easy with their automated system, and NEVER incurs a transaction fee!

NCAA Tournament Picks — Who wins the matchup battle between Arkansas and Baylor?