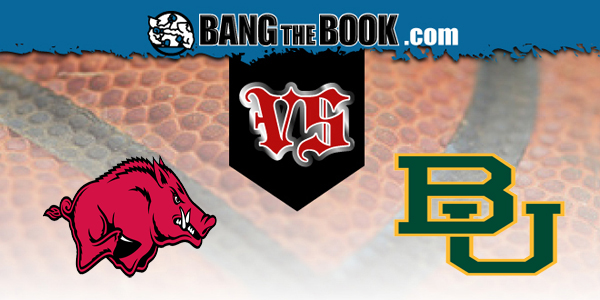 A lot of brackets have probably been in shambles since the first day of the NCAA Tournament, but a lot of amateur bracketologists probably wound up with this Arkansas vs. Baylor game as the Elite Eight matchup in the South Region. Ohio State seemed like an underwhelming #2 seed and there weren’t a lot of challengers in the upper half of the bracket for Baylor.

Villanova was likely the closest, but the absence of Collin Gillespie did wind up playing a role in the bad second half the Wildcats had against Baylor. The Razorbacks survived a Max Abmas three-point attempt at the buzzer to take the glass slipper off of Oral Roberts and leave it shattered in pieces on the court at Bankers Life Fieldhouse.

That brings us to this Elite Eight tilt between Arkansas and Baylor, as the higher seed is -7.5 at Bookmaker Sportsbook with a total of 149.

Arkansas has gotten to this point, but it has not been pretty. At all. The Razorbacks struggled through the first 30 minutes against #14 Colgate before pulling away, leaving the upset bid in the dust. A two-point win over Texas Tech preceded a two-point win over Oral Roberts in games where the Razorbacks were 5-of-26 from three-point range. This is not a team that shoots a ton of threes, but it wasn’t even part of the game plan against ORU.

Arkansas was 1-of-9 from three, but also just 28-of-68 on two-point shots. The game was played to 73 possessions and both teams took pretty good care of the basketball, but the 72-70 final never even sniffed the total in the upper 150s. If the Abmas attempt was an inch to the right, we’d be talking about Oral Roberts in this game against Baylor.

It wasn’t, so we’re not, but Arkansas needs to play a hell of a lot better offensively to be a factor in this game. The Razorbacks had 1.091 PPP for the game when they overwhelmed Colgate in the second half, but only have 1.003 and .958 PPP in the two games since. Frankly, this illustrates what we saw from Arkansas most of the season. This is a team that plays fast and hides some shooting shortcomings with offensive rebounds and a low turnover rate.

The Razorbacks are outside the top 100 in 2P% offense and outside the top 180 from beyond the arc. As mentioned, they don’t really shoot a lot of threes, but that game plan might have to change against a Baylor team that is big, long, and protects the rim pretty well with the 83rd-ranked Block%.

Baylor’s defense did take a tumble late in the regular season, but has bounced back nicely here. Arkansas will have to crack the code and get some high-percentage looks in hope of keeping pace.

Baylor is able to wear teams down with a lot of extra possessions. The Bears are a top-10 offensive rebounding team and a top-five squad in forcing turnovers. Their TO% is 24.8%, so nearly a quarter of opponents’ possessions have ended in a giveaway. Arkansas only turned it over on 17% of its possessions, but the SEC teams don’t really force turnovers to the same degree that Baylor does.

Everybody raves about the Arkansas offense because of the lofty point totals, but the reality is that Baylor is a far more efficient offensive unit. The Bears are second in the nation in 3P% and just outside the top 40 in 2P%. This is a team, much like Arkansas, with a lot of different scoring threats. If one player is off, somebody else can pick up the slack. There are a lot of teams that don’t have that luxury. Baylor does.

This may not matter because this is likely Scott Drew’s best team ever in Waco, but the Bears have not made the Final Four since 1950. This is the first trip past the Sweet 16 since 2012. Baylor lost 82-70 to #1 Kentucky that year. This year, they are the #1 seed. Making good NCAA Tournament runs has not been that hard, but getting over this hump has been. Drew is 0-2 in the Elite Eight and had been having issues in the Sweet 16 prior to this season as well.

However, twice Baylor faced #1 seeds in Duke in 2010 and Kentucky in 2012. Arkansas is not the #1 seed and is a team that does have some flaws. Flaws that have been exposed for wins that have been too close for comfort in March Madness.

Will Eric Musselman and the Razorbacks look to speed up this game? Baylor’s win over Villanova was just 57 possessions and the Wisconsin game was also slow. Do the Razorbacks prefer to get into a shootout with Baylor’s efficient offense? It could very well be their best shot. Will Baylor oblige and run with Arkansas?

I’m not sure how this game falls from a totals standpoint, but I do like Baylor minus the points. Unlike the other Elite Eight game on Monday with a line in this range, this game should be played to a higher number of possessions, which gives the better team more opportunities to produce margin.

The better team here is Baylor. We’ve seen that with the body of work for each team in this tournament and we can see that in all of the stats and metrics as well.