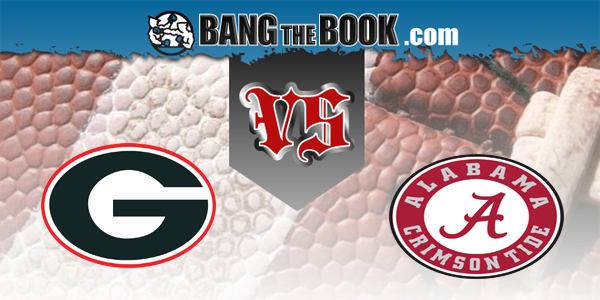 College Football Picks — With or Without Saban, Alabama Faces Stiff Challenge vs. Georgia

If you listen to a lot of the speculation, the Alabama Crimson Tide and Georgia Bulldogs might join the Clemson Tigers in the four-team college football playoff, regardless of the result of Saturday’s game between them. These two programs have mat in an SEC title game and national title game in recent years, but they have not met in the regular season since 2015. Alabama has notoriously gotten a break from SEC schedule-makers, so they’ve usually been able to avoid the big boys outside of their own division.

There is no question that the loser here will have their work cut out for them. They go at it in Tuscaloosa at 8 PM ET.

Alabama is ranked second in the nation by the Associated Press. Georgia is third. And the wild card here is the status of Nick Saban, who tested positive for the coronavirus this week and needs three negative tests, spaced appropriately, in order to patrol the sidelines this week. We don’t have confirmation of anything as of this writing.

You have undoubtedly heard a lot about Nick Saban’s continued success when going up against his former assistant coaches. He is now 21-0 after beating Lane Kiffin and Ole Miss last week. But that did not come without some struggle on the defensive end. they gave up 647 yards and 31 first downs, with 4.7 yards a rushing attempt, and those just aren’t the kind of numbers anyone is used to seeing against them, unless it’s against a top-level foe.

Thankfully for them, they were facing an Ole Miss team that, while rather artful on the scoring end with Kiffin, doesn’t play defense. So they were able to play a little “pinball” with 723 yards, 7.8 yards a carry and 63 points.

I would doubt they’re going to play pinball this week.

No team in the country this season has held its opponents to fewer yards per play than Georgia (3.5). And they played against three teams from the SEC (Arkansas, Auburn, Tennessee) who will probably wind up in some kind of bowl game.

Being able to throttle Auburn, holding the War Eagle to just 216 yards and a couple of field goals, got the attention of a lot of people, although that result probably meant more then than it does now.

We don’t know if we can say that this is Alabama’s best offense. But this will be a test of it. Mac Jones is setting the world on fire right now; he is completing 80% of his passes and is averaging 13.3 yards per attempt. That’s pretty crazy. He has put the ball in the air just 83 times and has thrown eight touchdowns. In the early going, ‘Bama is averaging 560 yards a contest.

Jones is a guy who can take this team downfield; last year, for instance, he averaged over 18 yards an attempt when throwing the ball more than ten yards beyond the line of scrimmage. This year he is 72% with 21 yards an attempt. And when you expand that to the 20 yards-plus category, the average is 37 yards an attempt . That’s not only phenomenal. It is the characteristic that forces the defense to construct their game plan completely differently.

Yet Alabama has found time to run the ball, doing it 52% of the time. And that’s important. Of course, when you have Najee Harris, you’ll be okay doing that. He’s averaging 3.6 yards per attempt after contact and had 206 yards vs. Ole Miss. Georgia gives up 1.5 yards per rush. So it’s a battle.

I think the bottom line in this contest is that Georgia, which was dominated by the LSU offense last year, may not be in a position to trade. And trade is what they may have to do.

Yes, they have glittering defensive stats, and that includes an opponents’ 28% on third down. But the attacks they have faced are pedestrian compared to the one Alabama offers. The challenge the Tide presents is that they will make you cover the whole field. Georgia will have to have those safeties ready to cover deep, because Jones’ performance has been out of this world in that respect, and it’s so unusual that it counts for an awful lot here. But then, up the gut or to the outside, Harris can burn you too.

Georgia QB Stetson Bennett, who surprisingly won the job in fall practice, is a capable game manager but maybe not a dynamic passer yet. And the Bulldogs don’t have the kind of running game that bruises opponents, as they have almost constantly had in the recent past.

We appreciate everything Kirby Smart can do, and he has scared Saban in the past, but he had better offensive weapons in those games. A lot of defenses are great, but Alabama has the ability to make enough big plays that they are going to be one score (at least) better in the end. BAMA

College football betting is amazing at BetAnySports, where you can get closer to profitability with reduced juice, for better odds, and experience real-time wagering with Sports Betting Prime……. Get started by using your debit or credit card, person-to-person transfers or the virtual currency of Bitcoin, which is fast and easy with their automated system and NEVER incurs a transaction fee!