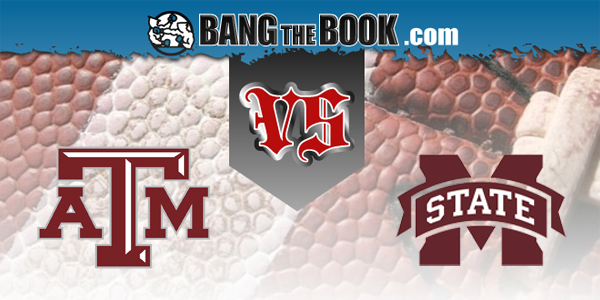 There’s been quite a Jekyll-and-Hyde story going on with the Mississippi State Bulldogs, who vaporized LSU in their opener behind a 623-yard Air Raid, then seemed to lie down and roll over against Arkansas and Kentucky.

Meanwhile, the Texas A&M Aggies are just coming off the best win in Jimbo Fisher’s tenure, as they scored an upset over Florida (an old Fisher nemesis) last week. So is it onward and upward for the Ags? We’ll find out at Scott Field in Starkville on Saturday afternoon.

How quickly can things turn around in college football? Well, in the season opener, Stanford transfer KJ Costello threw for 623 yards against the defending national champions of LSU as Mississippi State rolled. Then, just as people were wondering whether Mike Leach’s Air Raid was going to take the SEC by storm, Costello has thrown for 4.8 yards an attempt with seven interceptions as his team has been embarrassed twice in a row. This last one was particularly shameful, as the Bulldogs managed only a safety at Lexington against Kentucky. That was the first time in Leach’s head coaching career in which his offense could not score any points.

After the game, there was a lot of talk from Leach about how heads were going to roll, and he had indeed pulled Costello (who had been given some Heisman mention briefly, out of the LSU win) out of the game against Kentucky in favor of freshman Will Rogers.

Costello was put back in later and has been “reinstated.” That’s probably a good thing, since other options don’t give them much of a chance. Leach is kind of lucky that defense isn’t exactly the Aggies’ strong suit; for example, they are allowing 10.2 yards per passing attempt, which is 127th in the nation.

However, BetAnySports patrons have seen them already play a couple of the best in Alabama and Florida, so the sampling perhaps is perhaps skewed a little But there may be a bigger intangible” factor – A&M and Jimbo Fisher have to overcome the proverbial “letdown” situation after beating the top-five Gators last week, and that isn’t always easy to do. Yes, he has the better team on the field. Yes, that team scored TD’s after all three MSU turnovers in last week’s meeting. And yes, perhaps Mississippi State’s romp over LSU was more of a reflection on the Bayou Bengals than anything else.

Kellen Mond, who threw for 338 yards last week, is at least an even match against Costello, and even though he hasn’t been the most consistent guy, he is not as combustible as his counterpart, apparently. These Aggies have already faced much better in the persons of Alabama’s Mac Jones (rated #1 nationally in QB rating) and future NFLer Kyle Trask, who has a nifty 14-1 QB-INT ratio.

Here might be one of your classic situations where you have one team that might be overvalued based on a carry-over form its big win last week, and another that is undervalued after a pair of ugly efforts. So does it make sense to “buy low” with the Bulldogs?

Ultimately we’d need more of a reason than A&M falling flat to endorse Leach’s squad, which seemed a lot less dangerous once SEC rivals got a look at them on tape. Maybe he’s not wrong, in that some of the players don’t belong in the program. After all, he did not recruit them into the Air Raid, for the most part.

But maybe there’s an argument for the underdog.

One of things that made the A&M offense click last week was the connection between Mond and wide receiver Caleb Chapman, who had 151 yards and a pair of touchdowns. In the process, however, he injured his knee and is out for the year.

What hasn’t been noticed is the MSU defense, which is not crumbling but in fact has limited opponents to just four yards a play.

And it is one thing to be going through a week where you are congratulating yourself on beating a top-five team. It’s quite another when you have to prepare for an offensive scheme you have not seen, with a stop unit that may not be equal to the task. Hey – throwing for 623 yards against ANYBODY is a big thing.

if you really do believe in the whole “buy low, sell high” thing, then this would be the time to act. We’ll go with MISSISSIPPI STATE as the home dog.

College football betting is an absolute blast at BetAnySports, where you can leap into the stratosphere with reduced juice, for better odds, and experience the “software of tomorrow” today with Sports Betting Prime, which enables real-time wagering……. Get started by using your debit or credit card, person-to-person transfers or the virtual currency of Bitcoin, which is fast and easy with their automated system and NEVER incurs a transaction fee!

College Football Picks — With or Without Saban, Alabama Faces Stiff Challenge vs. Georgia