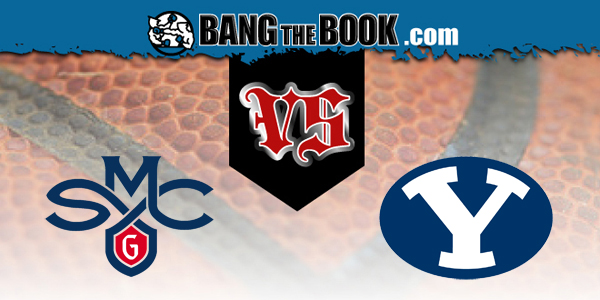 West Coast Conference action for Thursday night should be pretty interesting, since it involves two rather deliberate teams. And they usually provide some drama. It’s the late show (11 PM ET ) as the Saint Mary’s Gaels versus the BYU Cougars at the University Credit Union Pavilion in Moraga, CA.

Tune in on ESPN2.

This has been a closely-contested series of late; last season they played three times. One of those games (taking place in Moraga) went to overtime.The others were decided by two points and one point. And there are no secrets as to how Randy Bennett has built a successful program with the Gaels in the 20 years he’s been there.

One of the things you can always expect with Saint Mary’s is that they take their sweet time on the offensive end. To put it in perspective, there are 357 Division I teams. SMC is 343rd in terms of the average length of time they take on their possessions. And unlike some other teams, they aren’t just working it around to kick out for a three-point shot. They take less than 32% of their total attempts from there.

This is, in fact, a team that does its best work on the inside, if the numbers tell us any kind of story. They are sixth in the nation in Offensive Rebounding Percentage. And they are in the top twenty in defending two-point shots. The anchor of the defense inside the arc is Matthias Tass, an Estonian who, at 6-10, is a solid 57% shooter from two-point range, and has pulled down three offensive rebounds in each of the last three games.

But Mass may have more than met his match in BYU’s 7-3 Matt Haarms, a transfer from Purdue whose value may not necessarily come from blocking shots, but in altering what teams do when they want to approach the paint.

Saint Mary’s has been turned away with prejudice when encountered by the higher-level teams. Memphis held them to one three-pointer in 18 attempts. San Diego State shot 65% from two-point range, 23 points above what SMC has been used to. Both of those games resulted in double-digit losses.

BYU had some rough going early; they really took it on the chin in losing 79-53 to USC. But you know, they have also scored some wins over pretty decent teams like St.John’s, Utah State, Utah and San Diego State. Some of those other victims are about as good or better than this Saint Mary’s crew.

And of course, they laced ’em up against the best in the nation last time out, losing 86-69 to Gonzaga. In this dominant season for the ‘Zags, it’s probably a noticeable feat to stay within 20 points. And BYU might have made things more competitive had they been able to do better than four-of-16 from beyond the arc.

Or if guard Alex Borcello (the Arizona transfer) had been able to avoid his career-high six turnovers. He’ll do better; Borcello leads the balanced BYU lineup with six efforts of at least 20 points this season.

Should we use the term “battle-tested”? Maybe that applies to this BYU squad. And after having to sit out two weeks before the Gonzaga game, they’ll have shaken any rust they may have had.

This game could really move along at the speed of sludge. But we’re careful about going with a totals play, given the possibility that we might see an extra period. But we want to be on the side of taking points (or rather point) here.