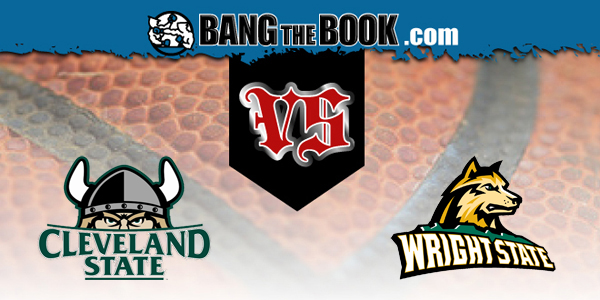 We’ve got a spotlight game from the Horizon League on Friday night. That’s right. The Horizon League. Let everybody else try to milk value out of the marquee games of the night with the most recognizable teams on the board. Not us here at BangTheBook. We’re going to be looking at something completely different.

That is the game between Cleveland State and Wright State. You don’t often see many cases in which a team is a nine-point underdog while being undefeated in conference play straight up and against the spread, but isn’t that a pretty telling sign?

It is indeed Cleveland State that is +9 at BetOnline Sportsbook with a total of 135.5 against the Wright State Raiders. Let’s break this one down.

Cleveland State and head coach Dennis Gates deserve full marks for how this season has gone thus far. Last year’s Vikings team was just 11-21 overall and just 7-11 in a very weak Horizon League. The Vikings had one of the nation’s 20 worst offenses and they were among the worst teams in the country at taking care of the basketball, shooting threes, and rebounding on the defensive end.

The defensive rebounding hasn’t really improved, as Cleveland State’s 34.2% DRB% ranks 319th in the nation, but they’ve been a much better team on the offensive end of the floor. After posting a 44.5% eFG% on offense last season that ranked 347th in the nation, the Vikings are at 49.5% this season. That is still below the midpoint nationally, but ranking 185th in that department is preferable to ranking 347th.

Improvement in all areas has been a major key for the Vikings. They have gone from 248th in adjusted defensive efficiency to 110th. Of course there are a lot of asterisks that can be placed on this season, given the disparities in games played by teams, but the fact of the matter is that the Vikings are improved in a lot of key areas.

Since a thoroughly embarrassing 101-46 loss to Ohio in the second game of the season, the Vikings have a 67-61 loss to Ohio State and then eight straight wins in conference play, including a sweep of Northern Kentucky. That sweep definitely opened up some eyes, especially with the team’s resilience in the Saturday game that went to overtime.

Opponents are only shooting 30% from 3 against the Vikes to this point. Of course, they’ve also played the 170th-ranked schedule and all four teams they’ve beaten in conference play rank in the 230s or lower per Bart Torvik.

Wright State does not. The team that calls the Nutter Center home in Dayton, Ohio is a top-100 bunch per Torvik. This will be an enormous step up in class for the Vikings. Wright State is top-10 nationally in eFG% on defense. For a Cleveland State team that struggles to score as it is, that is a very tough assignment. The Raiders have an eFG% against of 42.9%.

That is a byproduct of holding opponents to 28.4% from 3 and 43.1% from 2. It is worth pointing out that Wright State has played the 239th schedule in the nation per Bart Torvik. One area of weakness for the Raiders is that they have not forced many turnovers, but they play a great base defense and they don’t allow teams to shoot the ball with much efficiency.

As we get deeper into the season, Wright State’s defensive numbers may fall off a bit, but the Horizon League is a really poor conference and there are not many teams that can force regression in those numbers. There just aren’t enough good shooting teams. Wright State did lose to Oakland and Youngstown State, neither of which has been lighting it up offensively.

There is one big key to this game for Wright State. The Raiders are top 40 in ORB%. They are perennially a good offensive rebounding team. That is one of Cleveland State’s huge weaknesses. How many extra possessions and extra opportunities does that mean for the Raiders? That will be something to follow in this game and tomorrow’s game as well with the Horizon League playing those back-to-back sets.

Wright State’s conference performances have been uninspiring to a degree, which is something to be concerned about, but the conference’s best team is expected to get a test from Cleveland State here. I have to think that they’re ready to answer that challenge and expose a Cleveland State team that has a little bit of an inflated perception with that gaudy record.