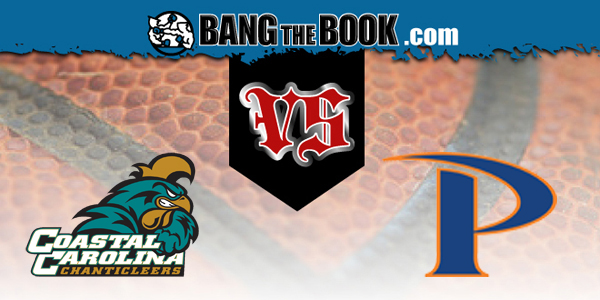 A champion will be crowned tonight in the CBI down in Daytona Beach, Florida. Only three college basketball teams get to end their seasons with a victory and the Coastal Carolina Chanticleers and the Pepperdine Waves are hopeful to be one of those teams.

Pepperdine is -5 with a total of 154.5 that has been bet down at BetOnline Sportsbook as oddsmakers put up numbers following last night’s semifinal games. We’ll break it all down for you and have a pick for the game after getting both overs right in the CBI last night.

We got fortunate with the over in the Stetson/Coastal Carolina game last night as overtime was needed to decide the outcome and 31 points were scored in the extra five-minute period. We’ll certainly take it, though. Coastal Carolina will take it as well, as their 77-72 win propelled them to the CBI Championship Game tonight at the Ocean Center.

The Chants withstood a terrible performance from beyond the arc and an even more discouraging performance at the free throw line to fight on another day. Coastal was 17-of-32 at the charity stripe last night and 4-of-16 from three in the victory. You certainly have to wonder about Coastal Carolina playing a third game in three days here with that overtime game last night, especially for a team that hadn’t played for more than two weeks after losing to Appalachian State in the Sun Belt Conference Tournament.

The offense has some turnover issues and really doesn’t shoot all that well, but last night’s ugly free throw performance was an outlier. For the season, the Chanticleers are a 73.6% team at the line, but that was far from the case in last night’s matchup.

Coastal Carolina has played the 333rd-ranked schedule per Bart Torvik. The Chanticleers have two wins over teams better than a Quadrant 4 game. Pepperdine on a neutral classifies as a Quadrant 2 game for the Chants. So did the first-round win over Bryant.

Pepperdine showed a lot in last night’s come-from-behind win over Bellarmine. The Knights could only win this tournament because of their ineligibility for the NIT or NCAA Tournament as a transitioning member to Division I. They wanted this one and looked good early with a nine-point lead at the intermission, but the Waves held the Knights to just 21 points in the second half and Pepperdine even covered all numbers as the favorite.

The Waves took the lead with 11:05 left in the second half and then sated the game away. There was nothing overly special about the performance except that Pepperdine was 16-of-20 at the rim and Bellarmine was 11-of-26. The Waves were able to get inside and get a lot of high-percentage shots, but so were the Knights. One team was just a lot more efficient at making them.

Two-point defense is Pepperdine’s most notable shortcoming. The Waves have let opponents score on 54.7% of their two-point shots. Distance shooting is another story. Opponents have only canned 28.5% of their triple tries from beyond the arc. Coastal Carolina is a team that likes to shoot a good number of threes, though they have relaxed that pace in the latter portion of the season.

The Waves are a 52% team inside the arc and just a 32.8% team outside of it. Just under 47% of shots taken against Coastal Carolina have been threes this season. Part of that has to do with the Sun Belt Conference, but a big part of it has to do with Coastal actively looking to keep teams out of the paint and force them into taking threes. It will be interesting to see if Pepperdine can get inside and can keep knocking down a large number of those midrange jumpers.

Both teams will probably be a little bit tight in this one. You can question motivation all you want in the non-NCAA Tournament postseason events, but teams are sufficiently motivated to cut the nets and bring back some hardware when they’ve come this far.

Under money is anything but surprising in a championship game. These are two teams that like to push the pace but things do tighten up in games with high stakes. It is almost an auto bet to play the under in any championship game in college basketball, whether that is a conference tournament or a postseason one.

I do like the under here, but I also like Coastal Carolina +5. Coastal is a better free throw shooting team than what we saw last night. They’re also likely to push Pepperdine into taking a higher number of threes than they would like. Even if the Chanticleers don’t win, I would hope that keeps the game close.