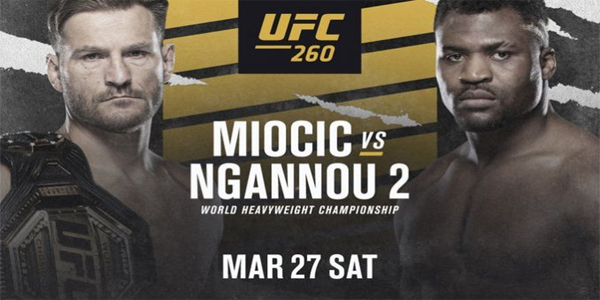 Ten fights are on the docket for UFC 260, but none are as big literally or figuratively as the main event between Stipe Miocic and Francis Ngannou. The UFC Heavyweight Championship will be on the line in a rematch from UFC 220 when Miocic beat Ngannou by decision for his third consecutive title defense.

The card took a major hit when the Alexander Volkanovski vs. Brian Ortega fight was taken off the board because Volkanovski tested positive for COVID-19, but this is certainly a better card than what we’ve seen the last few weeks, including the return of Sean O’Malley from the ankle injury he suffered on the last card with Stipe vs. Daniel Cormier at UFC 252.

Odds have been posted for the main event for a while and for the rest of the card for a bit, so we’ll survey those from BetOnline Sportsbook and see where the value lies for this weekend’s action.

This is a good week to take advantage of the 5% Bitcoin Boost from BetOnline Sportsbook to add to your deposit.

Abu Azaitar is not getting much love from the betting markets as he kicks off this UFC card against Marc-Andre Barriault. Azaitar won his UFC debut all the way back on July 22, 2018 over Vitor Miranda. The 35-year-old hasn’t been seen since. He is 14-2-1 in his career, but we’re approaching a three-year hiatus here.

Barriault badly needs a win. He managed to stay on contract, but he’s 0-3 in the UFC with a no contest after his fight against Oskar Piechota was deemed a No Contest. Barriault won, but tested positive for ostarine. An investigation led to a reduced suspension, but the black mark remained on his record. He’s back now and desperate for a win. With Azaitar’s long layoff, he should get it, but we’ll see.

This fight is a mouthful between Modestas Bukauskas and Michal Oleksiejczuk. Bukauskas has the size advantage in this light heavyweight scrap, but he is just 1-1 in his UFC career with an impressive win over Andreas Michailidis in his debut fight and then a loss to Jimmy Crute in his second crack three months later. The Lithuanian fighter is 11-3 in his career and 13 of 14 fights have been finishes.

Oleksiejczuk also has a loss to Crute to his name. That came back on February 22 in his most recent fight. He’s actually dropped two in a row, both by submission. Bukauskas isn’t a big takedown guy, which could explain why this line sits where it does with Oleksiejczuk such a big favorite. Rather than gamble on a fighter here, I like the under 2.5, even at -160. We should see a finish here one way or another.

Jared Gooden will try again in his second UFC fight to get a win. He lost back in November via unanimous decision to Alan Jouban in his debut fight. The 27-year-old is 17-5 in his career and has only been knocked out once with zero submission losses, hence the big juice on the over 2.5 in this fight. Gooden does have 13 stoppage wins to his name, however, so maybe he can force the issue a bit here.

Abubakar Nurmagomedov also lost his UFC debut, but it came a long time ago against David Zawada. That fight was November 9, 2019. Nurmagomedov is giving up a little bit of size here, but he’s more of a grappler and a wrestler, whereas Gooden wants to stand up and bang. Whoever dictates the pace and style of this fight has a good chance to win it. It sure looks like Nurmagomedov is expected to do that, but I think the dog is worth consideration getting over a 2/1 return. This is a very long layoff for Nurmagomedov, who lacks impressive wins.

Jessica Penne has been away for a long time. The 38-year-old will step in the Octagon for the first time since April 22, 2017. That loss to Danielle Taylor was her third in a row and fourth in five fights. Penne has been away for so long because she received a four-year ban after violating USADA policy for a second time. Nobody is more motivated than a fighter trying to get back to the top, but she’s been out of action for quite some time.

Hannah Goldy still isn’t very big of a favorite and she hasn’t even fought since August 3, 2019. Frankly, when you’re talking about long layoffs, the degree may be irrelevant. Anything around 18 months sure seems like a lot, especially for somebody like Goldy, who wasn’t even established at that time. She lost to Miranda Granger the last time we saw her.

Your guess is as good as mine with this fight. These are some long layoffs.

This fight was supposed to take place a couple of weeks ago, but COVID-19 got in the way. Alonzo Menifield is looking to end a two-fight losing streak as he steps in against William Knight. Menifield lost to Devin Clark and Ovince Saint Preux to have a winless 2020 year in the UFC. That was on the heels of a strong 2019 with first-round knockout wins over Vinicius Moreira and Paul Craig.

Knight went from the small-time to the big-time in a hurry. He beat Cody Brundage on the Dana White Contender Series on September 1 and then fought Aleksa Camur just 25 days later in his first contract fight. Though Menifield has more data points at the UFC level, this one is priced as a money line pick ‘em with -110 both ways. It should be a good fight and one with some fireworks. Menifield is the longer, lankier fighter and he’s actually beaten some decent guys at this level. I lean his way.

Main card action begins with Jamie Mullarkey and Khama Worthy in the lightweight division. Worthy is the small favorite here, but we have what looks like another competitive fight in this one. Mullarkey is 0-2 in the UFC with decision losses to Brad Riddell and Fares Ziam more than a year apart. Mullarkey did face Alexander Volkanovski back in AFC in 2016, but lost by first-round knockout. Against better fighters, Mullarkey has struggled.

Therefore, the question you have to answer is whether or not Khama Worthy is an upper echelon fighter by those standards. Worthy is 2-1 in UFC. He was knocked out in his most recent fight by Ottman Azaitar, who improved to 13-0 with the win. That isn’t one that I’d hold against Worthy, as it also happened very early in the fight. Of course, Worthy only landed one shot and got blitzed early. I don’t see Mullarkey doing that.

The biggest moment of Miranda Maverick’s career should be every fight going forward. The 23-year-old has a great chance here against Gillian Robertson. The former Invicta top contender is 10-2 in her career including a UFC debut win over Liana Jojua, who took a beating in Round 1 so severe that a doctor suggested that the fight be stopped. Maverick landed 49 strikes in that first round and took some abuse herself in a very active opening salvo.

Gillian Robertson only has two more fights to her name than Maverick, but the 25-year-old has been in the UFC since 2017. Along the way, she’s had some nice wins and tough losses. She is 6-3 in her nine UFC fights, with her most recent being a decision loss to Talia Santos in December. She fought three times in 2020 with a couple of wins. It will be interesting to see Maverick’s takedown defense against a more accomplished fighter. So much so that I think Robertson is the pick here.

Marlon Vera is an excellent fighter, but he had some help in his knockout win over Sean O’Malley. In that fight back on August 15 at UFC 252, O’Malley rolled his ankle on the slick canvas and was rendered effectively useless for the fight. It was just a matter for Vera of leaning on his opponent until he fell over and that’s what happened. It was O’Malley’s only loss and he’ll be out for blood to avenge it against Thomas Almeida.

This is almost an unfair spot for Almeida. He’s lost four of his last five fights and now draws a top-end competitor who may have only lost his last fight because of that injury suffered early in the match. This line isn’t even high enough at this price, assuming O’Malley is fully healed.

Three years ago, we never would have expected to see Tyron Woodley lined like this. The 38-year-old was at the top of his game up until a UFC 235 loss to Kamaru Usman. Usman has not relinquished the title that he won from Woodley, but Woodley’s career has gone down the tubes. He’s lost to Gilbert Burns and Colby Covington in his two fights since. Father Time has certainly taken a toll on him, but he’s also gone into the fifth round in each of his last three fights and four of the last five.

This one won’t have championship rounds against Vicente Luque. This is a pretty big step up in class for Luque, who hasn’t fought anybody nearly as accomplished as Woodley. Luque was 2-0 in 2020 with wins over Randy Brown and Niko Price. If he can get this win, it could set up some big things down the line in the welterweight division.

My favorite play here is the over 2.5 at -170. It is very chalky, but Woodley has only been finished twice. While Luque possesses the punching power to do it, Woodley is such a savvy, experienced fighter that he should be able to last the full 15 here, especially after going the full 25 in three of his last five fights.

The highly anticipated third fight between Stipe Miocic and Daniel Cormier was sort of a disappointment. Well, not for Stipe bettors, but Cormier was inadvertently poked in the eye during the fight and it allowed Miocic to just keep pushing forward and eventually win by unanimous decision. Miocic could have a much tougher road here against a big man with big power in Francis Ngannou.

In the first fight, which took place back on January 20, 2018 at UFC 220, Stipe put on an absolute clinic. He had 200 strikes to 33 for Ngannou with remarkable efficiency and adept wrestling. Stipe had six takedowns in the fight. The champion is now 38 years old. The quicks have slowed. The strength has decreased. Stipe’s only three fights in that span have all come against Cormier.

Ngannou followed up his Stipe loss with something of a hangover performance against Derrick Lewis. After that, he scored first-round knockouts of Curtis Blaydes, Cain Velasquez, Junior dos Santos, and Jairzinho Rozenstruik to set up this rematch. Ngannou is 15-0 with finishes, but 0-3 with decisions.

Can Stipe at his advanced age fight Ngannou to a decision over 25 minutes? Nobody has ever knocked out the 34-year-old from Cameroon. It would seem that Stipe’s best path to victory is a decision win. Does he have the wrestling in him anymore? Can he avoid the punching power of Ngannou?

The trilogy with Cormier seemed to show the wear and tear on Stipe and who knows how the final fight would have gone without the eye poke?

As much as it pains this Clevelander, I have to go with Ngannou.