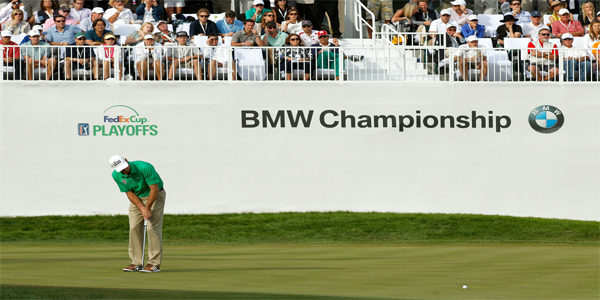 The field has been cut from 125 to 70 for this week’s BMW Championship. There are only three FedEx Cup Playoff events this season and this one is at Olympia Fields Country Club on the outskirts of Chicago. I kept thinking it was at Medinah Country Club because it was last year, but Olympia Fields will host its first PGA Tour event since the 2003 US Open when the first group tees off on Thursday.

That means that we’ll have to do a lot of digging for this event with no course form data to rely on. Some people say course form data doesn’t matter all that much and can’t hold a candle to recent form. I guess we’ll see how it all plays out here at Reference Number 01000082 on the US National Register of Historic Places.

We’ll use the odds from MyBookie Sportsbook to focus on the field. The entire list will be down below the content in the body of the article, but we’ll cite the odds on certain players as we go along.

The top 70 in the FedEx Cup standings are the only players allowed entry to this tournament. Quite a few notable names are missing, like Sergio Garcia, Rickie Fowler, and Brooks Koepka, but most of golf’s best will be on hand. The field will be cut to 30 for next week’s TOUR Championship at East Lake Golf Club, so that will be even more exclusive.

As you would expect, there are a ton of quality players below the cut line. The official standings are here, but you may want to consider some of the guys that really need a big showing for things like top five or top-10 finish props. Somebody like an Adam Scott, who sits 38th, Patrick Cantlay, who sits 37th, or Jason Day, who sits 50th.

Dustin Johnson is +800 at a course expected to play for the bombers. He is the favorite with Jon Rahm +1000, Bryson DeChambeau and Justin Thomas at +1400, Rory McIlroy and Xander Schauffele at +1800, and then Webb Simpson at +2000.

Remember that the setup for the TOUR Championship is that the top players get a head start with their scores. Everybody has all kinds of incentive this week.

We won’t see 30-under this week. Dustin Johnson’s assault on TPC Boston led to an historic performance, but we have a par 70 this week that will play close to 7,400 yards. There are only two par 5s that are over 600 yards and a 250-yard par 3. The North Course is the one in play here at Olympia Fields.

The greens are tough and on the smaller side. Several holes have a little bit of a dogleg left, so it seems like guys that draw the ball with some distance will have the most success off the tee. Trees line virtually every fairway, so hitting it to the short grass will help, especially with some tough second and third shots. There are some elevated greens, blind tee shots, strategically-placed hazards, and every hole on this course looks like a challenge, especially with how few golf shots have been hit here by the players.

It sounds as though the rough will be thick, upwards of 5+ inches on Thursday and only growing taller for the weekend.

This is our horse for course section and we don’t have much to go on with a lot of the PGA Tour pros. What we do have is some interesting data from the young guns. Bryson DeChambeau won the US Amateur here in 2015. The Illini Invitational is held here on a fairly regular basis. Matthew Wolff won that while at Oklahoma State in 2018. Collin Morikawa from Cal was second. Viktor Hovland, who also played at OSU, was sixth. Wolff is +4500. Morikawa is +2200. Hovland is +4500.

Cameron Champ won it in 2016 at Olympia Fields when he played for Texas A&M. He’s certainly a huge hitter and he’s +8000 this week. Maverick McNealy is +25000 and he won here back in 2015 in that Illini Invitational when he played at Stanford.

Jon Rahm made it into the quarterfinals in 2015 when DeChambeau won the US Amateur. McNealy lost to DeChambeau in the Round of 16 that year.

Does any of this matter in the context of handicapping this tournament? Probably not, but it does illustrate just how good those players were in college and why they’ve already had success on the PGA Tour.

Like most PGA Tour events, ball striking takes precedence here. This is a long course, but the biggest hitters can cut corners on doglegs and swing past the bunkers off the tee. If the rough is as penal as expected, then driving accuracy will carry some importance, but it does feel like it’s all about shortening the course this week.

There are so many good ball strikers with short prices this week, but I’ll be back on Daniel Berger again at +2200. Berger was a good grab at a higher price last week en route to finishing a distant third to DJ. Berger was fifth in SG: OTT and third in SG: Putting last week. He’ll have to swing it better on approach this week, but he’s a tremendous ball striker and has a win, two thirds, and a second since the restart. He’s also been the best scrambler on the tour this season, even better than Brendon Todd, Harris English, and Xander Schauffele.

BET DANIEL BERGER TO WIN THE BMW CHAMPIONSHIP AT MYBOOKIE!

Scottie Scheffler fired a 59 last week and finds himself at +3500 this week. Scheffler also has collegiate experience at this course, so maybe that will help, but the thing that has helped him the most is whatever adjustment he made after the Workday Charity Open. Scheffler has made four straight cuts with four straight top-25 finishes. He’s been fourth the last two events. Scheffler is a top-20 player in SG: Tee-to-Green this season and sits eighth in SG: OTT.

A lot of people are going to like Matthew Wolff this week. He’s +4500 with some pretty good collegiate data here. He’s also been playing quite well, with a fourth at the PGA Championship and a second at the Rocket Mortgage Classic. Wolff is also a strong ball striker. I won’t be on him this week, but you’ll see his name mentioned a lot. He’s 13th in SG: OTT.

Cameron Champ is +8000 and has the game off the tee to win, but he’s struggled on approach with the irons and around the green with the wedges. He’s probably worth a top-10 or top-20 finish prop, but being second in SG: OTT may not be enough to put him on the card for an outright.

Week in and week out, you can make a case for Corey Conners. He’s one of the Tour’s most underappreciated ball strikers, but he’s a bad putter. Conners is 12th in SG: OTT, 19th in SG: APP, and 19th in SG: T2G. He just can’t do much with it when he gets there. At +12500, he’ll draw some attention this week, but I’ve decided that it’s too hard to play long shots in elite fields and this is an elite field. As a top-10 or top-20 guy, he’s along the same lines as Champ.

Lastly, I’ll be on Tony Finau this week at +3300. Finau is 23rd in SG: OTT and 17th in SG: APP. He’s 10th in SG: T2G overall. Finau’s problems tend to come with the putter, but these are smaller putting surfaces and this course seems tilted quite a bit to SG: T2G. Finau missed the cut last week, but was fourth in SG: OTT. Prior to last week’s MC, he had three top-10 finishes in four events. He’s been a little inconsistent, but this course plays well for length and ball striking and that plays well for Finau.

BET TONY FINAU TO WIN THE BMW CHAMPIONSHIP AT MYBOOKIE!

This week’s picks are Finau at +3300, Daniel Berger at +2200, and Scottie Scheffler at +3500. It won’t be the least bit surprising if a chalk player wins and maybe this course is ideal for a big bomber like Rory or DeChambeau, but they’ve both had their issues. Maybe Justin Thomas wins at +1400 as the best overall ball striker on Tour, but I like the prices on those three plays.

I would also, as mentioned, consider top-10 and top-20 finish props for Champ and Conners. Conners really needs a good run this week to get into the top 30.