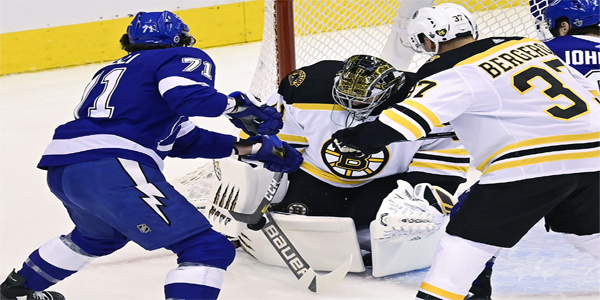 Despite Victor Hedman’s best efforts, the Tampa Bay Lightning came up short in Game 1. The Lightning trailed 3-0 just over a minute into the third period and Hedman’s two goals put some cosmetic touches on the outcome, but it wasn’t enough. The Bruins can put themselves in an excellent position by coming away with Game 2 on Tuesday night.

It was a pretty even game for the most part between the two best teams in the Eastern Conference in their second round best-of-seven series. The Game 2 line suggests a similar type of performance, as both teams are -110 with a total of 5.5 juiced on the under at BetDSI Sportsbook.

It was mostly what we would expect. The Bruins were the best team in the regular season and they were on their way to the Presidents Trophy for the most points in the league. Their reluctance to come back and play the Round Robin left a bad taste in the mouths of a lot of bettors going into their series against the Carolina Hurricanes, but they had no issues there. Their performance in that series and in Game 1 has silenced most of those critics in a hurry.

The Bruins scored the only power play goal in Game 1. The Lightning had a 6-v-5 goal with the extra attacker on Hedman’s second tally. Otherwise, again, everything was really similar. That shouldn’t come as a shock to anybody. These two teams really stood out during the regular season. Tampa Bay was +40 in 5-v-5 goal scoring with 162 scored and 122 against. The Bruins were +36 in 5-v-5 scoring with 141 scored and 105 against.

Boston was first in Point% in the regular season at .714%. Tampa Bay was tied for third with .657%. It is kind of a shame that these two teams can’t even meet in the conference finals because that’s where they both belong.

In any event, what happens in Game 2 will probably dictate how this series ends up. If Boston can take a 2-0 series lead, it seems tough for Tampa Bay to win four of five. If Tampa Bay can even up the series, we’re in for a long one.

It did appear that it took Tampa Bay a little while to get into the flow of Game 1. They dominated the second period, but wound up on the short end of a 1-0 frame because Jaroslav Halak stopped all 18 shots. If the Lightning can carry the last 40 minutes into the 60 minutes in this game, they stand a great chance of evening up the series.

Halak was great in Game 1, but this could be a series in which the difference between Halak and Tuukka Rask is realized. Rask, who was one of the best goaltenders in the league during the regular season with a 22.51 goals saved above average mark, opted out to be with his family. Halak was really solid in his own right with an 8.83 GSAA in 41 games, but the ceiling for Rask is higher than it is for Halak.

Andrei Vasilevskiy had a 12.13 GSAA. He could have been better during the regular season and he’s played well enough in the playoffs to this point, but the Lightning may have had an uphill climb if Rask had stuck around in the bubble. With Vasilevskiy’s ceiling higher than that of Halak’s, the two teams are evenly matched in this series to say the least.

With that in mind, the Lightning were the better team for enough of Game 1 to give them the nod in Game 2. It is a bummer that Steven Stamkos is still out and his offense was needed in the first game of the series, but the Lightning have gotten some really nice minutes from guys like Brayden Point and Alex Killorn in these playoffs. The Lightning will need some more offensive zone starts in this game so that they can establish their attack and puck possession, but it seems like they should achieve that.