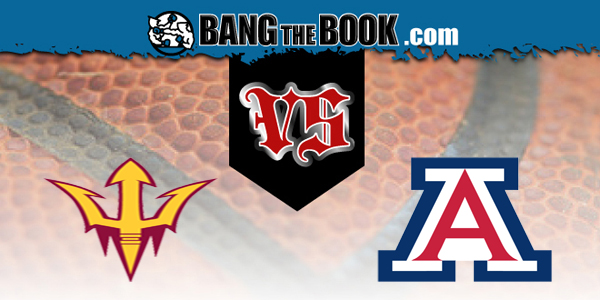 A few big names are in action on Monday night, as Texas Tech battles West Virginia and Syracuse takes on Virginia. Otherwise, it is a fairly quiet Monday night in the college basketball world. But, that doesn’t mean we can’t find some value on the card.

For that, we go to Tucson, where the Arizona Wildcats host the Arizona State Sun Devils. This is the late game on Monday with an 11 p.m. ET tip. Night owls can catch this game on ESPN2.

In looking at the betting board, Arizona is -5.5 with a total of 156 at Bovada Sportsbook, where you can get a 100% Deposit Match Bonus if you sign up through BangTheBook.

Let’s break down this #Pac12AfterDark matchup as we look to end Monday night with a winner.

It was another tough loss for Bobby Hurley’s bunch when these two teams met in Tempe last Thursday. Arizona came away with an 82-80 victory to send the Sun Devils to their fifth straight loss. In that span, ASU has lost in overtime to UCLA, by one to Oregon State, and then by two to their in-state rivals.

It has been a struggle to close out games. Arizona State is something of a positive regression team. They are 10th nationally in TO% on offense and 44th nationally in TO% on defense, but they simply haven’t maximized those extra possessions enough. They aren’t a bad offense, per se, but an average one at best, coming in 164th in eFG% at 50.4%.

The Sun Devils don’t really stand out offensively in any way, aside from taking care of the basketball. They are one of the nation’s worst offensive rebounding teams, but that didn’t play a huge rule last game against the Wildcats, as both teams had nine ORebs.

The loss right at the buzzer was particularly devastating for Arizona State because it came on a putback at the rim from 6-foot-11 freshman Azuolas Tubelis. Amazingly, it was a missed three that led to the putback. Missed threes have not been the MO for the Arizona State defense, as opponents are shooting 36.3% on triple tries.

Bad rebounding teams will struggle and ASU fits the bill. We’ll see if Arizona does better in that department here.

The Wildcats are one of the top rebounding teams in the nation, ranking in the top 15 in ORB% and top 40 in ORB% against. They’ve also shot 37.7% from the three-point line. In other words, everything that they do well is an area of weakness for Arizona State. However, the Wildcats only won by the game by two points. In order to cover this spread, they’ll have to win by at least six.

The line shot down from the +7 opener to +5.5. There really isn’t too much to the box score that would suggest such an adjustment from the last game. Arizona State had 12 more free throw attempts and six more points at the line, but still managed to lose. The Wildcats forced ASU into a 21.5% turnover percentage, the highest of the season for the team from Tempe.

Arizona is such a hard team to defend. A lot of teams around college basketball have one or two players that really stand out and shoulder the load. The Wildcats have several that grade above average offensively. It makes them a tough team to play against because a lot of different guys can hurt you in multiple ways. Arizona finishes well at the rim at 65% and could actually take more shots from there instead of settling for mid-range jumpers. If there is one big flaw for Sean Miller’s team, I would point to that.

Opponents have made 36.9% of their three-pointers in conference play against Arizona. It will be interesting to see if the ‘Cats can make an adjustment to that. For the season, they’ve done okay in that department, but also played a weak non-conference schedule. Perhaps that is why some people have hopped on the Arizona State side here with the early line movement.

The first game was played to 74 possessions, which was a pretty quick pace for Arizona. Only one other regulation game in conference play has gone that quick and that was against USC. Two non-conference games against Grambling State and Eastern Washington to start the season played to 75 possessions.

That might be an adjustment for Arizona here. They’ll also have to do a better job defending the perimeter. Even going 11-for-21 last game, Arizona State is still only shooting 32.7% in conference play from three.

The opening move makes sense here, especially with how tightly contested the last game was, but I wouldn’t expect ASU to have a big free throw advantage here. In fact, I’d expect it the other way if Arizona can play from in front with a game lined in fouling range. I would also expect Arizona to slow it down and control the pace and tempo of the game a bit more.

I’ll go against the early line move here and look to lay Arizona -5.5.