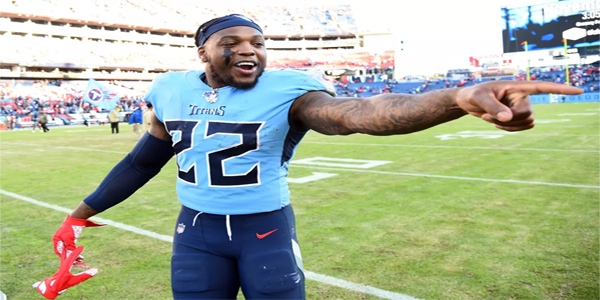 If you are the type of sports bettor who likes to wager on props, you are going to find a home with BetOnline if you haven’t found it already. When you locate a game in the sportsbook interface, just look to the right and you will see a plus sign (or a cross, if that’s the way you want to interpret it). Click it and a slew of props will appear. So go ahead and have some fun. And you can create your own head-to-head props between certain players as well.

Let’s take a look at some of the props that are available on Sunday’s AFC playoff game between the Tennessee Titans and Baltimore Ravens, scheduled to take place in Nashville (1:05 PM ET).

This may be the prop most people have an interest in. We remember the kind of rampage Henry went on last season, with 896 yards in his last six regular season appearances (149.3 ypg), followed by 182 against New England and then 195 vs.Baltimore in the playoffs.

In those first two post-season games, the Titans were not shy about handing him the ball, as he got 64 carries.

Well, now Henry is on fire again, with three efforts of at least 175 yards in his last six contests. That includes a franchise record of 250 yards last time out against Houston. Earlier in the season, he had 133 yards against the Ravens. So clearly they have difficulty against him.

Baltimore has surrendered 4.6 yards a carry, which is definitely not the best figure in the NFL this season. So going “Over” on this prop is not unreasonable at all.

One reason is that Tennessee has done it in each of its last two meetings with Baltimore, in games that Ryan Tannehill has started. The Ravens have given no indication that they have been able to put together a defensive scheme to stop Derrick Henry. In fact, who has?

And the Titans with Tannehill have been the NFL’s best team in the red zone – with regard to the percentage of times they score a touchdown. We are going back to when Tannehill first took the reins last season, mind you. But they are second best in the league THIS season (76.2% touchdowns).

And remember that when we look at that kind of proficiency, we are often talking about a four-point difference, which is of course the difference between kicking a field goal and scoring a touchdown.

That will work going the other way as well. The Titans’ defense has often failed to prevent teams from scoring in the red zone -so often, in fact, that they have given up TD’s on 69.2% of those occasions, and only two teams in the NFL have done worse than that.

Let’s examine yet another BetOnline prop:

First score of Game is Touchdown

Okay, let’s give you some information that might help guide you on this prop.

On the offensive side, Baltimore is a little more toward the middle of the pack, with a ratio of 1.96 touchdowns for every field goal. But Tennessee is again disproportionate compared to the other teams in the NFL, with a ratio of 3-to-1, which is the third highest in the league.

Based on these numbers, you might just experience some value on the “yes.”

At BetOnline you can play props to your heart’s content on these NFL playoff games, and can also get in on wagers in real time after the game begins with the “Live Betting” option in the site menu…….. You will be able to make deposits in any number of ways, including the digital currency of Bitcoin, and you won’t have to play any transaction fees for it!