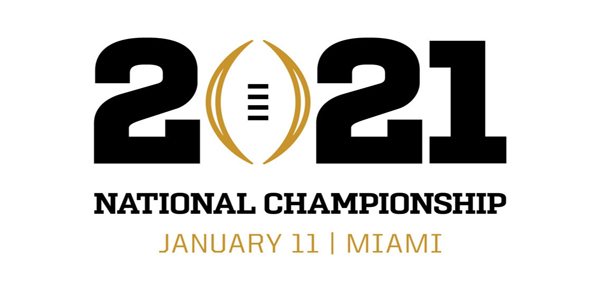 The Alabama Crimson Tide will make their fifth National Championship Game appearance in the College Football Playoff Era. Ohio State will only make their second, but the Buckeyes have been in the semifinal four times. They’ve only been in the title game once and that was a win over Oregon in the first CFP NCG for the 2014 season.

Alabama is favored by 8.5 points with a total of 75 at BetOnline Sportsbook. You’ll find 75.5 across most of the global markets, but we have seen some interest in the under over the last couple of days. You can bet that it’s not public money on that total, so there are some sharper investors with respected opinions that have sided with the under, at least for now.

Tons of money will come in on this game on Monday to impact the side and total at the absolute highest limits. We’ll also see more involvement on the prop betting side as more and more of those options get posted in the betting markets.

Let’s take a look at the penultimate college football game of this weird and wonky 2020 season and see if we can find something to play.

Dabo Swinney didn’t want the smoke. He didn’t want the Buckeyes, a team that outplayed his Clemson Tigers in last season’s Fiesta Bowl College Football Playoff Semifinal. So, he voted them 11th in the coaches poll. He lobbied against them as a team that “only played six games”. He then watched as his team got crushed 49-28.

There is a horse racing comparison to apply here. A lot of pony players won’t come back on a horse after his best run ever or his top performance in a long time. Both teams were motivated for the Sugar Bowl, but Ohio State took it to another level. They looked like the more focused team. The team that actually made adjustments from the previous game. The team that played its best game of the season at the right time.

It was a game that Ohio State put a lot of energy and emphasis into winning. Now the Buckeyes have to come back 10 days later with an injured quarterback and find a way to beat a juggernaut Alabama team that some have called the best ever because of how they’ve performed relative to expectation. It is an unenviable spot for the Buckeyes to be in.

But when you look at Ohio State, there was no question that this was a top-four team in the nation. Justin Fields could very well be the second quarterback taken in the NFL Draft. He just outshined the one that will go first. Ohio State recruits at an elite level that really only teams like Alabama and Georgia can compete with these days. From a talent standpoint, the Buckeyes are a playoff-worthy team and one that could very well win the title.

Was it a title-worthy schedule for this Ohio State squad? Not at all. The Big Ten was terrible. In a lot of ways, the SEC didn’t stack up either and the Crimson Tide were taken to the brink by Florida. They beat a Georgia team that hadn’t figured out JT Daniels was the best option and did hammer a Texas A&M team that wound up being quite good.

Nobody should question how much Ohio State deserves to be here. Fields proved what kind of prospect he is by raining down six touchdown passes and 385 yards on Clemson’s defense. Trey Sermon fell seven yards short of 200 with 31 carries. The Buckeyes dominated the game. It did a lot to ease fears with Fields, who struggled badly in the Big Ten Championship Game against Northwestern.

Big play receiver Chris Olave had two touchdowns and 132 receiving yards. The Buckeyes found their tight ends in the red zone in Luke Farrell and Jeremy Ruckert. It was a different plan of attack from Ryan Day. The Buckeyes pulled a lot of tricks out of their bag that elevated the profile of the team.

To top it off, the Ohio State defense had a spectacular showing. Trevor Lawrence threw for 400 yards, mostly on volume, as the Tigers only had 12.1 yards per reception. Travis Etienne did nothing in the run game and Clemson became one-dimensional. Shaun Wade, who will draw the unfortunate matchup of Heisman Trophy winner Devonta Smith in this game, struggled badly, but most of the rest of the Buckeyes played well.

Kerry Coombs had a great gameplan and Clemson played right into it. The prep window for Alabama is much shorter and Ohio State doesn’t have recent head-to-head film to rely on. The Buckeyes offense will get theirs. How the defense plays could very well define the winner, both against the spread and outright.

Nick Saban is the GOAT. He’s the best college football coach of all-time. And don’t sit here and say it’s because he’s had the best players. That’s a right that you earn by winning and by winning a lot on the big stage.

Here’s the thing, though. Since the College Football Playoff began with the 2014 season, Saban is 0-4 ATS in the National Championship Game. The Tide lost as a favorite to Ohio State in the semifinal back in 2014. The Tide failed to cover against Clemson in the 45-40 win in the 2015 title game and then lost twice to Clemson.

In the BCS era, that wasn’t the case. That was when Saban and his support staff had one game to plan for and a month to do it. Now, even after advancing from the semifinal, there is another game to play and one with a shorter turnaround. So, we’ll see if Alabama can fare better in that department this time around.

The Tide certainly have the personnel to do it. The offense didn’t lose a beat with Mac Jones instead of Tua Tagovailoa. In fact, Jones outperformed Tua’s junior season. Jones completed 77% of his passes with a 36/4 TD/INT ratio. Tua completed 71.4% with a 33/3 TD/INT ratio. A remarkable group of weapons has helped Jones tremendously, as Devonta Smith won the Heisman Trophy with 1,641 receiving yards and 20 touchdowns.

Smith isn’t the only one. John Metchie was a big-play guy with 835 yards on 47 catches. Najee Harris ran for 1,387 yards and 24 touchdowns. Now it looks as though Jones will also embrace the return of Jaylen Waddle, who could very well be the best wide receiver on the team. Waddle had 25 catches for 557 yards before suffering an ankle injury on the opening kickoff against Tennessee.

Matchup nightmare Jahleel Billingsley is listed as a sophomore tight end, but he’s 6-foot-4 and 230 pounds with length and good speed. This is an embarrassment of riches for Jones against an Ohio State defense that has been picked apart through the air at times.

Evaluating Alabama defensively is a challenge. When they were good, they were great. When they weren’t great, it was what separated their full-season numbers from “elite” and “exceptional”. Teams like Ole Miss and Florida did move the ball with great success against Alabama. On the other hand, it was a struggle for a lot of other SEC offenses and Notre Dame didn’t have a ton of success in the Rose Bowl with just 4.7 yards per play.

There really is a lot to look at with a game of this magnitude. Both rosters are littered with four-star and five-star talent. Even the three-star players have been elevated by being part of programs this strong. Each individual matchup can be put under a microscope.

It is very interesting that this line opened 7 or 7.5, the same place Ohio State was for the most part against Clemson. I don’t anybody believes Alabama and Clemson are a pick ‘em on a neutral, but it does seem Ohio State may have gotten too much love for that victory over the Tigers. The line moved up to 8.5 and in some cases 9 and that seems fairer to me.

Stepping in front of these two offenses to take an under sounds hard to do, even with a historically high 75 number. Five of the six National Championship games have seen a team get to the 40s, but only one would have gone over this year’s total.

There probably won’t be many stops in this game, so which offense do you trust more? For me, that’s Alabama. Ohio State takes some deep shots and has run the ball really well with Sermon, but Fields is less than 100% and Alabama has more weapons.

Player props are the way to attack this game, but the pick is Alabama -8.5