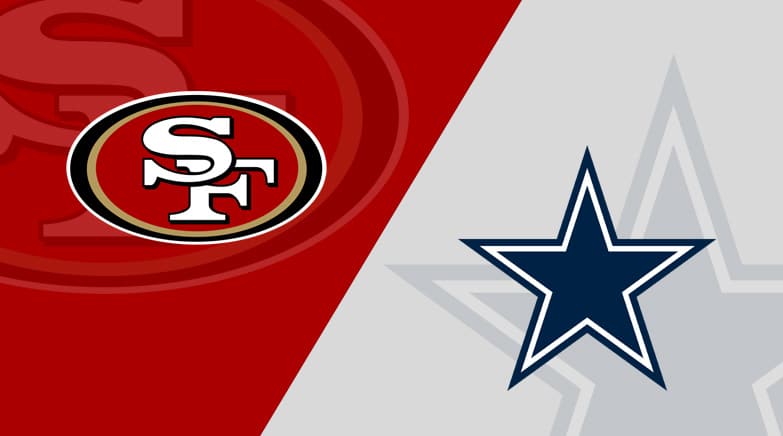 The 2022 NFL Playoffs wild-card round brings the highly-anticipated clash at AT&T Stadium in Arlington, Texas, so we have prepared the best 49ers vs. Cowboys betting pick along with the latest odds update on Bookmaker Sportsbook.

San Francisco meets Dallas for the first time since December 2020. The Cowboys are undefeated in three straight encounters with the Niners, opening as 3-point favorites with a total of 51.0 points this time around.

The 49ers beat the Rams to sneak into the playoffs

The San Francisco 49ers (10-7; 9-8 ATS) needed a victory at the Los Angeles Rams in Week 18 to clinch the playoff spot in the NFC. They delivered in dramatic fashion, outlasting their divisional rivals 27-24 in overtime.

The Niners overcame a 17-point deficit at SoFi Stadium. They outgained the Rams 449-265, while Deebo Samuel led the way with 140 yards from scrimmage and a TD pass for Jauan Jennings, who finished the game with six catches for 94 yards and a pair of scores.

Deebo has been outstanding as of late, scoring four touchdowns in his previous five appearances. He finished the regular season with 1,405 receiving yards, 365 rushing yards, and 14 touchdowns in total. Jimmy Garoppolo has struggled with a thumb injury in the last two weeks, but he’ll certainly start under center against Dallas.

Jimmy G has tossed for 1468 yards, seven touchdowns, and six interceptions over his previous five appearances. The Niners will continue to lean on their ground game that is racking up 127.4 yards per contest (7th in the NFL).

The Cowboys hammered Philadelphia in Week 18

The Dallas Cowboys (12-5; 13-4 ATS) are coming off a 51-26 victory at the Philadelphia Eagles this past Saturday. It was the meaningless duel for the Eagles, while the Cowboys wanted to humiliate their divisional rivals and clinch the No. 3 seed in the NFC in style.

Dak Prescott tossed for 295 yards and five touchdowns at Lincoln Financial Field in Philadelphia. He finished 2021 with 4,449 yards, 37 touchdowns, and ten interceptions, leading the charge for the highest-scoring offense in the NFL (31.2 PPG). CeeDee Lamb recorded 79 receptions for 1,102 yards, while Amari Cooper and Dalton Schultz combined for 1,673 yards and 16 touchdowns.

The Cowboys are posting 124.6 rushing yards per contest (9th in the league), as Ezekiel Elliott and Tony Pollard both enjoyed a nice season. Elliott had 1,002 rushing yards and 12 touchdowns in total, while Pollard averaged 5.5 yards per carry.

Dallas has gone 5-1 SU and ATS in its last six games. That lone loss came at home in Week 17 when the Cowboys got beaten by the Arizona Cardinals 25-22 as firm 6.5-point favorites.

This game will be a joy to watch, and I’m expecting a dramatic finish of a tight encounter. Hereof, with three points on the table, I’m going with the underdogs to cover. San Francisco is finally healthy and ready to roll, so Dallas will have a difficult job to satisfy the odds in front of the home fans.

The Cowboys surrender 21.1 points per game (7th in the NFL), but their run D ranks 16th in the league, allowing 112.8 yards per game. On the other side, the 49ers yield 21.5 points per game (tied-9th) on 103.5 rushing yards (7th) and 206.5 passing yards (6th). San Francisco should have enough firepower to deal with the Cowboys’ electrified offense and keep it close down the stretch.

Both San Francisco and Dallas should easily surpass a 20-point mark in this game, especially if we get a close battle in crunch time. Therefore, I’m taking the over on the totals even though the under is 8-3 in Dallas’ last 11 games and 4-1 in San Francisco’s previous five.

The Niners have scored 23 or more points in four of their last five outings. On the other side, the Cowboys have hit a 50-point mark in two of their previous three contests. The over is 8-2 in the last ten meetings between San Francisco and Dallas. Back in 2020, the Cowboys beat the 49ers 41-33 as 3.5-point home dogs.