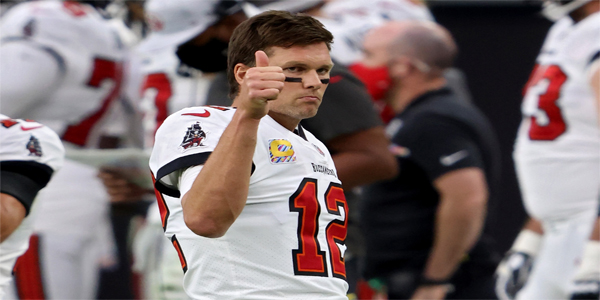 When you have an account at BetOnline, you get a lot of advantages, including a $1,000 NFL Playoffs Welcome Bonus, and of course, Odds Booster, which offers greatly enhanced payouts on pre-selected parlays.

What you also get are a virtual plethora of props that you can play on each and every game.

When you go into the sportsbook, just look for the “Plus” sign with the red background and all the props will unfold. We have chosen one of them to analyze, but there are dozens and dozens more.

This one involves the NFC Wild Card game (8:15 PM ET) between the Tampa Bay Buccaneers and Washington Football Team, involving the performance of Tom Brady.

Here are the numbers on the BetOnline prop for his total passing yardage:

So as you can see, it’s a hefty total, just about nine yards under his season average.

Brady seems to still be reaching great heights at age 43. He’s had the fifth highest yardage total in his 21-year career. And in only one season has he thrown for more TD’s. That was the magical 2007 campaign, when he had 50. He is also only one completion off his career high for a season.

And we have to tell you – what really surprised us when we were looking at this was that Brady, who maybe took a rap or two all his years in New England as someone who executed “long handoffs,” seemed to get it down the field more than he had in the past. In fact, he led all NFL quarterbacks in the category of “Intended Air Yards,” which identifies how far he threw his passes (on average) beyond the line of scrimmage. His figure was 9.1 yards. Washington’s Alex Smith, by comparison, is last at 5.1.

That’s the Bruce Arians influence at work, we can assure you.

But looking at this prop specifically, we have some reservations about Brady being able to reach it. BetOnline customers may be aware that Washington has the #3 defense in the league in points and yards allowed on a per-drive basis, and that they are extra stingy in the red zone (third best), after residing in the #1 position for much of the season. They have held eight opponents to 300 yards or less. And they are fourth best in the metric of “sack percentage.”

In point of fact, they may be the best defense Brady and the Bucs have faced all season, outside of the Los Angeles Rams.

If you take a look at a group of four playoff teams the Bucs have faced, with solid defenses – the Rams, New Orleans Saints, Chicago Bears and Green Bay Packers – you’ll find some interesting things in the five combined games Brady has played against them.

Those games accounted for:

* Five of his six lowest “yards per attempt” averages

All told, in those five games, Brady completed 59.5%, which is well off his season average, for just 5.7 yards an attempt (almost two full yards behind on that one), with seven touchdowns and seven interceptions, which needless to say is way off his 3.3-to-1 TD-INT ratio. if you watched some of those games, you’d see that he often looked confused and frustrated, and that is what happened when he went up against the most capable stop units.

So yes, we are feeling confident enough about going “UNDER” on this total yardage prop.

The props keep coming at BetOnline, where you can also wager during the game with the “Live Betting” option….. Don’t forget that Odds Booster beats the heck out of any payouts you’re currently getting on parlays, and remember that you can deposit in every way imaginable, including digital currencies like Bitcoin!