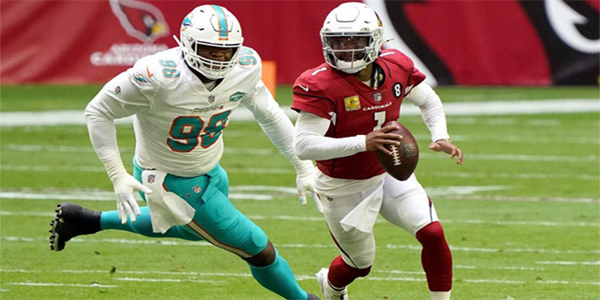 The problem, it seems, with the Broncos is that they can’t play two halves of football. In the last two weeks, they have fallen well behind against both the Chargers and Falcons. They won the first and came up just short in the second. Drew Lock is a bit of a gunslinger, in the sense that he takes shots down the field. His average of 9.4 Intended Air Yards per attempt is tops in the NFL.

And Lock, who is without Courtney Sutton, has been able to make a nice connection with rookie Jerry Jeudy. And this Raider team is one of the more permissive in the NFL when it comes to defending against the pass.

Because Denver has all the capability in the world to run it, the resulting balance, we’re figuring, gives them a shot at an upset, especially since there is no “home field advantage” that we can perceive from the Raiders’ new home at Allegiant Stadium.

But we also acknowledge that this number on the total is kind of reasonable. Vic Fangio came to this head coaching post in Denver with a reputation as a defensive mind. And we’re sure that was well-earned. Still, this team was lucky to have held then-Oakland to 39 points combined in the two meetings last season, despite 650 yards through the air for Derek Carr, who we should note has been intercepted only twice so far.

We’re okay going OVER the total in this one, and that is the way Jon Gruden’s squad has been trending (6-1-1 to that effect on the year).

One of the reasons the Bills have played six games over the total this season is that they simply don’t have as good a defense this year as they did last, and don’t do nearly as good a job across the defensive front. The Bills have surrendered 4.6 yards a carry, and they’re also 20th in the league a telling metric called “Adjusted Line Yards.”

This suggests to us that the Cardinals can do some business on the ground. And it looks very much like Kenyan Drake, who was sitting out with an ankle injury, is going to get an opportunity to play. They’ve scored 30 or more points for games in a row, and currently they rank second in the league in rushing yards per game. Imagine that for a moment – did you ever think you would hear or read someone saying that when Kliff Kingsbury and his Air Raid offense took over last season?

Josh Allen is coming off a huge game against Seattle, in which he passed for over 400 yards. But when you think about it, that’s not so far above the average passing yardage the defenseless Seahawks have surrendered on a per-game basis. The Cards are considerably more difficult to throw against, and as we continue to mention when discussing this team, they are the league’s second best defense in red zone situations (allowing just 50% touchdowns).

Considering some of that, we feel a little bit comfortable, at this number, siding with ARIZONA.

BetOnline keeps you plenty busy with pro football, including NFL props that cover just about everything…… And if you are looking for better-than-usual payouts on pre-selected parlays, then check out Odds Booster…… If you want to use Bitcoin, you can make your deposit fast and easy and without a fee!

Sunday Night NFL Props — How ‘Predictable’ is the Ravens’ Offense?