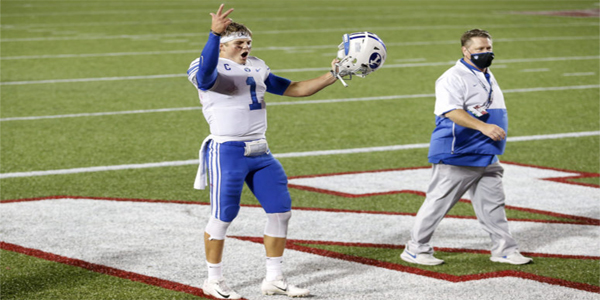 BetOnline has all kinds of wagering options available for the NFL Draft, which begins on April 29 at 8 PM ET.

One of them involves the second overall draft. Now, we admit that it is more or less a fait accompli, something that is reflected in the odds, but it gives us a chance to talk a little about the New York Jets, who own that pick and are priced at +1400 to win the AFC East in 2021.

Last season was an unmitigated disaster for the Jets, although some of Adam Gase’s harsher critics could swear they saw all of it coming. The team has had so little to offer in the way of firepower that you can almost make the case that it’s difficult to gauge the progress of Sam Darnold.

But Joe Douglas and new head coach Robert Saleh apparently figured that it was time for a change. Maybe they thought this was about as far as they could go with him. So dealing him away to the Carolina Panthers is a sure sign that they take a quarterback when they pick second. So you can forget about Penei Sewell (+3300), as good a player as he is. And the Jets were happy with tackle Mekhi Becton, last year’s #1 pick, who had some dominant moments when he was healthy.

Wilson is rightfully the huge favorite at BetOnline, but he could be facing some of the same fundamental problems as Darnold did. This team needs more pop in its offense. They have taken a few steps. Le’Veon Bell was simply not used right by Gase, and he forced them to let him go. Tevin Coleman was with Saleh and offensive coordinator Mike LaFleur in San Francisco, but it is doubtful he can be the lead back. Keep in mind, however, that the Jets also have the 23rd, 34th and 66th overall picks, so they can snag a useful running back in the draft.

Wide receiver Keelan Cole had 642 yards with Jacksonville last season, but the big acquisition among the skill guys is Corey Davis, who was just below the 1000-yard mark in Tennessee last year. As it stands right now, he would be the #1 threat Wilson would be targeting against opposing secondaries.

The Jets actually need TWO quarterbacks, because invariably you want that veteran on hand to steady the big-ticket rookie, and maybe even keep the seat warm until the kid’s ready. Joe Flacco was last year’s backup, and he was pressed into action when Darnold was hurt. But he has departed. Reportedly the Jets were talking with Brian Hoyer, but there are other possibilities, and that may include a return for Teddy Bridgewater, depending on what the Panthers ultimately do with him after picking up Darnold, although we don’t think he’d fit under the salary cap.

Wilson was a highly-touted prospect for BYU coming out of high school, but was considered an underachiever by some after his first two seasons. As a junior, however, he sprouted. Wilson had 33 touchdown passes with only three interceptions, averaging eleven yards an attempt. And although the Cougars were not able to play the most robust schedule, he did burn Houston for 400 yards, Boise State for 360 and UCF for 425.

Wilson is praised for “athletic ability,” which generally means he can pull the ball down and run with it. But he also is able to improvise well, and has a quick release, with the ability to throw it on the run. Whether he can contribute more than Darnold did is anybody’s guess.

Or maybe it isn’t. Gil Brandt, the Hall of Fame personnel man who helped create years of greatness with the Dallas Cowboys of the 60s, 70s and 80s, said that given a choice between Wilson and Trevor Lawrence (the likely #1 pick), he’d take Wilson. And, “Honestly, I’m surprised the Jaguars’ new head coach didn’t show up at BYU’s pro day.”

Will Urban Meyer wind up regretting that decision?

Pro football lives on at BetOnline, where you can find a virtual plethora of odds on the upcoming NFL Draft. And don’t forget that they have all the NFL futures you need as well…….. Stay on the lookout for Odds Boosters, which give you greatly enhanced payouts for pre-selected parlays, every day of the week…….. And you can open up an account with every method imaginable, including cryptocurrencies like Bitcoin!