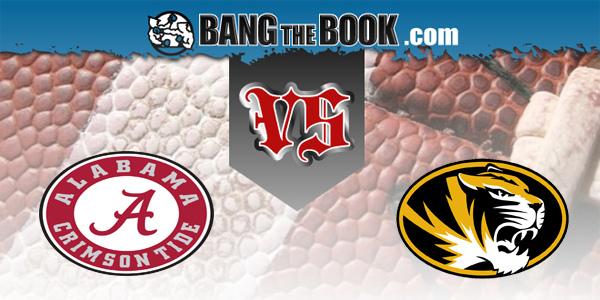 For new head coach Eli Drinkwitz of the Missouri Tigers, the schedule didn’t quite go the way he intended, and he won’t have time to “ease” into the job. The Tigers had been scheduled to face Central Arkansas and Vanderbilt in the first two games, but now, with the pandemic causing changes all over the place, they get a booby prize of sorts with the second-ranked Alabama Crimson Tide as their opener.

They’ll actually have the allowable number of fans – 11,700 of them – in attendance at Faurot Field in Columbia, MO for the game, which kicks off at 7 PM ET. BetAnySports customers can get reduced juice, and they also have the opportunity to place wagers after the action has started, using the facilities of Sports Betting Prime.

Yes, Crimson Tide fans have become accustomed to their team being in the running to play for the national championship. So they were sorely disappointed when Nick Saban’s squad lost to both LSU and Auburn in real donnybrooks, and the Citrus Bowl (a win over Michigan) was hardly any consolation.

But it is time to move forward, and at least they know they’ll do it with one of the nation’s top running backs in Najee Harris, who, after a season where he gained 1224 yards, will make himself a Heisman candidate if ‘Bama is in the national title conversation. That’s where Tua Tagovailoa was at the outset of last season, but his season-injury gave Mac Jones an opportunity to get a head start on the job. He responded pretty well, with almost 70% completions and a sizzling 14-3 TD-INT ratio.

In the college football betting odds that have been posted on this game by the folks at BetAnySports, the Tide is laying a lot of lumber:

Barry Odom did not exactly go out with a bang, pointspread-wise, as the Missouri coach. He dropped his last seven games against the line. This is a big impost. What can Missouri do to improve its chances to make this competitive?

Well, they can run the ball.

It may have surprised some folks that Alabama gave up 137 yards a game on the ground last season. But there were injuries, particularly one to Dylan Moses that knocked him out for the entire season. And they only return one member of the two-deep on the defensive line. But Moses is back. And at a school like ‘Bama, where they seem to send linemen every year into the NFL, that is deceiving. They have the talent. The question might be whether they are ready for Mizzou’s scheme.

Under Drinkwitz that involves playing a no-huddle offense. But such a thing is risky unless you’ve got everything in sync. This college season has not lent itself to the kind of prep time that is ideal for anyone, especially a new coach coming in with a new approach.

Drinkwitz is very familiar with Alabama football, from his days as an assistant at Auburn, including one where he won a national title under Gene Chizik. Of course, he doesn’t have the same horses to work with here. And he spent only one year as a head coach, although it was a very successful one at Appalachian State, where he went 12-1, achieved a national ranking, and left prior to the New Orleans Bowl to assume his current post. The truth, however, is that he benefited from the residue of Scott Satterfield’s presence at ASU.

He has promoted a four-way quarterback battle in his first year on the job. That’s now three ways with the announced transfer of Taylor Powell. We fully expect that TCU transfer Shawn Robinson will get the most playing time, but when you have a “competition” for the position, the eventual starter loses valuable snaps in practice.

And the general consensus is that Missouri does not possess an SEC-caliber offensive line, so this is an uphill battle.

In case this means anything to you, Alabama has excelled in season openers under Saban, with a 13-0 record and a point differential of 528-144. We give them a better chance of hitting the ground running hard. We’re laying the points with the favorite here. ‘BAMA

BetAnySports gives you better value with reduced juice, and after the kickoff, you can place wagers in real-time through the magic of Sports Betting Prime……. Make your deposits in a number of different ways, including your debit or credit card, person-to-person transfers and the virtual currency of Bitcoin, which is fast and easy with their automated system, and NEVER incurs a transaction fee!