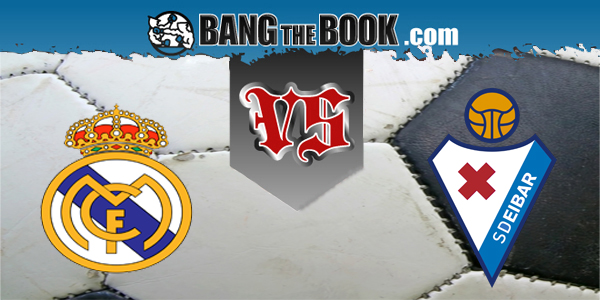 For BetAnySports patrons who are not familiar, there are a number of titans in La Liga, and two of them are located right at the top. Barcelona and Real Madrid are the two most valuable franchises in world soccer, and they are also among the top ten most valuable sports franchises, period (Source: the Forbes magazine annual survey).

And it is not a coincidence that they are 1-2 in the La Liga standings, neck and neck for the championship. At the moment,. Barcelona has a lead of two points (58 to 56), which means that every match counts a lot.

It’s also a tremendous opportunity when a team can face a lesser light. And it is an opportunity that absolutely can not be blown. And that is the situation in front of Real Madrid as it takes on Eibar in a Sunday matchup that kicks off at 1:30 PM ET. It will be televised in the United States by beIN Sports.

This is the first game back for both sides, and begins an aggressive schedule that will hopefully conclude the season by mid-July. There is a lot of jockeying for position for spots in the next Champions League competition, but those are for the third and fourth slots. Barcelona and Real Madrid are safely in.

Here are the odds on Sunday’s La Liga contest, as they are posted at BetAnySports. As you can see, Real Madrid, which is the home team, is an overwhelming favorite:

In the 20-team league, Eibar sits in 16th position, languishing with a record of seven wins and 14 losses with six draws, and with just 27 points, there is a chance they could become a victim of relegation.

They certainly went quietly in the previous meeting, blanked 4-0 at Ipurua Municipal Stadium. Considering the virus-related shutdown, that was a long time ago. And Real was arguably much sharper at that stage of the season, as they lost only one time in their first 24 games.

That said, Eibar has pulled off shockers against three of the top eight teams in the standings – Sevilla, Atletico Madrid and Villareal – and although it is obviously worth noting that these matches have been on their home grounds, there is seemingly less of a home field advantage to be derived for Los Blancos in an atmosphere without live fan support. So does being in enemy territory make a big difference at this point?

Good question, especially considering that the venue has changed. Real will move ahead at the Estadio Alfredo Di Stefano for the remainder of the schedule.

Well, Pedro Leon of the Eibar side, who previously played with Real, thinks that it will be just as difficult. “We know that facing Real Madrid at the Di Stefano will be just as hard as playing at the Bernabeu,” he said, referring to Real’s more familiar home, – the Santiago Bernabéu Stadium – which is being renovated.

Goal differential is a statistic that could mean something in the end, and Barcelona holds a slight edge over Real in that category as well (+32 to +30). So if you were wondering, yes, there is a certain motive to run up a score.

And Eibar is hardly the sturdiest defensive club in La Liga, as only three squads have surrendered more goals than their 41 (in 27 games).

But that doesn’t always work so neatly, does it?

Recent form has not been on Real’s side; across all competitions (this includes a defeat to Man City in the first leg of a Champions league double), they have won just one of their last five matches. Notably, though, that was a 2-0 shutout of Barcelona.

There are quite a few unknowns about this long hiatus and what it could do to a team. An adjusted goal spread of 2.5 with Eibar at -215 may be well worth looking at.

Wager on La Liga and all the other European soccer action at BetAnySports, where you have alternate lines to take advantage of, as well as Sports Betting Prime, where you can wager on the matches in progress……… Don’t forget that you’ve got five different casino options, including the Vegas Live Dealer and Lucky Live Dealer, providing a lot of real-time thrills………. Get your account opened by using a debit or credit card, person-to-person transfer or the virtual currency of Bitcoin, which is fast and easy with their automated system, and NEVER incurs a transaction fee!