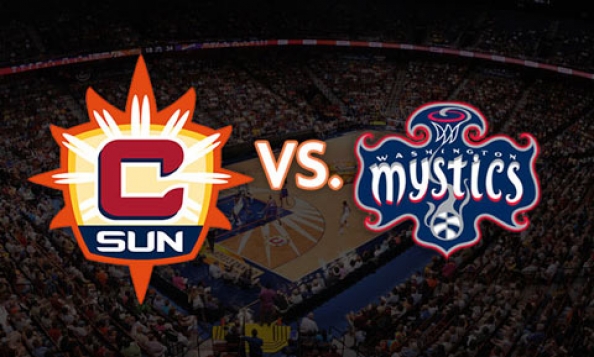 The Washington Mystics put on a strong performance in Game 3 of the 2019 WNBA Finals to take a 2-1 lead in the series. They easily defeated the Connecticut Sun 94-81 at Mohegan Sun Arena in Uncasville and will try to finish the job Tuesday night in Game 4 on the road. The Mystics bounced back from a 99-87 loss in Game 2 on the home court, showing once again that their offense is unstoppable. However, the Sun won’t go away easily and will try their best to force Game 5 in Washington.

Both Washington and Connecticut are coming in full strength. The Mystics can count on Elena Delle Done who’s playing with the herniated disk in her back.

Despite a tough loss in Game 3 at home, Connecticut opened as a 1-point fave with the total at 172.5 points and the Mystics at -105 money line odds. The Mystics were listed as 2.5-point underdogs in the previous clash.

Both the Mystics and Sun are playing for their first-ever WNBA Championship. Connecticut is in the Finals for the first time since 2005, while Washington lost to Seattle in the 2018 WNBA Finals.

The hosts are playing with their backs against the wall. After pulling off an upset in Game 2 on the road, they suffered a tough loss in Game 3 at home which certainly damaged their confidence. On the other side, the Mystics cannot be at the better place, especially with Elena Delle Done back on the floor.

Elena Delle Donne is a key player for the Mystics and arguably the best player in the league. She played just two minutes in Game 2 and the Mystics looked lost without her. Elena returned in Game 3 to account for 13 points and six boards in 26 minutes on the floor. What’s more important, the Mystics were confident on both sides of the ball with their best player in the game.

The Mystics hit whopping 16 triples out of 27 attempts from deep while making 50.7% of their field goals. After losing the battle on the glass in Game 2, the Mystics outrebounded the Sun 34-27 on Sunday. On the other side, Connecticut made just five of its 20 attempts from beyond the arc and couldn’t find a way to slow down the Mystics’ offense.

Jonquel Jones had another poor game for the Sun. After posting 32 points and 18 rebounds in Game 2, Jones had only nine points and nine boards in Game 3. Alyssa Thomas tallied 13 points, eight rebounds, and nine assists, while Jasmine Thomas and Shekinna Stricklen both added 16 points each. Kristi Toliver led the way for the Mystics with 20 points and 10 assists, while Emma Meesseman added 21 points off the bench.

Although Connecticut is allowing 79.2 points per game this postseason, the Sun just cannot deal with the Mystics’ offense. Washington is scoring 92.1 points per game in the playoffs while making 47.6% of its field goals.

I think the Mystics will finish the job in four games. Although Delle Donne is playing through pain, that herniated disk allows her to play, and her presence is invaluable for the Mystics. Connecticut is struggling defensively in this series, so I’m backing the Mystics to win.

When it comes to the totals, I expect to see another high-scoring affair. The Mystics’ defense is fragile, too, as they are surrendering 90.6 points per contest this postseason. The Sun should shoot the ball well at home, so I’m backing the over.

All previous three games in this series went in the over, as well as eight of the Sun’s previous 11 games overall. Likewise, the over is 7-1 in the Mystics’ previous eight outings. Washington is 8-4 SU and 5-7 ATS in its last 12 games on the road, while Connecticut 12-2 SU and 8-6 ATS in its previous 14 games at home.