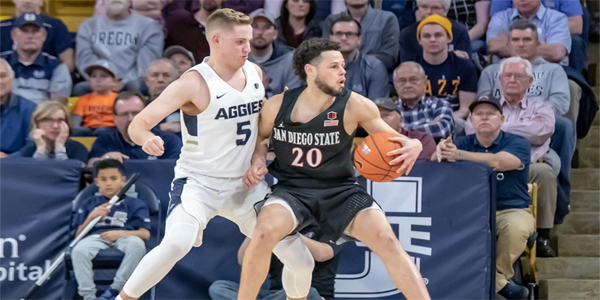 If you like appetizers, we have a lot of them before Sunday’s main course, the Super Bowl. Another locked and loaded college hoops card is on the way for Saturday with a cornucopia of betting options. It can be easy to get lost in these Saturday cards. I’ll point you to an article that I wrote a couple of years ago and how to bet these big Saturdays in college hoops. Even though the post date is in the past, the information still helps in the present and will in the future.

As with any Saturday card, it is a busy one for the situational betting article, including one of my favorite spots of the week, so I encourage you to give that a look.

The Saints came marching in for us last night with Siena’s huge win over Iona, so we’ll hope that tonight is the start of another good winning streak on the hardwood. Our spotlight game today is not an easy choice. A lot of the ranked battles are during the daytime. I seriously pondered taking the Stephen F. Austin vs. Sam Houston State game to show it some love, but that happened in the situational article and in yesterday’s segment with Greg Peterson on BangTheBook Radio.

So, we head to the revenge game in the Mountain West Conference between Utah State and San Diego State. The Aztecs are a dwindling favorite in the marketplace right now with BetOnline the first sportsbook to go to -6.5 after the -7.5 opener. The total for this tilt in San Diego is 130.5. Most of the market is sitting 7 at time of writing, so that will be our consensus line, but highlighting BetOnline is a reminder to shop around for the best line at all teams and that means having an account at multiple outs.

It sure seems like San Diego State’s betting britches are getting a little too big. You’re paying a premium on the Aztecs right now, who may be a touch overrated at the premier college basketball analytics websites of Bart Torvik and Ken Pomeroy. Torvik, in fact, has this game lined in double digits, but as you see, it opened 7.5 and has been bet down by some early sharp money.

The trend line is finally pointing up for Utah State. Air Force, Colorado State, and Wyoming are a mixed bag, with the Rams the best of the bunch, but Utah State has won those games by 25, 16, and 23. The overtime loss to Boise State came after a week off and after a win over Nevada that seemed to balance out the SS Aggie a little bit. Let’s see if Utah State can exact revenge for the 77-68 home loss to San Diego State back on January 4.

There is something of an anti-San Diego State sentiment forming in the marketplace, even though the Aztecs have done nothing to deserve it. They did struggle a little but with UNLV in Las Vegas on January 26, but responded in enormous fashion with a perfect game against New Mexico in Albuquerque in a 28-point victory. The Aztecs had their second-best offensive showing of the season with 1.308 points per possession and held New Mexico to just .877 PPP. What more could you ask for from this team?

Anytime you have an undefeated team this late in the season, there is a rush to fade that team. Sure, the lines are a bit on the high side, so there is some “value” in going against them. But, more than that, it’s almost like we root for teams to fail in the betting market. More often than not, we are betting against a team and not betting for a team. Nobody expected SDSU to be this good and the mounting pressure with each passing game to run the table is something that the Aztecs most certainly have to contend with.

Utah State just hasn’t been the same team. Maybe Craig Smith gets them there and they have played significantly better over their last five games. The Aggies are 255th in 3P%, which does make it very tough to pull off upsets. They are at 52.3% from 2 and rank in the top 60 in 2P% defense. They are good in a lot of categories, but not great, which is how they reached such a high point last season.

For most of the year, Sam Merrill hasn’t seemed healthy, but he did have his first 30-point game of the season in the overtime loss to Boise State and is trending up rather significantly at this point in time. Merrill did have 26 of his team’s 68 points in the loss to SDSU, but he was only 3-of-12 from 3 and 5-of-9 from 2, including 1-of-4 in the midrange game. His jump shot has been off for most of the season.

The difference in the first game was that San Diego made three more threes. The Aggies made two extra free throws to make up for having one less two-pointer. San Diego State also led by as many as 16 in that game and basically went wire-to-wire. They were the better team by a large margin.

However, Utah State is one of just four teams to score at least one point per possession on the Aztecs this season. The others are BYU, Iowa, and UNLV. If Utah State has similar offensive success and fares a bit better defensively, they can cover this number. My guess is that is the approach to this game from sharper bettors and the reason why Utah State has taken the early money.

The problem I have is that Utah State is shooting 26.2% from 3, which ranks 220th in the country. San Diego State is an extremely efficient offense and it would be in Utah State’s best interest to keep pace, not try to stop the Aztecs. In road conference games, Utah State is even worse from 3, shooting 25.2%.

This time, I think there is something out there that I may not see. I went against the early money last night for Siena and have done so a few times throughout the season in these spotlight previews. I don’t think I’m going to do that here. This should be a fairly low possession game in the 67 or 68 range and I think it will be tougher for SDSU to get margin and play from in front with such a big lead. That will keep Utah State in it until the end to get this cover of +7.

NBA Betting — Mavs vs. Lakers: MVP Duel Between LeBron and...