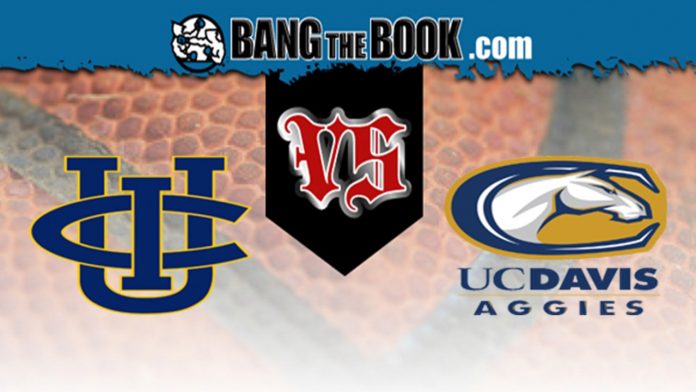 The last time the Anteaters played, they beat the Cal Poly Mustangs, 74-67. With 12 points and eight rebounds, Brad Greene played well for UC Irvine. The Anteaters held the Mustangs to an effective field goal percentage of 0.381 (below their season average of 0.473) and had an offensive rebounding percentage of 45.7 (above their season average of 34.5).

The Aggies are hoping for a better outcome after their 76-75 loss to the Hawaii Rainbow Warriors in their last outing. Ezra Manjon led UC Davis in scoring with 22 points on 9-for-15 shooting. Hawaii had an offensive rebounding percentage of 34.5 (above their season average of 28.6). UC Davis, meanwhile, had a turnover percentage of 11.4 (better than their season average of 17.5).

Both teams have had a player heat up over their last five games. For the Anteaters, it’s been Evan Leonard, who has averaged 14 points,1.4 steals, while the Aggies have received great contributions from Manjon (17 points,1.2 steals).

This is the first time these teams will go head-to-head this year. The Anteaters won both contests played against each other last season. In the last game, UC Irvine won 64-48. The Anteaters dominated nearly every facet of the game. They had a fantastic offensive rebounding percentage of 39.1 and an effective field goal percentage of 0.544. The Aggies put up marks of 18.6 and 0.330, respectively, for those same stats.

Western Conference Playoffs — “Numbers Guys” Not Adding Up For Thunder