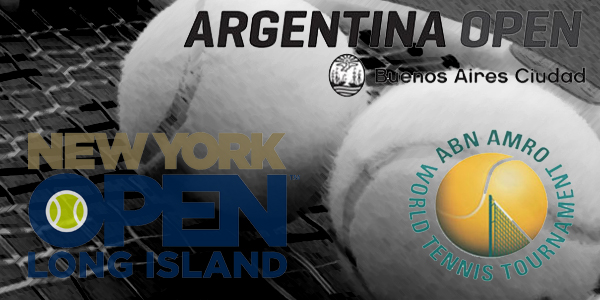 We’re into the heart of the Golden Swing and indoor tennis, with three separate tournaments on three different continents and in three different time zones. So, buckle up, there is tennis everywhere!

The big one on the calendar this week is in Rotterdam, Netherlands, on indoor hards. And these are usually slower indoor hards too, with less than the normal number of tiebreaks you’d expect from an indoor tournament with 31 matches. The slower courts have provided for some surprise semi-finalists in the past few years with Pierre Hugues-Herbert, Andreas Seppi, and Martin Klizan making deep runs. With the tournament being a 500 level event each quarter usually has a dangerous ‘floater’ in addition to the seeded players and that depth has led to the event being won by players outside the top four seeds and providing some true surprise winners here. The vast majority (10 of the last 16) of the semi-finalists, be they from the top four seeds or not, have elite stats — combined hold/break numbers that cross the 105% threshold, so we’re looking for those. We’re also looking for players who excel indoors and preferably, we want our choice to be one of the ‘floaters’ just described above (elite talent but not a top-four seed and therefore hopefully a bigger price).

The top quarter is dominated by Daniil Medvedev. He’s come up short against Djokovic and Wawrinka so far this year but, he is still the cream of this crop. At +275 though, there are too many landmines and there is too much history of players outside the top four winning to entertain this. Pospisil is playing great tennis, Krajinovic is solid indoors, and Rublev has been one of the hottest players on tour in 2020. If anyone is appealing in this quarter, it is Rublev. He should be able to get through his first two matches against Basher and Barrere and be facing either Kraj or Meds in the quarters. At 8/1 (or +225 to win the quarter) he is probably your best bet up here.

The second quarter has some really interesting options; Montpellier champion Gael Monfils, Gilles Simon, Karen Khachanov, Fabio Fognini and qualifier Philipp Kohlschreiber. Loaded. Kohl is probably a little past it at 36; Fog is skipping the Golden Swing for the first time since 2012 so there is no telling where his motivation level is at; Simon has 14 titles and 3 of the last 4 have been indoors but all of his titles are 250 level events — he’s not beating four players of this calibre in one week; Monfils is coming off a title last week and he’s never won multiple titles in a season let alone two in a row. That leaves Karen Khachanov. KK struggled all through 2019 but has shown some signs of busting back out early in 2020. He went 4–1 at the ATP Cup and lost an epic late-night match to Nick Kyrgios in Melbourne. Despite his meandering 2019, it’s really hard to forget his 2018, where he won three titles, all on indoor hards (one in this part of the calendar in Marseille and one in Paris over Djokovic). Khachanov’s combined hold/break numbers are just about where we would want them (105% this year) and his tiebreak record, while not at 0.500, is getting close at only 23 years of age. His price is much better than Rublev’s and he doesn’t have Medvedev in his quarter. At 14/1 this is the best option in the top half.

In the bottom half the fourth quarter looks wide open, with struggling players such as Tsitsipas, FAA, Shapo, and Dimitrov. How to pick a winner there? Instead, let’s look in the third quarter where top seed David Goffin should be opposable. The rest of quarter looks beatable too with youngster Jannik Sinner, wild card Robin Haase, and lower-ranked players Radu Albot and Adrian Mannarino. Roberto Bautista Agut has started to play the kind of tennis that can win at the 500 level in the last two years (won Dubai in 2018 and beat Djokovic twice in 2019) and if he can survive countryman Pablo Carreno Busta (4–2 h2h), he should be able to come out of this quarter. RBA has the combined hold/break stats we’re looking for (over 105% every year), he’s 8–1 in 2020 with his only loss being an epic five-setter with Cilic at the Aussie and he’s a winning tiebreak player with the ability to break serve on these slightly slower courts (39% so far in 2020). His price is commiserate with Khachanov’s and he’s the pick in the bottom half.

New York is the easiest handicap on the ATP Tour. And probably the easiest handicap for any bettor in 2020. This tournament has been around for two seasons and in those two seasons, the finalists have included Kevin Anderson, Sam Querrey, and Reilly Opelka. See a trend? The semi-finalists have included Querrey twice, Anderson, Opelka, Isner, Nishikori and two outliers — Mannarino and last years finalist Brayden Schnur. See a trend? Be big, serve well, and win tiebreaks.

Isner, Anderson, Opelka and everyone’s favorite serve bot Ivo Karlovic are all here and they all landed in the top half of the bracket. That sucks for them. Start flipping coins.

Milos Raonic is all alone in the bottom half of the bracket. He played extremely well at the Aussie, falling to Novak in the quarters; he has maybe the most dynamic serve on tour; he holds serve over 90% of the time (91% last year, 97% so far in 2020); and he has improved his ability to break serve (maybe just because he is finally healthy?) as he has broken his opponents 19% of the time in 2020, far more than his four fellow servebots in this draw. Lastly, and this is maybe a little abstract, he has had success in this portion of the calendar before. New York was previously Memphis and Memphis was previously San Jose. Do you know who dominated San Jose when it was part of the tour? The last three San Jose tournaments, before it moved to Memphis, were won by Milos Raonic. His price is not sexy but we can double down on this one!

Buenos Aires is the elder statesman of the Golden Swing and one of the oldest tournaments on tour, this being it’s 99th season. It spent the better part of a decade being won by strictly Argentinian and Spanish players but the emergence of Dominic Thiem and the surprise of Marco Cecchinato last year means just about anything can happen here. That being siad there are eight Argentines in the draw, six Spaniards and another five South Americans in this years draw. Two of the three favorites by price played in the Cordoba final on Sunday night and with the complete absence of players winning back to back titles on the Golden Swing we’ll start by eliminating them (even Rafa and Ferrer, nor Cuevas in his prime, were able to accomplish this). Pella is a prime candidate, being Argentinian, having made the semis here last year, and being a title winner on the Golden Swing in previous years. But, if you saw his performance against Moutet in Cordoba you would be plenty scared off of him, especially at 7/1.

There are only five players in the draw that are not coming from Cordoba, which also means there are only five players who don’t have to acclimatize to that change in altitude. Borna Coric and Dusan Lajovic are on opposite sides of the draw, both excel on clay, both have combined hold/break numbers on clay that surpass 105% in each of the past two seasons, and both have clay titles in the recent past and both should be well-rested. Coric has not played solid tennis in almost two years and this break from his regular routine of Euro indoor tennis is maybe just what he needs — clay is his best surface and his draw, in the second quarter, is super manageable. Lajovic proved last year, with a title in Umag and a final in Monte Carlo, that he can compete on clay with the big boys.

No. 13 Wisconsin vs. No. 9 Minnesota College Football Betting Pick...

Odds On What The Future Holds For Tom Brady