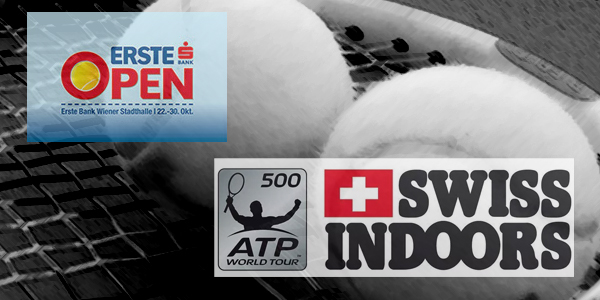 The penultimate week of the tennis season is upon us and we get two rather star-studded 500 level events in the run-up to the season’s end in Paris. Sixteen of the worlds top twenty are out in force and the split between the two events is pretty even. You would think that makes things compelling on both ends of the spectrum but, really we’re only handicapping one tournament this week. The Roger Federer Open in Basel doesn’t need a whole lot of work.

The tournament in Basel, Switzerland has been blessed with attendance from Roger Federer in almost every season of his career. He’s been here 18 times in 22 years. It’s safe to say this is his home away from home. His level of success here is almost unparalleled. This is Rafa at Roland Garros-like domination. It makes the tournament almost impossible to handicap. Let’s eliminate the two seasons in 1998 and 1999 when Fed was a teenager. From 2000 to 2018 there has, obviously, been 19 editions. Federer has made 14!!! finals (winning 9!!! titles)and skipped the event three times. So, only two times in the past nineteen years has Federer NOT made the finals here. His reasons for skipping it were an injury in 2016 and what looks like big bags of cash from tournament directors in Thailand to get Federer to make treks to the Far East after the US Open. His losses in 2002 and 2003 look to be scheduling related — in 2002 he played the Davis Cup, Moscow, Vienna, Madrid and Basel in consecutive weeks after the US Open, the last time he ever did that crazy travel; and in 2003 it was the Fed break-out year, winning seven titles including Wimbledon. Since rectifying scheduling and getting used to winning Slams… he hasn’t lost prior to the final here. Don’t expect anything different this year. Fed’s struggles at the US Open and in later season events as he ages has been well documented. It would appear to not apply here. The draw won’t be easy, as he potentially has to go through Wawrinka, Tsitsipas and Zverev in consecutive matches but, he gets to start with a qualifier to warm up and he has a reason to get each guy, Stan being a fellow countryman who he has dominated and Tsitsipas and Zverev being #nextgen’ers who has dealt him a loss at a big event this year. Fed should be up for this and history shows no reason or sign to point to him not being able.

Speaking of Tsitsipas and Zverev, if you have access to quarter prices, especially for Tsitsipas, you should hit those. Tsitsipas got a quarter filled with clay courters and he is playing in great form at the moment with deep runs in both Beijing and Shanghai followed by a week off last week to rest up for Basel. As for Zverev, his draw is a tad tougher but, he showed in Shanghai, he is rounding back into dominate form.

The Vienna Open is much more wide open than Basel. All four big seeds are priced under 10/1 and given that this tournament is usually a pretty chalky finish, being won by the likes of Kevin Anderson, Murray, Delpo and Tsonga in the last ten years, we’ll be looking at one of these four. Additionally, going back to the 1990’s none of the champions here in Vienna have held serve less than 80% of the time on hard courts. Big servers and big names as players warm up for Paris.

The first quarter is loaded so, Thiem is out. The home-town boy gets a tough match-up with former champ, and three-time finalist here, Jo Tsonga in the first round. There is no guarantee, with a less than 0.500 record in Vienna, that Thiem even survives that. Stockholm champ Shapo is in this quarter as is PCB, who made a deep run of his own to the semis in Stockholm. Lastly, Nic Basilashvili lurks in the first quarter. He plays equally well on clay or hards and could be a tough out.

The second quarter is headlined by Matteo Berrettini but, 8/1 is probably a little low for a guy who has never won a hard court tournament. His hard court stats have come up fast and he is great in tiebreaks so it wouldn’t surprise if he comes out of the quarter. The price just seems low. If Rublev carries his form from Moscow, if Raonic is healthy or if Dimitrov can find his game from Flushing Meadows than this quarter is suddenly super difficult. Milos is actually a decent option if you believe he is healthy. There is no telling with that guy though and it’s probably best to wait till 2020 with the big Canadian.

The whole bottom looks much more appealing than the top half. The fourth quarter is wide open. Khachanov, Querrey, Fucsovics, and DSS are all having less than stellar years. They all the have the game to come out of here though and given KK’s recent troubles, a quarter price on Querrey is probably a great option for a surprise. The American is great on indoor hards, played well last week and could take advantage of an inconsistent Khachanov.

The third quarter contains the outright pick for the week. Monfils has had a rough stretch after the US Open but, he has all the requisite hallmarks of an indoor champ. He has been to the final here before, he has won an indoor 500 level event earlier this year, despite playing in each of the past four weeks he hasn’t made any progress at any of them so he should be pretty fresh. His hard court hold/break numbers are amoung the best in the field, he is great in tiebreaks and he has maybe the easiest quarter. Two qualifiers, an 18 year old coming off a long run last week and some elder statesmen. At 8/1, he is right in the ball park.

NFL Betting — Answers May Not Be Close at Hand For Jets

NFL Betting — Answers May Not Be Close at Hand For Jets