Home NFL Picks & Betting Articles Super Bowl 2020 Prop Bets — What Will the Niners Do With... 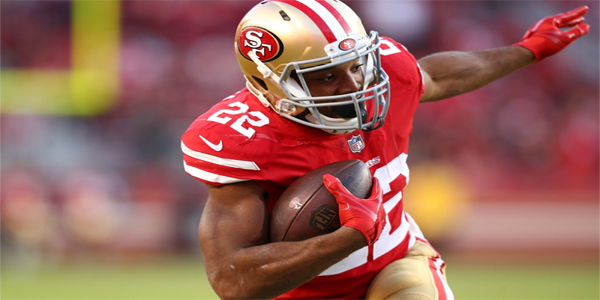 One of the perceived strengths of the San Francisco 49ers involves their backfield, which is deep indeed. And as they have seen this team get to the Super Bowl by throwing the ball just 27 times in their two playoff games, NFL football bettors see that they can play at a championship level by powering their way past the opposition.

One part of that backfield is Matt Breida, an undrafted free agent who did his own share of muscling his way into the lineup last season amidst a number of injuries to running backs.

Will he be a major factor in the biggest game of his life? We won’t know that, we suppose, until he takes the field in the Super Bowl, which takes place on Sunday (Feb. 2) at 6:30 PM ET at Hard Rock Stadium in Miami Gardens.

Remember that while BetAnySports customers are following the success (or lack of same) of their props, they can also place wagers on the game in progress as they access what is available through Sports Betting Ultra.

Breida came out of Georgia Southern, a bastion of triple option activity. And he was ready to take the ball and run with it last year when required. As everyone knows, head coach Kyle Shanahan regards the ground game as mandatory, and when injuries in the backfield, including one to Jerick McKinnon, seemed to take him out of that game plan, Breida is the guy who actually held things together, averaging an exceptional 5.3 yards per carry and showing some ability to catch passes out of the backfield.

This season the Niners had more of a “committee” feel about them when it came to carrying the football. That’s okay; Breida is not a big, bruising back, and has found himself susceptible to injury, and even though he is known to play through some pain, he can’t handle the load on his own.

But perhaps a fair question, considering recent circumstances, is whether Breida is going to handle ANY of the load.

What will happen when (and if) he carries the ball the first time? BetAnySports has posted a prop to challenge its patrons:

There are a couple of developments that could have an impact on how this prop turns out.

One of those involves the fact that Tevin Coleman, who had 105 yards on the ground against Minnesota, dislocates his shoulder against Green Bay and had been listed as questionable. However, after Kyle Shanahan had mentioned that Coleman had “a chance to play,” he was participating in full practices and had the non-contact jersey taken off. So he should be ready to go. Of course, when he carried 22 times against the Vikings, that was a career high. So there’s some sharing that will go on.

Whether Breida will be a beneficiary of that sharing is another question. You see, when Coleman went down, Raheem Mostert stepped in and carved up the Green Bay defense for 220 yards. So he is the “hot hand.”

And Breida is decidedly not.

Breida has caught 19 passes this season – not a lot. But he’s got a catch rate of 86.4%, so there is some value to having him in the game at some point. But he seems to be something of a forgotten man in this offense. He fumbled in the second half against Minnesota (where he gained 17 yards on eight attempts), and was on the field for only two offensive snaps against the Packers. Over the last five games, he’s had a total of 34 offensive snaps, over which time he’s had 17 carries for exactly 46 yards.

So the part of this prop that refers to “no rush attempts” isn’t a joke.

Still, I don’t think he’s going to be shut out. He may not be the guy you’d want pass-protecting against the Kansas City blitzes, which will come, but when he carries the ball, he has a tendency to make it mean something. This season he’s logged it 123 times and averaged 5.1 yards a carry. The Chiefs, despite an improvement, have nonetheless been in the bottom half of the league in run defense efficiency, even during their best stretch of the season. So I’d rather be on the “take” here, with a +130 price that his first carry will be OVER the 3.5-yard threshold.

Want Super Bowl props? Well, BetAnySports has got ’em. In fact, they’ve got more than you could possibly handle. And they also have reduced juice so you don’t have to lay the standard -110 on the pointspread or total. And you can keep the going and going with Sports Betting Ultra…….. To open an account, use your debit or credit card, person-to-person transfer or the virtual currency of Bitcoin, which is fast and easy with their automated system, and NEVER incurs a transaction fee!