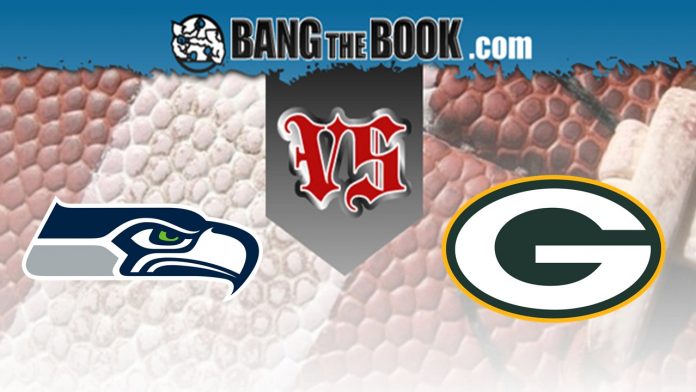 The Green Bay Packers should feel very thankful that they didn’t have to play Wild Card Weekend. Sure, they would have played a Minnesota Vikings team that they beat twice during the regular season, but most people would have had the 49ers and Saints in the top two spots in the NFC if they were to rate the conference. The Saints are now gone and the Packers got to enjoy a week off in preparation for Sunday’s game at Lambeau Field.

When you look at this Seahawks vs. Packers game, you see two teams that the market wants to fade. This Seattle team went into the playoffs with 5.7 yards per play on offense and 6.0 yards per play allowed on defense. Green Bay also came in with a negative yards per play differential with 5.4 on the offensive side and 5.7 on the defensive side.

There were a lot of questions as to whether or not the Packers would face the Seahawks or the Eagles. Seattle was a road favorite throughout the week, but enough late money hit the board on the Eagles to make Philadelphia a closing line favorite at most shops. Unfortunately for Eagles fans and backers, the swarm of injury bugs that has encircled the team most of the season showed up at the worst possible time again and bit down on Carson Wentz.

The Seahawks won 17-9 in what felt like a carbon copy of the first game between the times, and by that I mean ugly and not exactly confidence-inspiring. But, Seattle moves on and heads to take on what would appear to be a very vulnerable division champ in the Packers. Statistically, Green Bay does not look the part of a 13-3 team, but Matt LaFleur’s team has the opportunity to quiet the doubters, at least for one week.

The spot isn’t great for the Seahawks, who entered last week’s game against Philadelphia with a litany of injuries of their own. As they often seem to do, they found a way to win. That “way” is named Russell Wilson. The defense caught a break by facing Josh McCown and a banged up collection of skill players, but Russ still had to make plays and that’s what he did. Officially, Wilson accounted for 363 of the team’s 382 yards. He was sacked once for a loss of nine yards, threw for 325, and ran for 45 more.

As mentioned, neither one of these teams would be considered a “play-on team”. In fact, both are fade teams with negative yards per play differentials. The Packers were +63 in point differential at 13-3 and the Seahawks were just +7 at 11-5. The quarterbacks seem to be the saving graces for these two teams, but Aaron Rodgers really didn’t have a very good season.

The future Hall of Famer took excellent care of the football, as he often does, with just four interceptions, but he also had one of the lowest net yards per pass attempt of his career. He threw for over 4,000 yards again and spread the ball around as he often does, but the Packers offense just didn’t seem to click at times. Rodgers’s heavy reliance on Davante Adams was on display most of the season. Adams missed four games and still wound up with 127 of the 542 targets and 83 of the 356 receptions.

Aaron Jones had a strong season with 4.6 yards per carry and 16 rushing touchdowns. The Packers just weren’t very explosive. They were methodical. They were pretty decent on first and second down, but below average on third down. They were also much better at home, where they averaged 2.22 more yards gained per play.

Getting off to a good start is essential for the Packers. They averaged 7.82 yards gained per play in the first quarter. After that, they fell to 5.87, 6.92, and 5.74. Green Bay scored 15 offensive touchdowns in the first quarter and 29 over the other three quarters combined. They better be ready to go right away off the bye week here. They weren’t ready after their regular season bye and got hammered 37-8 by the 49ers in a game where Rodgers threw for 104 yards.

The injury report for the Seahawks still looks daunting. Duane Brown, Mychal Kendricks, and Mike Iupati range from out to doubtful this week. The running back situation won’t improve because Chris Carson, Rashaad Penny, and CJ Prosise are all on IR. At least Russ and DK Metcalf are healthy. It will take a huge effort from those two guys once again if the Seahawks are to advance.

They might get it. The Packers don’t pressure much and don’t have a great pass rush. Their Hurry% ranked 30th in the NFL per Pro-Football-Reference and they were in the bottom half of the league in Pressure%. That will give Wilson all sorts of time to improvise. The Packers actually did really well in coverage, which is how they overcame a marginal pass rush. Opposing QBs only completed 59.7% of their passes. Only New England and Baltimore were better in that department. With no running game to speak of, it will be on Wilson’s shoulders to move the chains.

These are both fade teams, so I don’t really want to trust either one of them. The -4 line looks a tad high, but given the spot, another road game, and what Lambeau Field is like in the playoffs, you can get there with some basic mental gymnastics. The under just looks like the play here. Despite all of the pass plays we’re likely to see from Seattle, the Seahawks move at a slow pace. Green Bay will look for balance in this one. The early forecast looks fine, just really cold.

It’s just hard to see a shootout here with two teams that just look pretty average despite the gaudy records.