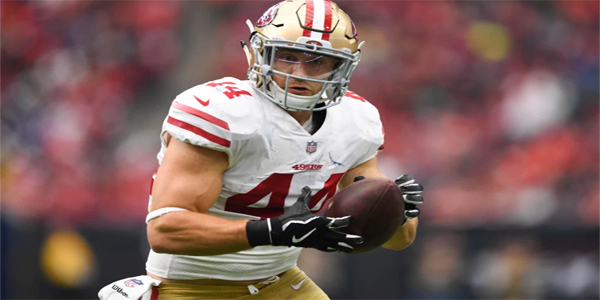 Creativity may be required to figure it all out with the San Francisco 49ers in the prop betting market. When it comes to the Kansas City Chiefs, we know who will be involved. We just have to figure out which players will be involved the most.

With the 49ers, we know Raheem Mostert and George Kittle are going to be big parts of the gameplan. Beyond those two, somebody else will have to step up in all likelihood. You would think that Andy Reid and Steve Spagnuolo wouldn’t let just Mostert and Kittle beat them with two weeks to dig into the film and the matchups.

We would also think that an offensive mastermind like Kyle Shanahan would figure something out to free up other skill position guys. Two similar situations with two very different outcomes. With the Chiefs, we are trying to figure out who will be featured in the most prominent way. With the 49ers, we know who those two guys are. We just need to handicap the supporting cast to see who else has a big impact in the big game.

This look at the San Francisco 49ers team and player props will attempt to answer just that. As always, shop around for the best prices. Not all of these props are listed at every sportsbook, but more and more shops will post these player options as the week goes along. For now, find the ones that do. Keep an eye out for the ones that don’t. And make sure that you find the best odds and the best lines because every yard and every cent of juice matters.

Kyle Juszczyk Rushing Attempt Yes (+360, 5Dimes Sportsbook) – Let’s get wild right off the jump. Whether or not Tevin Coleman plays, I think there’s some interesting value on this prop. When Coleman went out in the NFC Championship Game, Matt Breida only had two offensive snaps. For whatever reason, Breida seems to be in the doghouse or the outhouse or just doesn’t fit into what the 49ers are doing these days.

Kyle Juszczyk had 40 offensive snaps out of 55 and had 50 of 71 the previous week against the Vikings in the Divisional Round. I fully realize that Juszczyk had three carries in 12 games during the regular season and has zero in the two playoff games. Doesn’t this seem like a good wrinkle for a genius like Shanahan to throw into the gameplan? A nice little fullback dive into the teeth of the defense after a Raheem Mostert off-tackle run?

Seven of Juszczyk’s 18 carries as a member of the 49ers have gone for first downs. There could very well be a short-yardage situation that calls for something that the Chiefs defense is not expecting. If Breida isn’t going to see the field much and Coleman is going to be limited or simply not play, does this really seem that wild?

You can also find this at BetDSI Sportsbook at +295, but other shops should open something similar throughout the week.

Emmanuel Sanders Longest Reception Over 16.5 Yards (-120, 5Dimes) – This one is -145 at DSI Sportsbook, so maybe somebody is betting the over, but this one does make a fair amount of sense. Sanders has played 86% and 75% of the snaps in the first two playoff games, so he will be out there and will get some opportunities. The Chiefs are susceptible to tight ends in the middle, so that likely means some more attention paid to George Kittle. That would also mean more single coverage for Sanders.

Since Sanders went from Denver to San Francisco, his yards before catch per reception have gone up from 8.3 to 10.8. Sanders is getting few yards after the catch, which is mildly concerning, but his depth of target at the time he gets the ball is deeper than it was with the Broncos. Also, as one of the few players with some experience in a game of this magnitude, I can’t help but wonder if it makes Jimmy G comfortable to throw in his direction.

Sanders hasn’t been very busy of late and may not have many cracks at this, which is why some are likely skeptical of the line, but the 49ers may actually need to throw in this game.

Team to Score First San Francisco (-110, DSI) – As we know, the Chiefs have gotten off to slow starts in both playoff games. They scored zero first quarter points against the Texans and scored with one minute left in the first quarter in the AFC Championship Game. Both teams are likely to start tight and jittery in this one, but the 49ers run the ball and the Chiefs mostly throw the ball. Timing could be off. Throws could be high. The ground and pound seems like a sound strategy in the early going.

These are two brilliant offensive minds and I expect the set of scripted plays to be effective both ways. I just have a real mancrush on Kyle Shanahan and think that he’ll have something drawn up that is very, very strong.

The Chiefs have scored on 10 of their 18 first drives, but did fail to score against Baltimore, Green Bay, Minnesota, and New England in the regular season and in their two playoff games.

Do yourself a favor and take a look around BangTheBook.com to find all of our prop betting coverage. We have a lot of it and it will certainly help you with the big game.

Waiting for MLB Lineups before Betting!