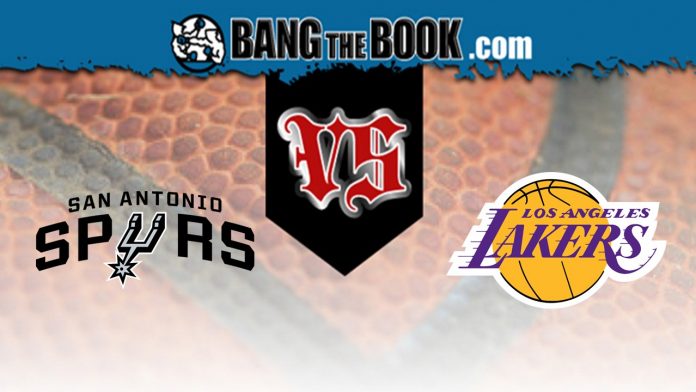 In the Spurs’ last matchup, they lost a tough one against the Los Angeles Clippers, 108-105, but did cover as 8.5-point underdogs. With 27 points on 9-for-17 shooting, LaMarcus Aldridge was the game’s leading scorer. Los Angeles did an excellent job of converting from the charity stripe (19-24; 79.2 percent). San Antonio, meanwhile, had a turnover percentage of 5.6 (better than their season average of 11.1). The two teams combined to score 213 points, which was just under the projected point total of 214.5.

The Lakers will look to keep it rolling after comfortably covering the 7-point spread against the Sacramento Kings in their last outing, 129-113. Los Angeles’ LeBron James played an enormous role in the victory, racking up 15 points, 11 assists and 10 rebounds on his way to his 10th triple-double of the season. Los Angeles played a nearly flawless game. They had a phenomenal effective field goal percentage of 0.622 (above their season average of 0.546) and a free throw rate of 0.256 (above their season average of 0.195). For those same stats, Sacramento put up marks of 0.505 and 0.231, respectively. The two squads combined to put up 242 points, which was well over the projected point total of 225.5.

The high-powered offense of Los Angeles (fifth in the NBA with an offensive efficiency of 111.2) will go head-to-head against the bottom-tier defense of San Antonio (21st in the NBA with a defensive efficiency of 110.1). The Lakers figure to have the edge on that end of the court. Moreover, the Spurs rank third in turnover percentage (12.0 percent), while the Lakers rank fifth in opponents’ turnover percentage (14.5 percent).

These two teams have met twice already this season, with the Lakers winning both. In the most recent game, James scored a game-high 33 points and the Lakers beat the Spurs 114-104, covering as 4.5-point favorites. He also put up 14 assists. The two teams combined to put up 218 points, which was just 4.5 points below the projected point total of 222.5 points. The Lakers played a nearly flawless game. They had an absurdly low turnover percentage of 8.5 and a solid effective field goal percentage of 0.573. The Spurs put up marks of 12.1 and 0.523, respectively, for those same stats.

Los Angeles is 2-3 ATS with 3 overs and 2 unders in its last five games.

Over its past five outings, San Antonio is 3-2 ATS with 3 unders and 2 overs.

The Lakers’ average margin of victory in their last five games has been 2.8, down from 7.1 for the season.

ACC Basketball Picks — No Excuse For the ‘Cuse If They Can’t Shoot vs....

College Basketball Betting — Big Monday: Texas Tech Back on the Floor vs. West...