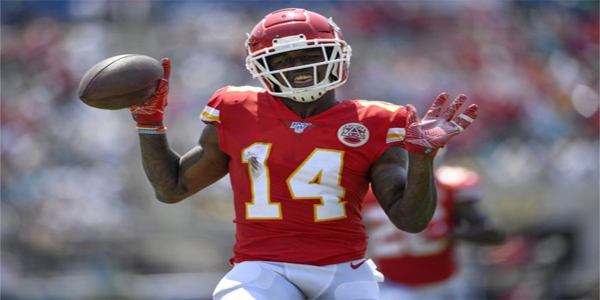 Sammy Watkins had a huge outing in the 2019 season opener, but really didn’t break out again. Well, at least until the playoffs. Now, he’s coming off two very productive efforts, and they seem to be coming at the right time as the Kansas City Chiefs head to Super Bowl 54 against the San Francisco 49ers.

The game will be kicking off at 6:30 PM ET at Hard Rock Stadium in Miami Gardens. If you’re a BetAnySports customer you’re in luck, as you can not only get reduced juice before the game starts, but real-time wagering once things are underway, owing to the state-of-the-art software from Sports Betting Ultra.

When the Chiefs began the season against the Jacksonville Jaguars, Watkins looked as if he was on his way to being an All-Pro, as he caught nine passes for 198 yards, with three TD’s, including scores from 68 and 49 yards.

As it turned out, that game constituted 17.3% of his receptions and 29.4% of his yardage in the regular season. In no other regular season contest did he have more than 64 yards.

And then the playoffs happened. And in those two games, Patrick Mahomes found him nine times for 190 yards. That included a 60-yard touchdown connection that helped salt away the 35-24 victory over the Tennessee Titans in the AFC title game.

So will the Chiefs continue to look to him for big plays? Or will a guy who caught just 12 passes in his last six regular season games be lost in the shuffle?

Here are a couple of props from BetAnySports that ask Super Bowl bettors to examine his production:

Pundits talk about Watkins’ value in the lineup, as a guy who can make big plays or be a possession-type receiver, and takes some of the pressure off Tyreek Hill. With a 4.4-second 40-yard dash, he is fully capable of attracting the attention and respect of opposing defenses.

Injuries have often been a concern for Watkins. He actually hasn’t played a full 16-game season since he was a rookie with the Buffalo Bills. Last year he only played seven full games, but it’s worthwhile to mention that during those games, he was targeted more than Hill.

Needless to say, wherever he’s been, whether it’s with the Bills, Rams or Chiefs, he’s been very useful when healthy. And the guy is still only 26 years old.

He averaged 12.9 yards a catch this season. And in case you’re interested, he had a relatively low catch rate of 57.8%.

You can look at this thing from a couple of angles, when it comes to evaluating which way to go with the prop. On the one hand, when you see that the guy has been targeted three times or less in four of his last eight games, it would be pretty hard to back the “over” on that proposition. We would pass there. But on the other hand, he’s been in four post-season games with KC and had 366 receiving yards. So as far as yardage is concerned, we’re inclined to go OVER.

If you want to operate on the assumption that with extra time to lay out a game plan, the 49ers would pre-occupy themselves more with figuring out a plan for slowing down Hill and Travis Kelce, then Watkins suddenly appears as a receiver Mahomes would seek out. After all, it’s very hard to blanket everybody at once. He has gone over the posted receiving yards figure nine times in the 18 games he has played.

But he isn’t the slightest bit unhappy about waiting for his number to be called. “One of the best decisions I ever made in my life was coming to this team,” he says. And of course, with a $19 million salary, what’s to be unhappy about?

If you want to look at an interesting numbers angle, here’s his touchdown prop:

What’s so interesting about this is that the touchdown he scored against the Titans last time out was the first since that season opener, meaning he went sixteen games without crossing the goal line. The “No” part of this prop essentially says that there is a 76% chance he won’t score a touchdown, so you may find some value in that.