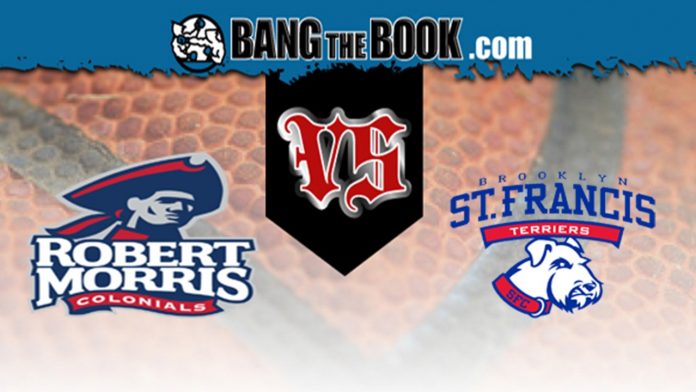 The last time the Colonials played, they were victorious over the Sacred Heart Pioneers, 67-55. AJ Bramah led Robert Morris in scoring with 18 points on 9-for-9 shooting. The Colonials, who came into the game averaging an effective field goal percentage of 0.513, had a great mark of 0.565 and had an offensive rebounding percentage of 39.3 (above their season average of 30.1).

The Terriers are hoping for a better outcome after their 59-39 loss to the Mount St. Mary’s Mountaineers in their last matchup. Rob Higgins led St. Francis Brooklyn in scoring with 13 points on 5-for-14 shooting. Mount St. Mary’s did a fantastic job of making free throws (19-26; 73.1 percent). St. Francis Brooklyn, on the other hand, held the Mountaineers to an offensive rebounding percentage of 20.0 (below their season average of 31.5).

These two teams have already met once this season. The Colonials won 78-52. Robert Morris’ effective field goal percentage was its largest strength over St. Francis Brooklyn. The Colonials had a rate of 0.619 while the Terriers posted a mark of 0.397. Josh Williams scored a game-high 20 points.

The Terriers’ average margin of defeat in their last five games has been 9.0, up from 1.9 for the season.